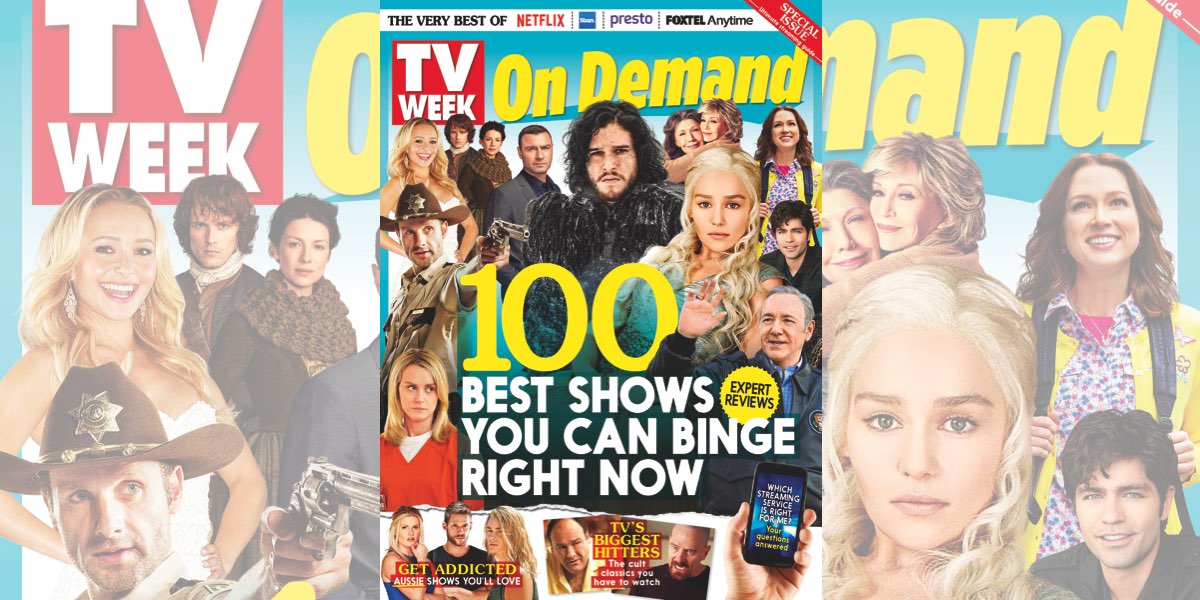 While some have embraced streaming TV quickly, there are others who are still trying to figure out exactly who that Stan fellow is. TV Week is hoping to attract both groups of viewers with its new one-off streaming video special edition magazine.

TV Week On Demand, which goes on sale on 6 June, seeks to inform its readers about everything they need to know about streaming TV, from how to set up and sign into streaming video services like Netflix, through to which shows are available on streaming video platforms.

“We saw a gap in the market,” explained TV Week editor Emma Nolan. “TV viewers are craving information about these streaming services. We do a little bit in TV Week, but obviously there is a lot of information out there.”

In addition to everyman guides that explain how to watch internet video on lounge room TV sets, the magazine also provides advice for its readers on related issues. For example, there is a feature on what is available for kids on streaming television services and how to keep children safe while navigating on-demand content.

If the special is a success and TV Week readers react positively to it, one should expect to see a greater focus on streaming TV in the future. Nolan admitted that the magazine will serve as a test for the market. Emma Nolan with Jayne Fergusson at the Logies

“I think it’s a crucial time in terms of streaming TV. We’re aiming at both people who might already have one service or more, but also there are people who are considering taking up a service. There’s a lot of talk about some of the new shows that are starting like Wolf Creek on Stan, and the second series of No Activity coming up later in the year. It was nominated for Logies. There is a lot of buzz about. If people haven’t signed up already, they’re considering which service to maybe try out,” Nolan said.

Thomas Woodgate, who regularly serves as the deputy editor of TV Week, was the editor of the On Demand special and expressed a level of exasperation over what shows to include in the magazine’s Top 100 list of streaming shows currently available.

And he’s got a point. The reason audiences are flocking to streaming services is that they offer strong libraries of choice beyond what they are used to from linear broadcast TV channels. Selecting just one hundred shows isn’t easy.

A highlight in the special edition, Woodgate advised, is an in-depth chat with Wolf Creek actress Lucy Fry, along with a visit to the set in the outback. Woodgate was also enthused by some opinion pieces that look back at the first episode of cult favourite shows, a list of hidden gems on streaming platforms, and a recollection of the moments that had TV viewers’ jaws hitting the ground.

Nolan believes that the special edition is coming out at the exact time that it is needed by many viewers. “We feel like it’s the right time. Everywhere I go people are asking me questions about which is the best service and how much does it cost. It was peaking, that kind of interest. I feel like we’ve hit the market at exactly the right time. There’s so much exciting content in it, from the basics of how to sign up to really in-depth previews and reviews on the best shows coming up.

“I’m proud because I see TV Week as the leading TV brand in the country and I’m proud that we’re the first in the market with something major like this.”

Despite the overlap in audience, Nolan doesn’t believe that TV Week On Demand will cannibalise the existing TV Week audience, but rather the one-off edition will be seen as a bonus that may also be picked up by new readers.

“It’s more of a ‘what’s coming up over the next few months’. There’s a bit of tech stuff in there in terms of how to sign up to these streaming services, a step-by-step guide about how to get it on your TV – something I found really helpful myself. My kids know how to use Netflix better than I do.

“The timing was great for us in terms of the type of shows kicking off soon like Wolf Creek, Orange Is The New Black and Bloodlines. It is an exciting time in terms of streaming TV. It worked out really well,” Nolan said.