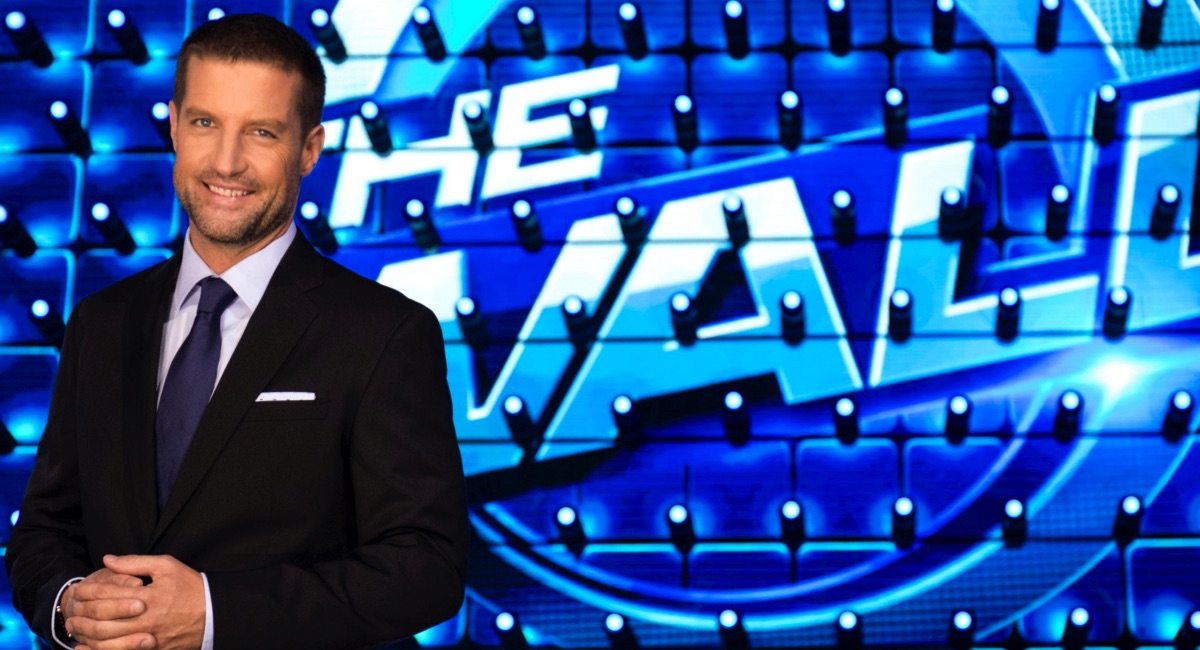 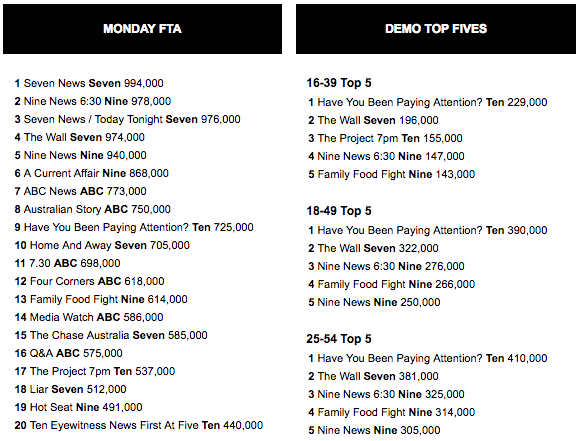 Seven enjoyed its second-biggest Monday since before The Block launched. The only other big Monday in those three months was Brownlow Medal Monday.

It was then time for what could be the last great TV series battle of 2017 with just five weeks of survey left. Seven’s The Wall was trying to find a game show audience in primetime with the carrot of the biggest prize money ever on offer $12m. Amongst its competitors last night was another game show in primetime – Celebrity Family Feud. At one stage on The Wall the contestants had a chance of winning over $2m. However, as the game progressed the amount dropped and they decided to take a safe option to walk away with $240,000. The show had a cracker of an opening night with 974,000 with all eyes now on how many will return for episode two tonight.

Next was the launch of Liar, the brilliant British thriller starring Joanne Froggatt and Ioan Gruffudd. The six episodes screened in the UK in September and October this year on ITV. The first episode managed an audience of just over half a million which seems about as good a result as you could hope for from an imported drama these days. 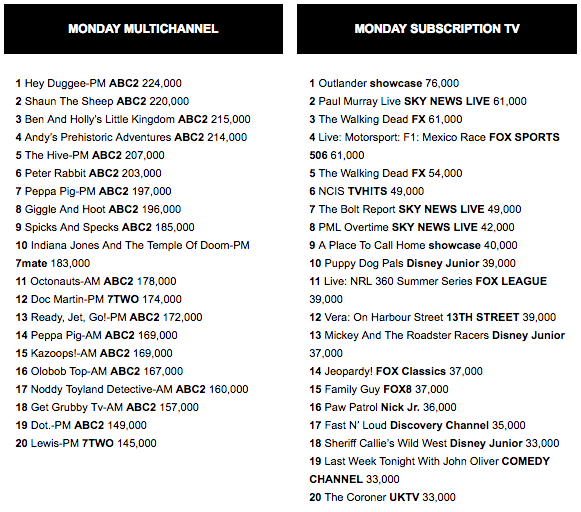 A Current Affair did its job at 7pm with Reid Butler working Saturday reporting on The Block auctions and the celebrity aftermath. Other stories last night included Tailgate Terror and Digital Detox. The Monday episode did 868,000 after a week 43 average of 733,000.

With Family Food Fight Nine was hoping it might successfully fill the 7.30pm slot with a new reality format to see it through the last few weeks of survey. The first episode, which started after a lengthy setting-the-scene explanatory intro, featured the families preparing a family food feast for the show’s judging panel – think MasterChef with families competing. One hour into the program and the families had plated up their meals. After chowing through six family feasts the judges awarded the first challenge to the Shahrouk sisters. The first episode had an encore screening on 9Life at 10.30pm. The ratings for episode one disappointed with just over 600,000.

Family Feud 6pm did 305,000 and then Celebrity Family Feud, featuring the families of Dave Hughes and Kate Langbroek which included the partners of both radio hosts. The program, which raised $40,000 for charity, did 439,000.

In between the game shows was The Project with Tony Martin one of the Monday guests. The 7pm half did 537,000 after an average of 545,000 last week.

Have You Been Paying Attention? saw Jane Kennedy on duty hosting with a panel featuring Wil Anderson, Kitty Flanagan and Susie Youssef. Guests included Sophie and Stu from The Bachelorette and singer Anthony Callea. The episode did 725,000 after 782,000 last week.

Australian Story featured an introduction from Stuart Littlemore and told the story of Elisha Rose who has lived with the shame and stigma of her father’s actions since she was 13 years old. In 1998, Lindsey Rose was sentenced to five consecutive life sentences, never to be released. The episode did 750,000 after 622,000 last week.

Four Corners featured a report on Germany’s new Nazis from the BBC’s Panorama. It did 618,000 after 779,000 tuned in last week for the controversial What’s Wrong With The NBN episode.

River Cottage Australia delivered 176,000 followed by The World’s Most Extraordinary People on 195,000.