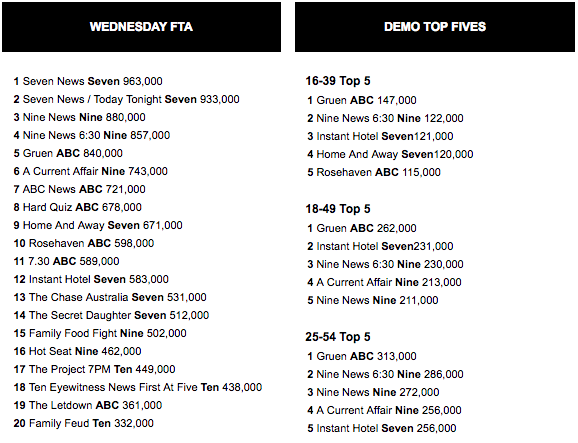 After audiences over 700,000 on Monday and Tuesday, Home and Away had a Wednesday audience of 671,000 and was again the channel’s biggest audience after Seven News.

Instant Hotel visited an amazing property in its second episode as the contestants headed to Mark and Janine‘s 50s-inspired property. Two teams scored the property seven out of 10, another gave it a six while the fourth gave it eight. After just under 700,000 on launch, episode two did 583,000. The episode won its slot 25-54.

Season two of The Secret Daughter launched with 512,000. The six-episode first season started on 899,000 and ended on 771,000. The tables have been turned somewhat this week with the hottest US drama well over 1m and the former #1 Aussie drama less than half that. Tracy Grimshaw was back at her A Current Affair desk last night. There were reports on Mark Latham, Salim Mehajer and after a report on super pharmacies recently, last night the program looked at super servos. The Wednesday episode did 743,000.

To avoid elimination on Family Food Fight, contestants had to cook one of Matt Moran‘s recipes. Episode seven did 502,000 after 509,000 a week ago.

Maria Angelico from Sisters was a guest on The Project with a midweek audience of 449,000.

Sisters then did 251,000 after 350,000 a week ago with last night’s audience half the size of The Secret Daughter crowd.

Madam Secretary then did 146,000 as the US Secretary of State headed to Libya.

Sunday, Wednesday and Saturday continue to be the strongest nights for the broadcaster’s primary channel.

One of the key properties keeping audiences engaged midweek has been Hard Quiz, which did 678,000 after 661,000 last week.

Gruen looked at Amazon and Streets ice cream among other things last night on its penultimate episode of season nine. The Pitch saw a New Zealand agency go down to the Aussies with competing ads about making university education free. The episode did 840,000 after 821,000 last week where it was behind only the medical dramas Doc Martin and Doctor Blake in the week 44 ratings. Last night the show was a clear #1 for viewers 25-54.

The second episode of Birth Of The Empire did 273,000, which will again make it one of the channel’s best for the week.

The first episode of the three-part The Mosque Next Door from Southern Pictures did 254,000.