• ABC’s Australian Story on Justine Damond Ruszczyk #1 after 7pm
• With share on 17.1%, ABC records biggest Monday survey audience
• Have You Been Paying Attention? & Instant Hotel best of the rest 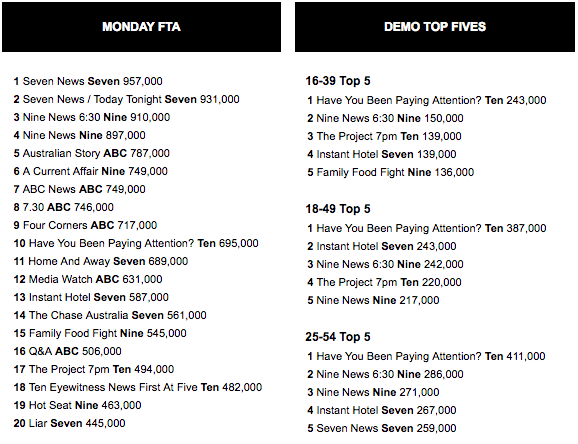 On Instant Hotel the competitors arrived in Mildura for a visit to a houseboat on the Murray River. The episode did 587,000 after 653,000 on Monday last week.

The final of Liar with the last two episodes delivered in another double dose. No spoilers here though because not everybody got to finish watching one of the best shows of the year last night. We can disclose the ratings though – 459,000 for episode one and then 381,000 for episode two. 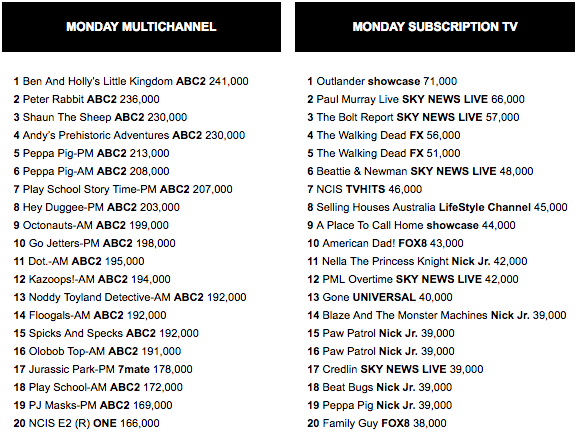 A hitman for hire, loyalty cards and property prices were featured on A Current Affair. The Monday start to the week did 749,000 after a week 46 average of 720,000.

Just three remaining teams on Family Food Fight with the Monday competition facing the food critics at the CWA who were judging lamingtons. The episode did 545,000 after 548,000 a week ago.

Trial night continued on the channel with two episodes of Chicago Justice.

The episode of All Star Family Feud featured The Bold versus The Beautiful with 337,000 watching.

Have You Been Paying Attention? was close to its lineup best with Mick Molloy, Jane Kennedy and Celia Pacquola joining Ed and Sam. Guest quizmasters included former senator Jacqui Lambie. The ratings reflected the talent as the program more than doubled the TEN audience after it started.

TechGuide founder and Mediaweek podcast contributor Stephen Fenech started off Monday’s episode of 7.30 as reporter Matt Peacock visited the tech guru at his Sydney home to hear about his solar system he recently installed. The episode won its timeslot with 746,000.

The death of Australian Justine Damond Ruszczyk, gunned down by a police officer in Minneapolis, featured on Australian Story with 787,000 watching as the show ranked #1 after 7pm.

The scandal surrounding Justice Lionel Murphy was examined on Four Corners with 717,000 watching.

Media Watch was on 631,000 with one of the items looking at Mark Latham‘s recent court battle.

Michael Mosley hosted the first episode of The Nine Months That Made You with 205,000 watching.