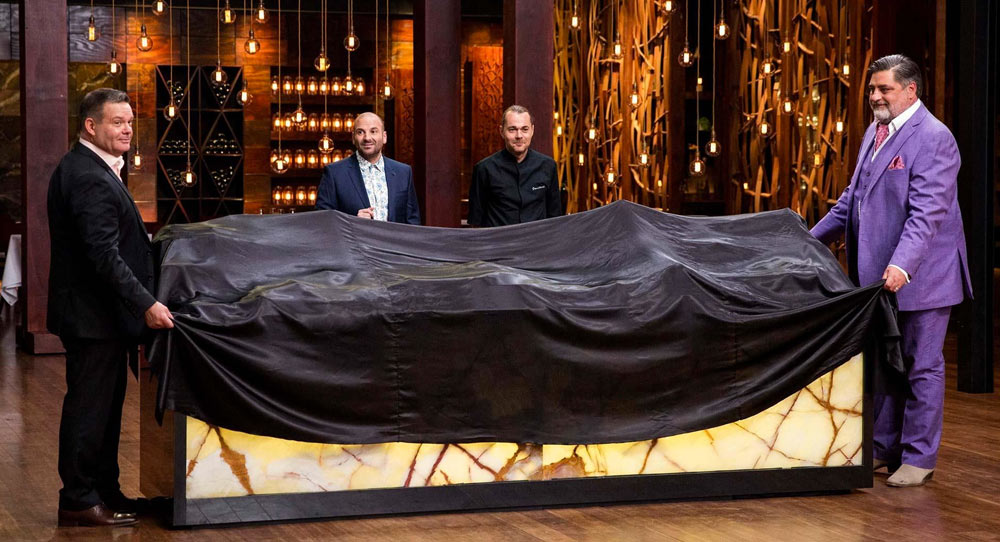 Both Today and Sunrise were on the banks of the Thames this morning. Today was near London Bridge with Sunrise a little further along the south bank beside the London Eye.

Nine’s Natalia Cooper was at the National Railway Museum in York, while Seven’s Edwina Bartholomew was pedalling around the London sights with various Seven UK correspondents.

Seven weather presenter Sam Mac was at Barangaroo where Mrs Koch was one of his guests. Meanwhile Kochie visited Abbey Road and Mark Beretta donned a top hat and tails to attend a Buckingham Palace Garden Party. The program also had a live interview with Meghan Markle’s sister.

On Today, Georgie was back and Karl visited UK breakfast TV host Piers Morgan, who also appeared on ACA last night. Allison Langdon was reporting from outside Windsor Castle. Karl and Georgie in London

The Tuesday numbers for the two commercial TV breakfast shows were: A Current Affair reporter Steve Marshall fronted a “pack rapist” 18 years later who wouldn’t say sorry to the camera. He certainly spent time talking with Marshall, instead of choosing to run from the camera as some do. Marshall reported he was trying to weasel out of his victim compensation payments. Laura Turner then had the latest on the royal wedding with Piers Morgan and Andrew Morton on Markle’s family. After 900,000+ on Monday, Tuesday’s ACA was on 824,000.

The first episode of East Well For Less hosted by Leila McKinnon was next. A debut audience of 614,000 tuned in for information on how and where to shop.

A promo for Shark Tank ended The Project with shark Janine Allis explaining how they decide on what to invest in. She said she was close to breaking even with some bad investments and some good. The episode was on 558,000 after 579,000 on Monday.

The first immunity pin of the season was up for grabs on MasterChef with 804,000 watching after 845,000 a week ago. The judges said it would be close and it was with Chloe just missing out on the pin. Tonight the show has a team challenge from the MCG with the Melbourne Football Club and the great Nathan Jones.

Shark Tank followed with a debut audience of 508,000 for the new season. There was plenty of dealing going on with two out of the four entrepreneurs securing deals with the Sharks for their food and controversial gifting businesses. Jake McKeon from Victoria entered the Tank seeking $300,000 for a 10% share of his eco-friendly coconut bowl business, Coconut Bowls. He had Janine Allis & Andrew Banks and Naomi Simson & Dr Glen Richards partnering for an investment. After much consideration, Jake accepted Janine and Andrew’s combined counter offer of $300,000 for a 18% share.

Queensland hipsters and best mates Christen McGarry and Matt Hepburn entered the Tank next, seeking $750,000 for 25% of their brewery business, Your Mates Brewing Co. Janine, Naomi and Andrew were not enthusiastic about the product and declined an investment. Steve Baxter challenged the boys with an offer of $750,000 for 60%. Not willing to accept the figure, the boys left the Tank without a deal.

With the ABC screening Stargazing Live over three nights next week, Brian Cox is everywhere. He even popped on Nine’s Today Extra this morning. Last night the 2017 doco Brian Cox: The 21st Century Race For Space did 394,000. Cox will then be Julia Zemiro’s guest on Home Delivery tonight.

A Stargazer’s Guide To The Cosmos followed with astronomer Greg Quicke giving viewers a guided tour of the southern sky. The program did 285,000.

Justine Clarke was the guest on Who Do You Think You Are? with 360,000 watching her learn about her family background. Her parents separated before her first birthday.

Insight did 262,000 with an episode about making the choice to have surgery.