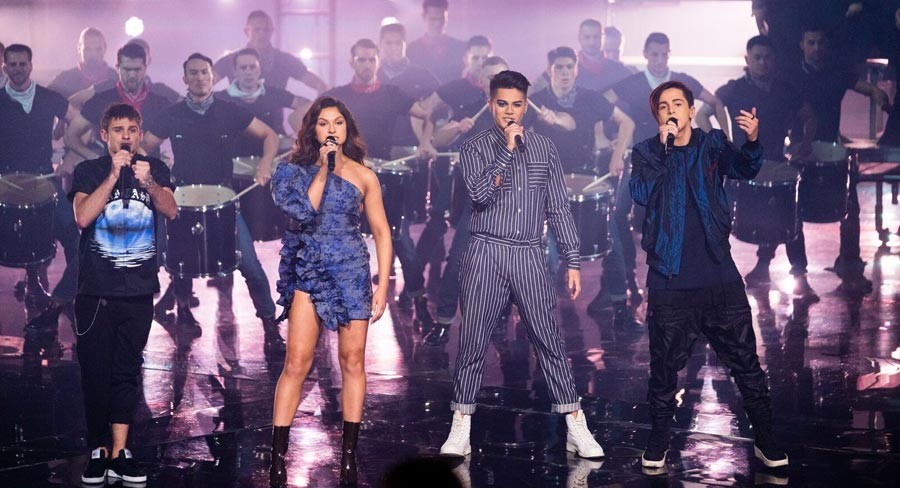 The House Rules judges were in Perth looking at the work done transforming Chiara and David’s crammed brick house into a glam-luxe home. NSW team Toad and Mandy nailed their bathroom design with the “perfect shade of red” and received LLB’s first perfect 10! They subsequently ranked #1 on the leader board. After 795,000 a week ago, the audience last night was 910,000. The program out-rated the final of The Voice in Brisbane, Adelaide and Perth. It was the biggest House Rules audience so far this season.

Sunday Night featured Matt Doran with the doctor set to perform the world’s first human head transplant and then Angela Cox was with The Beach Boys. After 619,000 a week ago, the program did 614,000 last night.

The network has launched into a string of Super Sundays that could be hard to beat. From The Voice, Nine then goes into Sunday nights featuring State Of Origin, the TV Week Logies, Australian Ninja Warrior and then The Block. That should take care of the Sunday night schedule until deep into October.

It was spectacular opening to the season final of The Voice with Sam Perry and Kelly Rowland performing early-on a version of Michael Jackson’s They Don’t Care About Us. The episode featured many musical highs as the contestants were given some big tunes to tackle – one of them was Bella as she tried to take on Whitney Houston’s The Greatest Love Of All. The first of the final to be eliminated, which didn’t happen until 9.15pm, was Aiden from Team Joe. He was closely followed by Sheldon from Team George. “You are all winners,” said host Sonia Kruger as they left the stage. The remaining two – Bella and Sam – were both part of Team Kelly. Delta Goodrem took the opportunity to hand over the crown to the new queen of the coaching team. Just moments later Sam was given the title for 2018. The program managed to end about five minutes early. That means no inflated 60 Minutes overnight number this morning. The Voice managed to rank #1 all people, but the numbers were down from just over 1.3m for both parts of the final in 2017 to just under 1m this year.

60 Minutes then did 524,000 with a mix of stories including international tension in the Pacific in a story reported on by Tom Steinfort.

The Sunday Project featured some great Hollywood stars – Richard Dreyfuss and Kathleen Turner, who were in Australia for the Supanova fan convention. The episode did 450,000.

MasterChef returned to the MasterChef kitchen after the week in South Australia. The Sunday episode sorted out who would be competing for immunity this week and also who would be fighting to stay in the competition. The challenges started with a dish that incorporated a loaf of bread, followed by a challenge to make spaghetti bolognese with a secret ingredient. After 622,000 a week ago, last night was on a much stronger 813,000.

A log cabin build was the construction featured on Grand Designs New Zealand with 506,000 watching at 7.40pm.

Episode four of Mystery Road then did 604,000. There must be many viewers who have fast-tracked the series via iview. If you are going week-by-week, stick by it. The final episode tops off what has been a great series and your loyalty will be more than rewarded with an incredible final episode.

Back to reality for the channel after 2.1m watching the France v Australia World Cup clash on Saturday.