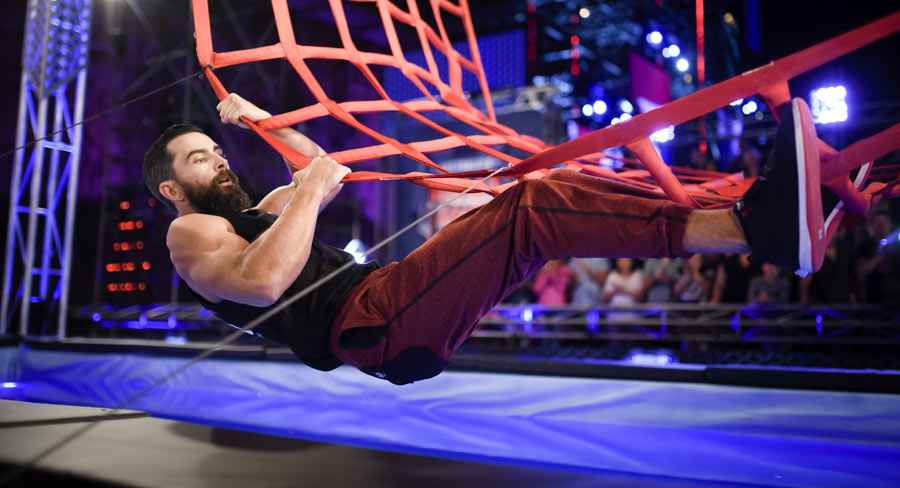 • Ninja enough for Nine to win, but launch drops from 1.67m to 929,000
• No records either for House Rules and MasterChef as seasons’ climax The House Rules judges had their first look at the work across the past week. Josh and Brandon topped the leaderboard with 25 out of 30 with three cheers from the judges for their pub at Toad and Mandy’s. Despite Kim and Michelle’s “astonishing design” in the waterpark at Chiara and David’s, the rest of their zone was pretty much a fail and they sank to the bottom with 16 out of 30. The Sunday episode was on 835,000 after 918,000 last week. Seems Ninja took away more viewers than the Logies.

Sunday Night followed with a profile of Elaine French, who has been robbed twice by African gangs in Melbourne. The episode did 555,000 after audiences of 574,000 and 474,000 in the past fortnight. The Quintuple Steps were the first obstacles on the second season of Australian Ninja Warrior. Hosts Rebecca Maddern and Ben Fordham with Freddie Flintoff amid the action were back for the new episodes. Adventure junkie Steve Choate was the first contestant. The show had gone to considerable trouble building his backstory and brought all his family to Ninja Island, but he still lucked out on the first section of the course. And so it will go for the next few weeks, pumping up the contestants only to watch most of them fall short at one of the various obstacles. The first show back did what can only be a disappointing 929,000 after it set the bar so high last year.

On 60 Minutes Liam Bartlett met Dhakota Williams, the daughter of Australia’s most notorious gangster, Carl Williams. The episode did 618,000, which put it ahead of the competition.

An episode of Tough Nuts (aka Australian Crime Stories) followed where the guest crook had been busy – murderer, drug dealer, kidnapper, extortionist and street hoon, Dino Dibra. He grew up in Sunshine, a Melbourne working class suburb, where he became friends with a group of boys who would all go on to leave their marks in Melbourne’s underworld. The episode did 295,000, which sees it well inside the top 20.

Earlier in the night The Sunday Project was on 421,000 after 7pm with Daniel Sutton reporting from the Thailand cave rescue.

There were some confronting images at the start of a repeat episode of NCIS, which did 298,000 after MasterChef. A Nelson home painted black – inside and out – was featured on Grand Designs New Zealand, which did 527,000 after the news.

The first episode of the second season of Jack Irish followed with 723,000 watching Guy Pearce, Marta Dusseldorp and a great cast embark on their latest mystery. Ian Collie, Andrew Knight and Matt Cameron were producers of this season. The audience was just short of the 786,000 who tuned in for episode one of Mystery Road.

Evolutionary theory and destructive creation were on offer on an episode of First Civilisation looking at Ancient Mesoamerica with 183,000 watching.

The second leg of the Tour de France followed with 195,000 after 197,000 watched the opening stage on Saturday.