Seven and Nine pressed “Go” on their Q1 major reality formats last night after TEN’s I’m A Celebrity got off to a good start on Sunday.

Seven dominated the night with a winning primary channel and network share.

While My Kitchen Rules continues the tradition of dominating ratings, two of the major formats were down year-on-year while the third managed to improve on its season launch from 12 months ago. 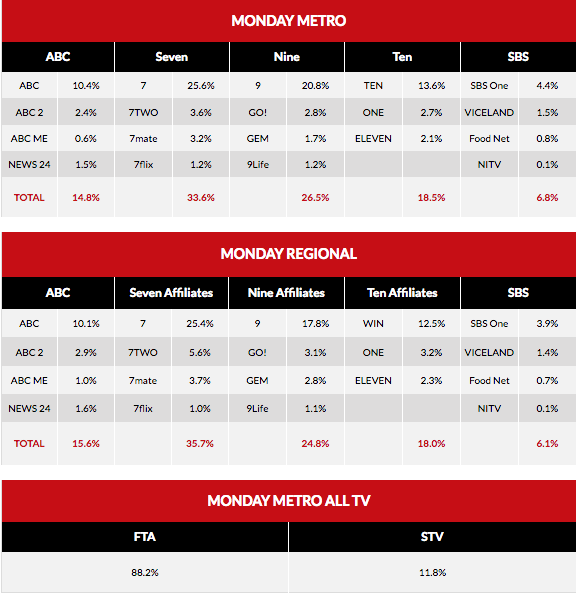 Home and Away returned at 7pm and there was plenty of drama with Ziggy and Brody getting steamy while missing Maggie was washed ashore. The series has returned with an audience of 796,000, which is at the upper end of what it has been doing at the end of 2017.

My Kitchen Rules season nine “real people, real food” is under way and Seven didn’t waste any time promoting the forthcoming upheaval when two contestants are sent home. Sydney brothers Josh and Nic kicked off the competition with an Italian menu where the dessert was the most successful dish for both judges. There are some intriguing contestants in this first group, in particular Jess and Emma. The first episode of the new season ranked #1 for the night on 1.18m. Yet that was down on the 1.30m watching the 2017 season launch.

Seven dangled another new episode of The Good Doctor in front of audiences before survey starts – how times have changed! The audience turned out again with 1.09m watching, which continues its good numbers from the end of 2017.

Tracy Grimshaw returned to A Current Affair after a summer break. The show had some of its A team working including Martin King and Grimshaw conducted a studio interview. The show also carried a shortish plug for Married At First Sight. The first ep of the week did 900,000 to win the slot.

Married At First Sight was in the preliminary rounds with will she or won’t she expectations about one of the contestants and when she would reveal she had a daughter. The series launched with 912,000, up year-on-year from 826,000. Later during its first week last year the series managed a peak average audience of 934,000 for the Tuesday episode.

Also returning on Nine was Travel Guides with the Fren family visiting Italy, which had an opening night audience of 614,000.

After the excitement around the arrival of Lisa Wilkinson last night, The Project started the work-day week with the regular team led by Carrie and Waleed with Pete and Steve Price. Highlights included Carrie Bickmore with Bernard Tomic prior his departure to South Africa and then two segments with Dave Grohl and Taylor Hawkins from Foo Fighters in the Melbourne studio one day prior to their Melbourne show tonight. The Project started on 433,000 against the Seven and Nine News, while after 7pm the crowd increased to 708,000.

It was billed as Mundine Monday – the arrival of Anthony Mundine in the camp on I’m A Celebrity…Get Me Out Of Here. However, most of the interest was around Bernard Tomic and how he buckled after a challenge, threatening to quit already. The second ep did 858,000, which is down year-on-year from 959,000.

The season final of Back Roads with Heather Ewart saw her visiting Violet Town in Victoria with 677,000 watching.

A repeat of David Stratton‘s Stories Of Australian Cinema had him recalling giving The Castle one and a half stars. “If I saw The Castle today I would probably give it four stars,” he admitted. The episode did 376,000.

The broadcaster is getting good mileage our of River Cottage Australia at 7.30pm with 169,000.