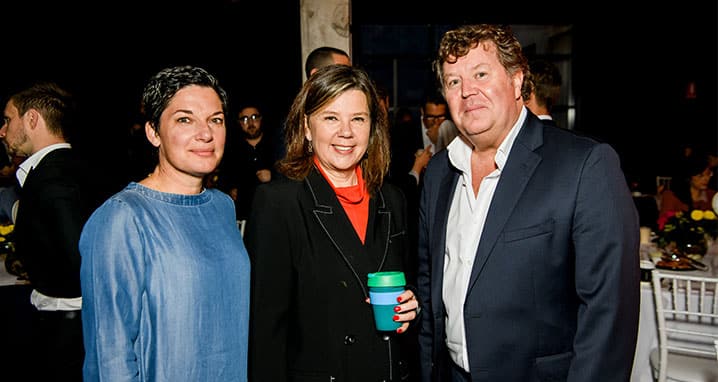 “SCA’s audio business grew during the year, outpacing the market.”

The following table shows comparisons to the prior year: 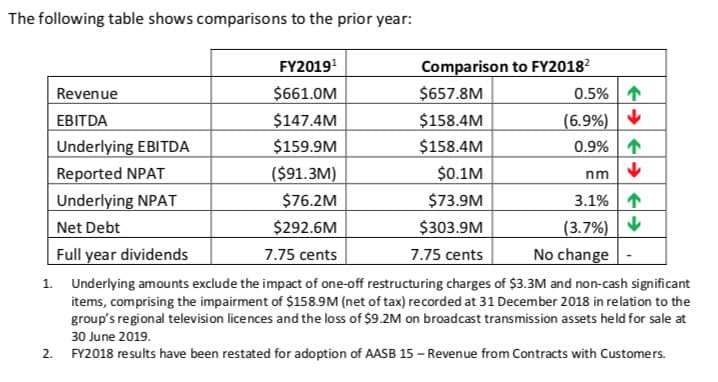 Highlights of the results include:

• Underlying NPAT grew by 3.1% to $76.2M and underlying EBITDA grew by 0.9% to $159.9M.
• Group revenue was up by 0.5% to $661.0M, while underlying expenses were flat at $501M.
• Revenue in the audio segment (comprising metropolitan and regional radio and podcasting) was 2.4% higher at $453.4M. This was driven by 9.2% growth in national revenue, which benefited from the federal election and the Boomtown regional trade marketing campaign. Local advertising slowed in both metro and regional markets, influenced by federal and state elections, the financial services royal commission and the contraction in housing and automotive markets. Underlying EBITDA of $152.7M was 3.4% up on the prior year.
• Underlying EBITDA in the television segment improved by 1.2% to $33.7M supported by cost discipline with underlying expenses down by 4.0%. Television revenue declined by 3.2% to $206.5M. Revenue in the three aggregated markets of Victoria, southern NSW and Queensland was back overall by 5.3%.

Southern Cross Austereo CEO Grant Blackley said: “SCA’s audio business grew during the year, outpacing the market. In metro markets, SCA’s audio revenue increased by 4.1%, while the broader radio market declined by 0.5%. SCA’s regional radio revenue grew by 1.5%, boosted by the Boomtown initiative. In both cases, these results were driven by strong growth in national revenues, which were up by 9.2% on the prior year.

“In metro markets, our Hit and Triple M brands performed consistently in FM and digital radio audience surveys. The decision to aggregate our FM and digital radio reach offers advertisers a unique, simple and scaled value proposition and has reaped rewards. When brands choose to advertise on Hit or Triple M, their advertisements are broadcast in the same day-part on five radio stations in the same location, significantly extending their commercial impact.

“PodcastOne Australia has consolidated its position as the leading premium commercial podcast business in Australia. Now home to 65 original Australian podcast titles, as well as the best podcasts from our US partner, PodcastOne Australia has attracted a premium group of corporate sponsors and is expected to reach cashflow breakeven in the second half of the new financial year.

“SCA’s national revenue in regional radio and television markets grew by 4.1% compared to the prior year. This growth has been driven by targeted initiatives taken by SCA over several years to change the perception among metropolitan media buyers of the value of regional Australia and to increase advertising investment in regional media. In 2019, SCA joined with other regional media companies in the Boomtown joint marketing campaign to accelerate these initiatives.

“SCA will continue to invest sensibly in ‘front-of-house’ activities: creating compelling content and using our audio assets to help our advertising partners succeed. This will include optimising the value of our current radio and podcasting brands, as well as developing new audio products that meet the increasing consumer demand for mobile, personalised, on-demand audio content.

“This will be complemented by a focus on operational excellence in our ‘back of house’ functions, including implementing the recently announced outsourcing of SCA’s television playout and broadcast transmission functions.”