Sky News has confirmed its programming lineup for 2020:

From 5 am weekdays, Laura Jayes and Peter Stefanovic host breakfast show First Edition with the latest in news, politics, business and sport.

Then at 9am political reporters Tom Connell and Annelise Nielsen are live from Canberra each weekday to cover all the day’s political news on AM Agenda.

Chris Kenny anchors The Kenny Report weekdays at 5pm, examining the issues that dominated the news agenda throughout the day.

On February 7 at 8 pm, Rowan Dean, Rita Panahi and James Morrow launch their new program, Outsiders’ Guide. Watch on TV, or listen to the podcast, as the Outsiders dig deeper into individual issues in their unique style.

The Outsiders are back Sundays at 9 am with their no-holds-barred observations on the big issues of the week.

From February 2, join Kieran Gilbert for Sunday Agendaat 8 am. With the sharpest political minds in Australia featured on the program, including Sky News political editor Andrew Clennell, viewers will be given a jump-start on the fast-moving news cycle and the big issues coming up in politics for the week ahead.

At 8 pm, the premiere of a new Sky News debate program In My View. Each week, four opinionated commentators come together to discuss and dissect the hot topics they feel passionately about.

• First Edition with Laura Jayes and Peter Stefanovic (Weekdays at 5am)
• AM Agenda with Annelise Nielsen and Tom Connell (Weekdays at 9am)
• NewsDay with Tom Connell (Monday and Friday) and Ashleigh Gillon (Tuesday – Thursday at 12pm)
• Afternoon Agenda with Kieran Gilbert (Monday – Thursday at 2pm)
• The Friday Show with Rita Panahi (Fridays at 2pm)
• The Kenny Report with Chris Kenny (Weekdays at 5pm)
• Credlin with Peta Credlin (Weeknights at 6pm)
• The Bolt Report with Andrew Bolt (Weeknights at 7pm)
• Kenny on Media with Chris Kenny (Mondays at 8pm)
• Jones & Credlin with Alan Jones and Peta Credlin (Tuesdays at 8pm)
• Richo & Jones with Graham Richardson and Alan Jones (Wednesdays at 8pm)
• Chris Smith Tonight with Chris Smith (Thursdays at 8pm)
• Outsiders’ Guide with Rowan Dean, James Morrow and Rita Panahi (Fridays at 8pm)
• Hardgrave with Gary Hardgrave (Fridays at 8:30pm)
• Weekend Edition with Jaynie Seal and Tim Gilbert (Saturdays & Sundays at 6am)
• Sunday Agenda with Kieran Gilbert and Andrew Clennell (Sundays at 8am)
• Outsiders with Rowan Dean, Rita Panahi and James Morrow (Sundays at 9am)
• Business Weekend with Ticky Fullerton and Leo Shanahan (Sundays at 11am)
• Sharri with Sharri Markson (Sundays at 6pm)
• In My View (Sundays at 8pm)
• Paul Murray Live with Paul Murray (Sunday-Thursday at 9pm)
• Chris Smith & Friends with Chris Smith (Sundays at 10pm)
• The Front Page with Peter Gleeson Monday- Thursday, Jane Marwick Friday and Saturday and Gemma Tognini Sunday (Nightly at 11pm) 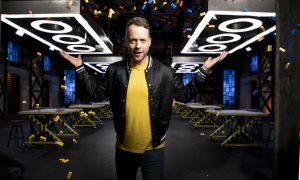 Lego Masters to return on April 19 on Nine and 9Now