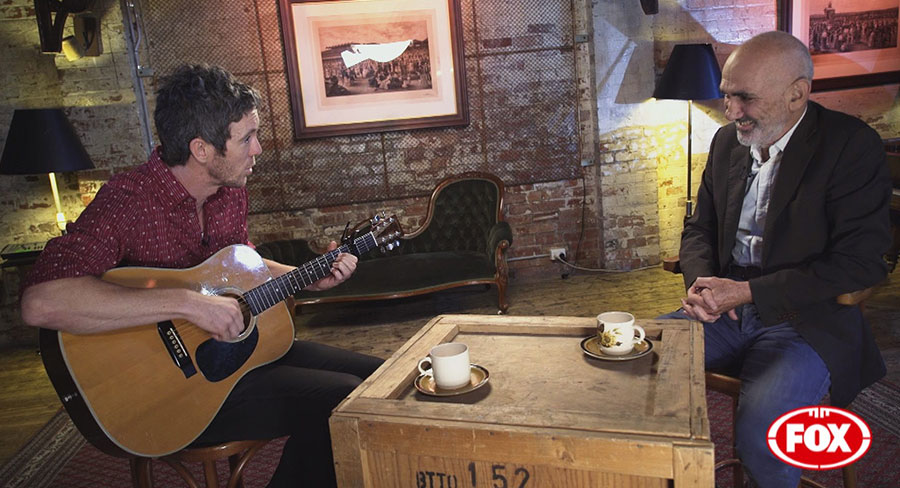 The first episode features Australian music legend Paul Kelly and the program draws parallels between AFL and music, with the host delving deeper in to Kelly’s relationship with both.

The director and producer of Bob is Mike Hirchfield. During the Paul Kelly episode, the singer talks to Murphy about his relationship with footy and how he was originally a Melbourne supporter, but switched to the Adelaide Crows when they entered the competition. Kelly had his fare share of friends mocking him for switching teams.

He wanted to play footy as a youngster, with an eye on being a rover.

Kelly said sport has a role to play in shaping social issues, much like music does.

Murphy asks him about watching football in black and white versus the experience of watching the modern game.

Kelly says he is part of a “secret football society” and describes the other musicians involved as being part of “motley crew”.

He enjoys watching the Crows play, but Kelly admits to anxiety and he sometimes has to leave the room.

There is also much discussion about Kelly’s music in the season two start of Bob, with how music is not so much about blood, sweat and tears, with Kelly insisting he needs to invest time playing and “doodling”.

He recommends people study what they love. Kelly gets his biggest buzz from music and he talks about the way he writes music and lyrics and how he gets inspired by other songs.

A bad day as a performer can be like a football player having a bad game.

In the Sam Kerr episode, the Matilda’s captain discusses having natural ability versus working hard to improve your game.

In a discussion about motivation, Kerr says after being injured following the 2011 World Cup, for the first time she felt the drive to play.

“I needed an injury like that – I needed a kick up the butt.”

She also speaks to Murphy about sacrifices for the sport.

She speaks about a bad period for the family when she didn’t talk to her brother, superstar West Coast Eagle Daniel Kerr, for two years. Daniel has told her that’s what helped bring him back down to earth.

She also talks about Australia’s Women’s World Cup ambitions and how the team has never gone further than the quarter-finals in the past.

New episodes of Bob screen Tuesday nights. Episodes are then screened across the week on Fox Footy and are also available on via Foxtel On Demand.