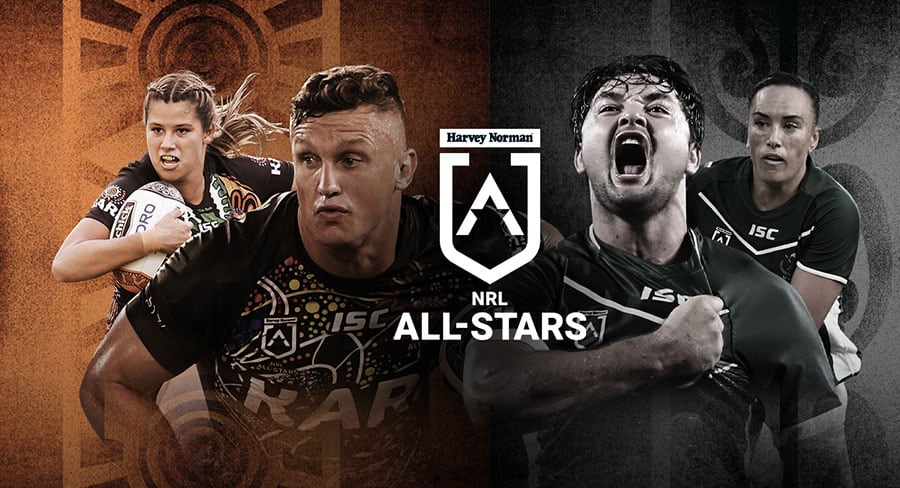 The 2021 NRL season begins to kick into gear this Saturday night from 5:30 pm 9Gem and Fox League in a huge double-header showcasing some of the top male and female Indigenous and Maori stars of the game, as they represent their culture in the NRL All Stars game.

Both fierce matchups will give fans their first taste of rugby league for the year ahead of the 2021 NRL season kicking off on March 11th on Nine.

The women’s Maori side will be searching for some retribution following a narrow 10-4 loss to the Indigenous side in last year’s contest. Both sides are filled with NRLW stars, with the superstars like Corban McGregor, Zehara Temara lining up for the Maori All-Stars, and Quincy Dodd and Tallisha Harden for the Indigenous team, hoping to deliver their side another victory.

The men’s game will kick off at 8:10 pm and be preceded by a pre-game show on both 9Gem and Fox League.

The Indigenous outfit again features Latrell Mitchell at fullback, and his in-form Rabbitohs teammate Cody Walker debuts in the halves after missing out due to injury in 2020. Jack Wighton and Jesse Ramien make for a formidable centre combination, and the heralded David Fifita will power the forwards on.

For the Maori All-Stars, Charnze Nicoll-Klokstad brings his unstoppable energy to the fullback position, while Roosters flyer Joseph Manu makes his debut for the side. Panthers standout Jarome Luai slots into five-eighth, though many eyes will be on his halves partner, with veteran star Benji Marshall getting the call-up to again lead the side to victory.