Regarded as one of the most prestigious days of spring racing, Derby Day is must-see event television. Packed with four Group 1 races, it promises thoroughbred racing at its very best.

Network 10’s coverage will be underpinned by a new broadcast centre at Flemington Racecourse, which will capture all the action from the track. 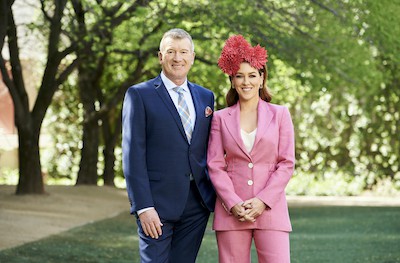 International racing expert Francesca Cumani will join in the action from the UK for her insights and analysis, plus 10 Sport presenters Roz Kelly and Kate Peck will join in as the broadcast reaches all parts of the country.

A star-studded line-up of Australian music stars will take to the stage throughout the 2020 Melbourne Cup Carnival, with the Victoria Racing Club announcing an impressive field of local chart-toppers for 10, with extended performances available on 10 Play.

The performances, pre-recorded in iconic locations across Australia in the lead up to Cup Week, kick-off on AAMI Victoria Derby Day with former Australian Crawl frontman and rock royalty James Reyne.

The singer-songwriter has just released his 12th solo studio album, but it will be his 80s cult classic, Motor’s Too Fast, that he will perform.

Prior to the running of the 2020 Lexus Melbourne Cup, Pete Murray will lead a celebratory moment marking the 160-year-old journey of our greatest race performing his original song, Found My Place, from Byron Bay.

Also performing at the Melbourne Cup is The Masked Singer Australia winner and Neighbours star, Bonnie Anderson, will then have the honour of singing the Australian National Anthem live from Flemington Racecourse. Jon Stevens and his band, including an eight-piece string section, will also feature from Flemington Racecourse, belting out the anthemic Never Tear Us Apart by INXS.

The Melbourne Cup Carnival’s final day is Seppelt Wines Stakes Day with Sydney-born, LA raised singer Sam Fischer who will be performing his smash hit track with over 250 million worldwide streams, This City, from Los Angeles.

Closing out the entertainment line-up for the Melbourne Cup, Bonnie Anderson will return to perform on the final day of racing.