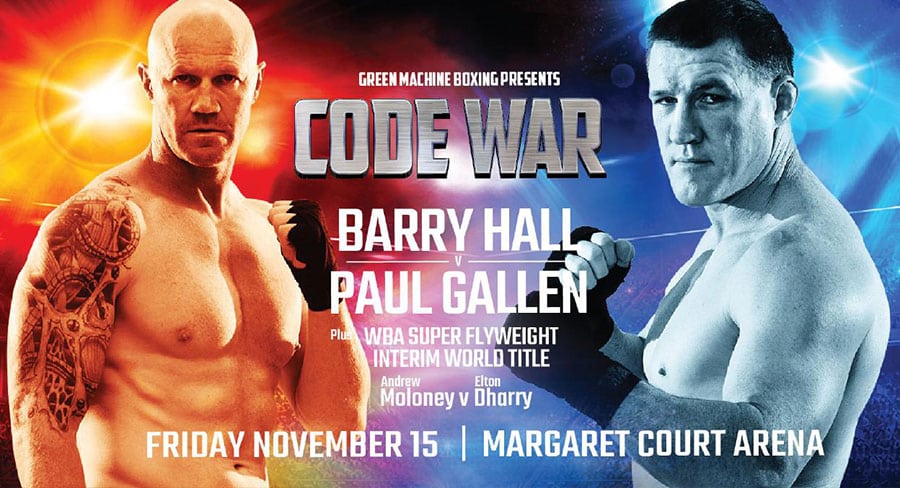 • Code War will be staged at Margaret Court Arena

AFL hardman and Premiership Captain, Barry Hall, make his boxing debut when he steps into the ring against one of the NRL’s toughest, former State of Origin, Cronulla Sharks captain Paul Gallen.

Code War will be staged at Margaret Court Arena on Friday, November 15 and broadcast on Foxtel’s MAIN EVENT. The card kicks off at 6.25pm on Friday, with Main Event coverage to begin at 7pm for the second bout of the night.

Paul Gallen – “I’m really looking forward to this challenge against an AFL legend. When I first started boxing I was warned by some Australian boxing royalty to stay clear of Barry and also some mutual people we know who he’d played AFL with.  When his name was mentioned over the past couple of years I saw it as a challenge and said yes with it never eventuating. I guess now we’ll get to see how good a judge those who backed him are.”

Barry Hall – “While living in Sydney and Queensland for 10 years, a common comment I heard from NRL fans is that AFL was ‘soft’… well now I guess we’re all about to find out!”

The number one fight on the card will feature Andrew Moloney taking on New York based Guyanan Elton Dharry for the WBA Super Flyweight Interim World Title. Andrew’s identical twin brother and World #3 will also fight when he takes on World #10, Nicaraguan Dixon Flores in a Bantamweight showdown.