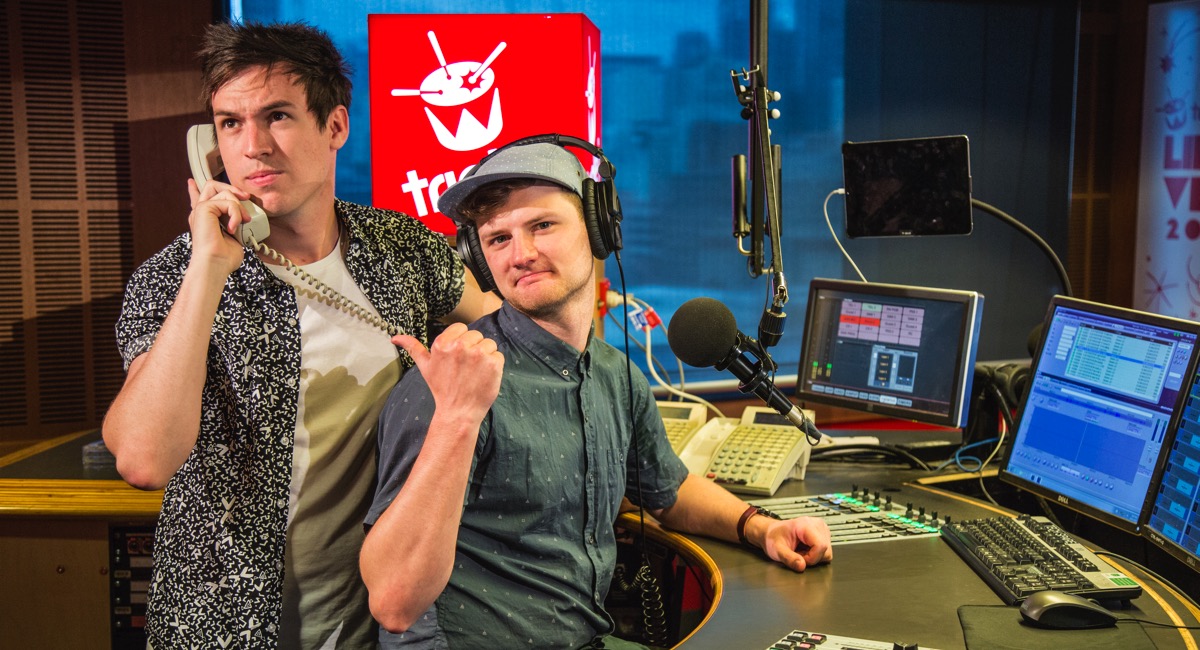 In 2016, public broadcaster triple j announced that two lads from Adelaide would front its breakfast show in 2017. For Ben Harvey and Liam Stapleton, it was a jump from the local radio scene to a national primetime radio shift – a dream career boost for anyone in the industry.

“We really hit things hard in Adelaide,” Harvey told Mediaweek. “We were our own producer, videographer, production assistant, you name it. Our hard work eventually got noticed and we were on our way. Hard work, focus and a big ol’ chunk of luck are really the key to success in any field.”

Their first on-air shift was on 9 January 2017 – well before any of their competitors on commercial radio returned from their breaks.

Now several weeks later, Stapleton is still trying to figure out if he has the new-job jitters or not.

“I’m not eating much at the moment and I’m still trying to work out if that’s due to intense jitters or the fact that I’m in a new city away from home,” he said. “I struggle to make toast let alone a nutritious wholesome meal.”

It’s a bit of a different story for his on-air partner though. Harvey admitted to being nervous at the beginning, but said it’s subsided. He said: “That’s what makes it fun and feel like a first show. They’ve settled now though.”

The duo are no strangers to radio. Before this, Stapleton and Harvey were presenters on community radio station Fresh 92.7 in Adelaide. Along with this, they have also been active in the local comedy circuit for some time.

“We’ve always done very Adelaide-focused content, but now we are national so we’re broadening our content to appeal to a wider audience around Australia, which is super fun,” Harvey said.

Stapleton added: “Our show is becoming much more topical and malleable. We’re also running pieces a little longer at triple j because the average time spent listening is a lot longer when you’re speaking to a nation.”

Comedy was a key part of Stapleton and Harvey’s show in Adelaide. Asked if that is something they will be consciously bringing in on the new show, Stapleton explained: “We haven’t necessarily tried to be ‘the funny guys’ yet but I’m sure when we find our feet we’ll find it easier to weave the laughs into the show.”

A lot of the assumption about them attempting to make the show funny comes from their background, Harvey explained.

“While Liam and I do have comedy backgrounds, we never sat down and said we want to do a radio show that’s all about comedy,” he said.

“We both just really enjoy making fun radio that makes each other laugh, so we’ll keep doing that.” Triple j is known for championing local artists and the local music scene. This has required them to know more about what’s happening in the local music industry. Stapleton said: “We did in some ways but you find yourself becoming engrossed in the culture very quickly. It’s easy to learn about up and coming independent Australian musicians when you’re a part of a radio station that champions it daily.”

Harvey added: “Fresh 92.7 was super supportive of local music in the same way triple j is, so for us it’s been an easy transition.”

Along with Harvey and Stapleton, the show’s news presenter Brooke Boney plays an integral role. She has been included in all triple j marketing content for the new show.

“Brooke’s an amazing journalist and presenter – we’re so lucky to have her in the team,” Stapleton and Harvey said in unison. “She’s all around the news of the world. As soon as a story breaks she’s there to inform us and everyone else listening. She’s also great for a laugh and almost always has a tale to tell about whatever we’re talking about on air.”

Australian Paralympian of the Year Dylan Alcott and comedian Gen Fricker also join the core team on a weekly basis.

“Dylan’s our resident athlete and sports correspondent. The guy knows everyone plus he’s a funny man in his own right,” the presenters explained. “Gen’s there for added comic relief and to cover off things in the world with lighter spin. It’s great to be surrounded by such talented people. It hides the fact that we have none.”

The pre- and post-production of triple j breakfast

The time before the on-air sign outside the studio lights up is spent researching, interviewing talents and brainstorming ideas.

However, the post-production ritual isn’t as sorted yet. Stapleton said: “To be perfectly honest we’re still trying to work out where the toilets are so it’s early days yet.

“Essentially we record a promo and a podcast intro straight after the show, then do research for interviews, brainstorm content ideas and make sure we’re up to speed on current music news and pop culture. We also get involved with any big triple j campaigns like the Hottest 100 or Unearthed competitions.”

The listeners’ feedbacks about the show have been mixed so far. Stapleton acknowledged that it is tough being the new kids on the block. “We always expected our first few weeks to be tough,” he said. “I feel like breakfast radio is a bit like Doctor Who – you always hate the new guy until they earn their stripes.”

Harvey wasn’t too concerned either, saying: “You get the odd mean one every now and then but we both have thick skin.”