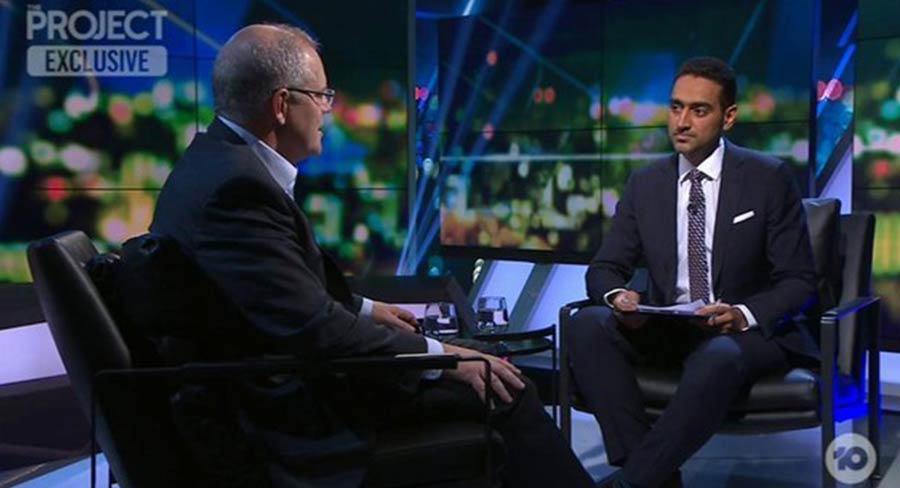 • Aly initially allowed the PM to freely take the microphone for a two-minute spiel.

Despite both having tickets to the AFL on Thursday night, Scott Morrison and Waleed Aly made time for a pre-match verbal stoush, reports 10 Daily’s Antoinette Lattouf.

In an uncommon journalistic move, Aly initially allowed the PM to freely take the microphone for a two-minute spiel.

The Gold-Logie winner then cut to the chase with what he felt was the heart of the debate.

“Does Australia have a problem with Islamophobia?” he asked.

“I don’t know if Australia understands Islam very well, and that can often lead to fear of things you don’t understand. That doesn’t always translate into extremism,” Morrison replied.

Aly then asked if Scott Morrison’s Coalition government had a problem with Islamophobia.

“No I don’t believe the Liberal party does… I can’t speak for the National party,” he said.

“Our party is made up of a lot of individuals and in our party, individuals have a lot more freedom to say what they think than a lot of other parties. And it is not for the party to answer for every single member on every single occasion.

“The best way for me to address any problem is to lead by my own example.”

[Read the original and watch the 35-minute interview]