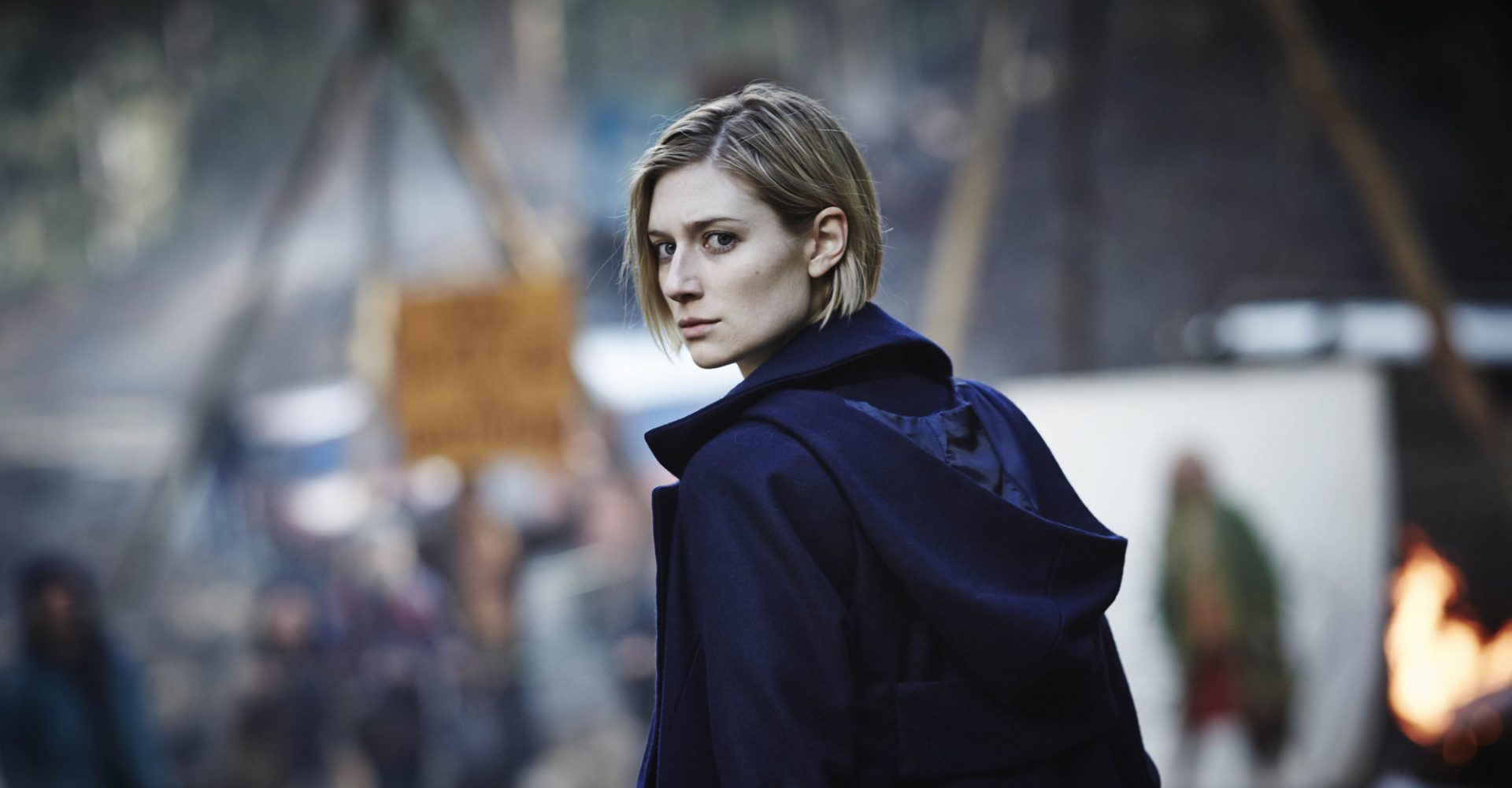 Foxtel’s new mystery series The Kettering Incident makes the most out of its mysterious Tasmanian setting, embracing its dark, foreboding landscape.

New Foxtel series The Kettering Incident has an ace up its sleeve – Tasmania.

The mood of the series is dark, wet, and foreboding, which makes its Tasmanian setting perfect for the unsettling tone of the show. As the show opens, we are introduced to a doctor in the UK who has been experiencing blackouts and returns home to Tasmania during one of these blackouts. Her condition, it appears, is related to a [possibly supernatural] incident from her youth that also saw the disappearance of her friend. Coinciding with her return home, more children have disappeared.

Shot on location in Tasmania, the show makes great use of the landscape and the foreboding mood it engenders.

It’s a region that is rarely captured on film, let alone in a TV show. In a three-day visit to Australia’s southern-most state, Mediaweek met with the cast and producers of the show who all acknowledged the power that the location offered.

For series creator Vicki Madden, who returned home there herself after establishing a career in the UK working on series such as The Bill and Trial and Retribution, setting the series in Tasmania was important for the story and for her personally.

“I wanted to tell a story about complicated characters in an isolated world. My mother was a single mother and we had a very tough life when we were younger. Part of it is the survival down here, survival of the isolation, which a lot of Tasmanians feel. It’s got a very European feel to it, which I’m really happy with,” she said. The show, which is visually like no other show filmed before in Australia, has been well-received by local critics who have seen it, as well as with overseas audiences at screenings in the UK and Denmark.

It was Madden’s passion for Scandi-noir series like The Killing and The Bridge that fuelled her desire to tell this story: “I really wanted to come back here and make a show that wasn’t Australian, as such. But was in line with my Tasmania, where I grew up in a gothic landscape. An isolated, cold, remote place.”

“I started with The Killing. It was the first show I’d binged on and the first show I could see their structure was really different. The Bridge, The Eagle, Wallander, The Unit. I used to watch all of those.”

There has been a lot of speculation surrounding The Kettering Incident following the decision to delay its broadcast from 2015 to mid-2016. While it is common for films to have a considerable delay between production and release, it is unusual for a TV series to sit on a shelf for that long. For delayed films, the reason is usually because the film isn’t very good and the studio are seeking a way to reduce their losses.

Foxtel television chief Brian Walsh explained that Kettering, which was filmed in 2014, wouldn’t have been as well-received if it was broadcast when originally scheduled:

“It was originally programmed to go to air last September. When I saw the show, I absolutely felt that it was a program that needed to be viewed in winter. It is a show that is set in Tasmania in a cold climate. It absolutely has to be watched in winter months.

“I’m very conscious of the fact we’re in a very competitive space and I want this show to have every chance at success. I wanted to use the last six weeks of Game of Thrones to market Kettering. Kettering will go into the Game of Thrones slot on a Monday night. It’s programming 101.”

For Walsh, The Kettering Incident is completely on brand for Foxtel and the sort of productions it is seeking to commission.

“Australians want to see their stories on screen. I’m proud of the fact Foxtel plays such a significant part in that endeavour. I’m particularly pleased that the sort of dramas we’re making are those that are distinctive, bold, provocative, and different from what you would find necessarily on commercial networks. That’s why we have Kettering. That’s why we have Secret City. These are shows that are particular to premium cable television networks and I think they stand up with the best in the world,” he said.

Madden backed up Walsh and explained that as a creative, she felt that Foxtel supported her storytelling vision.

“I said I have a bold and compelling story, but so many other networks have said they want bold. But they don’t. Brian went there. He’s very open to being brave in his storytelling and we don’t have that much in Australia. I was forever grateful because it’s a very unusual show,” Madden explained.

The delay on Kettering shouldn’t be seen as a reduction of Foxtel’s commitment to premium television. Rather, Walsh said, the subscription TV company is looking to produce several limited-run series, propped up by ongoing series like A Place to Call Home and Wentworth.

“The decision to do A Place to Call Home was a marketing decision. That was a show that had an inbuilt audience around Australia. The Seven Network had marketed that show heavily for two years and gave up on it because the audience for that show was not attractive to a commercial network. We recognised we could fill a gap. The same way that commissioning high-end premium drama fills the gap because commercial TV is not in that space, so too is serial drama for an older demographic, which is not very well catered for on commercial networks because they don’t necessarily attract the demographic a network like Seven was after.

“We’re continuing to be in the premium space. Deadline Gallipoli, Devil’s Playground, Secret City, Kettering Incident, and the other eight dramas we currently have in development are all in that premium drama space. Wentworth and A Place to Call Home are our ongoing continuing dramas that will return each year. I think it is important to have those stable dramas that will run year-in, year-out. It affords us the opportunity to commission short-run event series, of which Kettering is one. We will do at least two of those, every year, for the foreseeable future.

Kettering actors Matt Le Nevez and Alison Whyte are both excited to now be able to share the show with the world.

Series star Matt Le Nevez, who also has a role in Love Child which is currently on-air and the Ten production Brock due at the end of the year, is excited that he can finally share Kettering with the world: “It’s exciting. You can do those jobs over two or three years and then suddenly they’re all coming out in the same six months. “For me the excitement of being able to screen these three shows in three different series at the same time is paralleled by the excitement of being able to work across the industry with very different people. I’m fortunate where I can work with filmmakers like Rowan Woods, Tony Krawitz, Vincent Sheehan, and Vicki Madden on something like The Kettering Incident and then suddenly I’m thrust in the world of the 70s and Brock and I get to work with Rick Maier and everyone at Ten and try to support that incredible true story. I’m fortunate where I get a day’s work in this industry in any city, in any job. I just happen to be able to say that hopefully it’s a beautiful show like The Kettering Incident. I remember a time in my career where I was just lucky to get a few lines as a supporting actor.”

Actor Alison Whyte, who has a supporting role on the show, also commented that Kettering is part of a run of different shows she had on the boil at once: “While I was doing Kettering, I was doing four different things. I was doing Doctor Blake, Glitch, and The Dressmaker.”

This is the second series that Whyte has worked on for Foxtel, having been part of the ensemble of Satisfaction. That series started with her character working as the receptionist at a high class brothel. The Kettering Incident offered a wildly different experience for Whyte.

“It’s a very different show than Satisfaction. A little less lipstick,” she laughed.