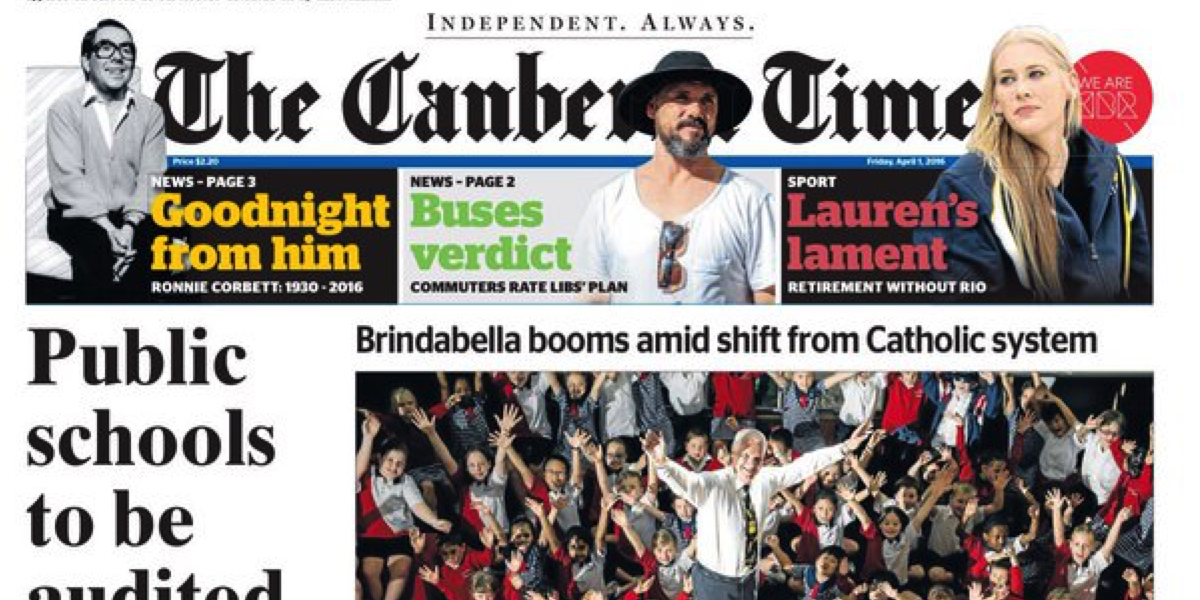 Many of the sections of The Canberra Times are already presented in compact format and in the second half of 2016 all pages of the weekday, Saturday and Sunday Canberra Times will adopt the same size as Fairfax stablemates The Australian Financial Review, The Sydney Morning Herald and The Age.

“The new size is easier to handle and navigate than the present broadsheet,” Canberra-based ACM editorial director Rod Quinn, a former editor-in-chief of The Canberra Times, said.

“The Canberra Times is changing to a more convenient shape but it will continue to deliver the same quality, independent journalism and agenda-setting local news coverage that has earned the respect and trust of Canberra readers for 90 years.”

Plans were also announced to restructure editorial and sales teams for The Canberra Times, which will involve a small number of voluntary redundancies. Fairfax’s federal Parliamentary bureau in Canberra is not affected.

The proposed changes are part of ACM’s continuing transformation of its community publishing operations, which has involved progressively refreshing and revitalising 100 mastheads since 2014.

Director of ACM, John Angilley, said: “We are committed to providing local coverage for Canberra readers by embracing change to ensure The Canberra Times remains the most trusted source of news and information in the community.

“By modernising our newsrooms and better focusing our resources we are strengthening The Canberra Times, which this year celebrates its 90th year delivering quality local journalism to the local community.”

Staff across ACM’s publishing operations in Goulburn, Bowral, Queanbeyan, Yass, Crookwell and Braidwood were also briefed on a separate proposal to refresh and revitalise the newspapers and websites in the communities they serve. This involves mastheads in those regions moving to a new digital-first publishing system with more online content and a significant investment in training and skills development for editorial and sales staff.

Under the plan, the Queanbeyan Age would be merged with the Queanbeyan edition of The Chronicle and relaunched as a new-look free weekly newspaper, and the Cooma-Monaro Express and the Summit Sun at Jindabyne would no longer be published.

Across the ACT publishing operations and The Canberra Times there are expected to be voluntary redundancies of approximately 12 full-time equivalent positions.

“Our full focus and attention in the weeks ahead is on consulting with our staff to ensure everybody fully understands the proposal and has the opportunity to share their feedback with us,” Angilley said.