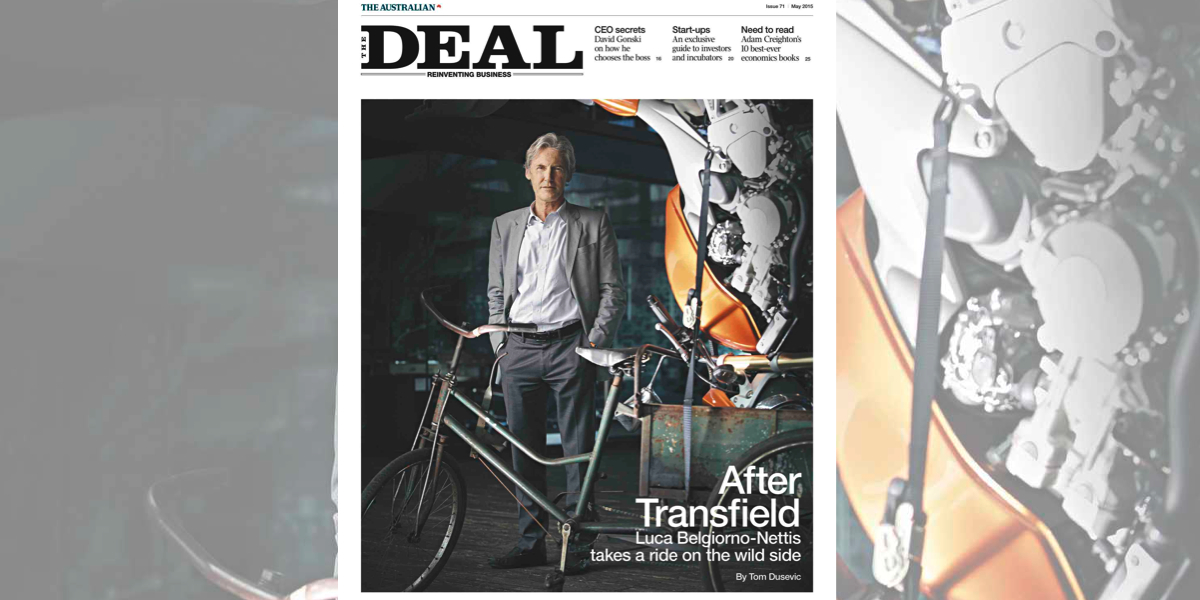 Title: The Deal
Issue: May 2015
Publisher: News Corp
Total Pages: 28
Cover Price: Free inside The Australian
Ad Pages: Seven, including one house ad for The Australian Plus, the paper’s rewards program
Coverlines that work: Luca Belgiorno-Nettis takes a ride on the wild side
Editor: Helena Trinca

As a whole, newspaper-inserted magazines didn’t fare much better than other magazines and newspapers in the latest round of circulation and readership data released this week. The Australian’s The Deal was the clear exception, with its readership rising over 20% in year-on-year comparisons. Today, we take a look at the magazine to see what it gets right.

Rugby legend John Eales gives advice on how to transition in the workplace on half a page, while the other half looks at what workers can learn from the contestants on the 30th series of Survivor. Miland Rout profiles GM of St James Ethics Centre, Ed St John, in an interesting piece in which he discusses his work at Rolling Stone, the changes he witnesses in the music business and scouting The Voice’s judging panel.

In association with investment group Macdoch Ventures, The Deal has produced a guide to start-up funding which is available on The Australian’s website. To promote the initiative, Ben Wright and Petra Andren’s ATP Innovations, Scale Investors, BlackCitrus, KPMG Energise, MH Carnegie & Co and Airtree are all profiled. Economics correspondent Adam Creighton lists his eight favourite books on point (all which sound quite similar), then the magazine is capped off by John Connolly’s look at the world’s great luxury hotel chains – Paris’ the Ritz Carlton, Hong Kong’s Mandarin Oriental and New York’s The Carlyle Hotel.