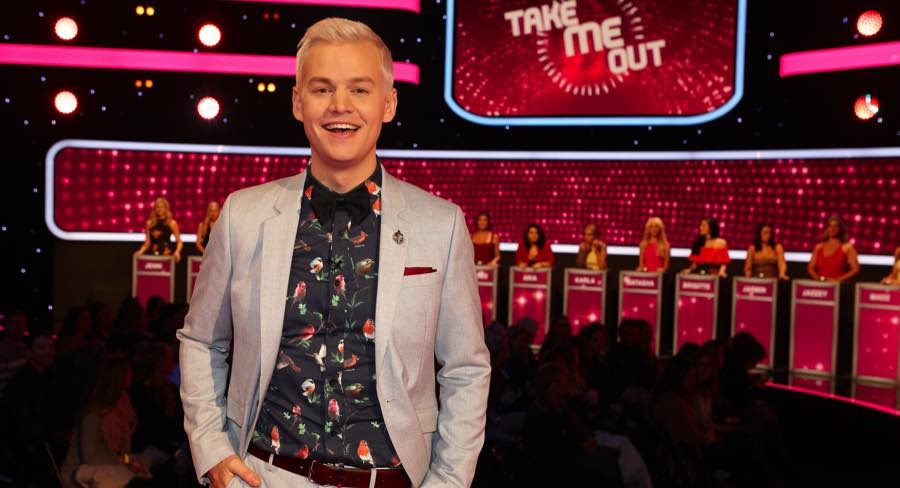 Too many dating reality shows take themselves too seriously. Seven’s upcoming format Take Me Out is different, comedian and host Joel Creasey told Mediaweek.

When it was pointed out that the same assumptions could be applied to the participants of Take Me Out, Creasey said. “Absolutely! We’ve got some fame whores on there and some absolute losers who can’t get themselves a date. We’ve also got some people who thought, ‘Let’s do it for the experience.’ Then we also have some people who are genuinely there to find love. “I call each one of them out for what they are. We don’t try to pretend we are something we are not.”

The show is a local version of Chinese dating show If You Are The One, which aired on SBS in Australia. There is also a British version called Take Me Out, which has been airing in the region for eight years.

The Australian edition of Take Me Out leans more towards the UK format than the Chinese one, Seven’s director of programming Angus Ross told Mediaweek. “It’s had a lot of success,” he said. Ross described the local version of Take Me Out as an “alternative” to other shows currently on TV, including The Block on Nine and Ten’s Australian Survivor and The Bachelor.

Meanwhile, Creasey spoke about the format as an alternative to other dating reality shows on Australian TV such as Married at First Sight and Bachelor In Paradise.

“Dating needs a bit of a shake-up in this country. Take Me Out is funny and almost a piss take of all the other dating shows,” Creasey said. “If you are bored with dating shows, we are really for you. It’s a bit of an antidote.”

This is the first time Creasey has presented on TV as a solo act. “I am used to having a co-host,” he said. “It was nice in a way to be on my own but, by the same token, there is an added pressure when things fall squarely on your shoulders. You don’t have that person to roll your eyes with or someone to debrief with a wine at the end of the day.”

Take Me Out is airing at the same of year as The Bachelor. The Ten show is an established brand in Australia and the 2018 season is, once again, proving to be successful for the broadcaster. Asked about this competition, Ross said that even though the show is running at the same time of year as The Bachelor, it wouldn’t be airing in the same day and timeslot as the Ten reality show. “It wouldn’t be a smart move.”

Creasey is no stranger to Australian TV viewers. They will have seen him as the host of SBS’s Eurovision coverage alongside Myf Warhurst and on Ten’s Show Me The Movie! with Jane Harber and Rove McManus. Creasey’s stand-up comedy has also been filmed for Netflix and will feature on the streaming service’s stand-up series in 2019.

“Working with Netflix was a scary and exciting experience. It was a new beast for me. I know my way around the Aussie network but I didn’t know anyone at Netflix,” Creasey said. “The North Americans take a complete different approach to things. They are very organised and have bigger staffs than the Aussie networks. One day, we had a production meeting about another production meeting we were going to have. [Laughs] They cover all bases.”

There isn’t much Creasey hasn’t seen in the Australian entertainment industry. In fact, he doesn’t know life outside showbiz. His parents were actors in Star Wars. Creasey was a child actor and started his stand-up career when he was 17. “I did productions and commercials when I was a child actor. I am much like Drew Barrymore, minus the rehab.”

After Take Me Out airs on Seven, Creasey will have finished all his TV commitments for the year. “I will start touring again,” he said. It couldn’t have come at a better time too, because his stand-up “is all autobiographical”.

“It comes from the stories I get from behind the scenes of the jobs that I have worked on,” Creasey said.

Take Me Out will premiere on Seven on September 3 at 7.30pm.