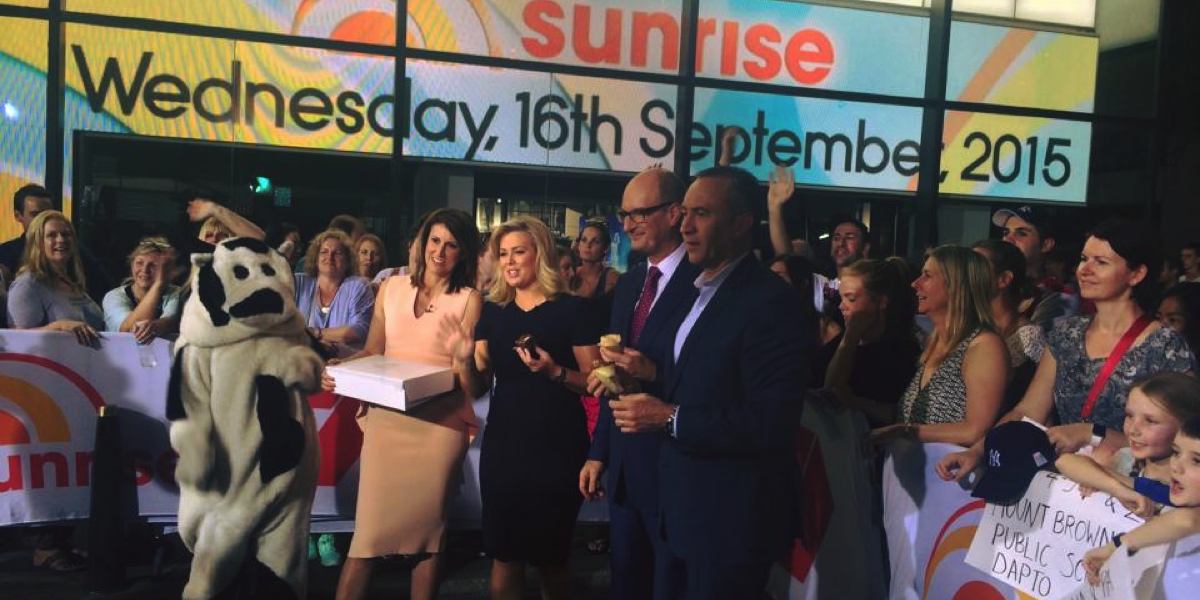 Sunrise not the only Seven team in the US: Hamish McLachlan turns up in Kentucky

Sunrise landed in its third country in three days this morning. It was a close call though with their British Airways flight bound for New York was delayed out of Heathrow by three hours. The schedule was so tight that the team did their make-up on board the plane so they could make a dash from the airport to the NBC studios at 30 Rock where they were broadcasting today.

Guests on the program today, which went to air at 4pm in New York, included Ed Sheeran elsewhere in the US. Sitting alongside him was Jamie Lawson and the chat featured Sheeran swearing and talking about strippers.

He was also distracted by his phone, a video and Sam Armytage even dared him at one stage to say something that would get him taken off air. He seemed tempted but declined the offer.

Guests live with the team in New York included showbiz reporter Nelson Aspen who turned up with goodie bags from Macy’s.

Edwina Bartholomew seems to have travelled much further though – she made it to San Francisco and then travelled into Mendocino County. It has taken us three days to wonder if the weather segments are pre-recorded.

The daily forecasts sound like a voice over not recorded on location.

Also travelling a lot this week for Seven is sports broadcaster Hamish McLachlan who has turned up in Kentucky on Sunrise today where his guests included Gerry Norman and Katie Page. McLachlan is filming a story on the thoroughbred American Pharoah who won the Triple Crown, which comprises the Kentucky Derby, Belmont Stakes and Preakness Stakes. The story will run during Seven’s Melbourne Cup Carnival coverage.

He is also doing stories on the two biggest stud farms in the US – Spendthrift and Claiborne that will run during Seven’s Magic Millions coverage.

McLachlan will be back in Melbourne for Game Day on Sunday.