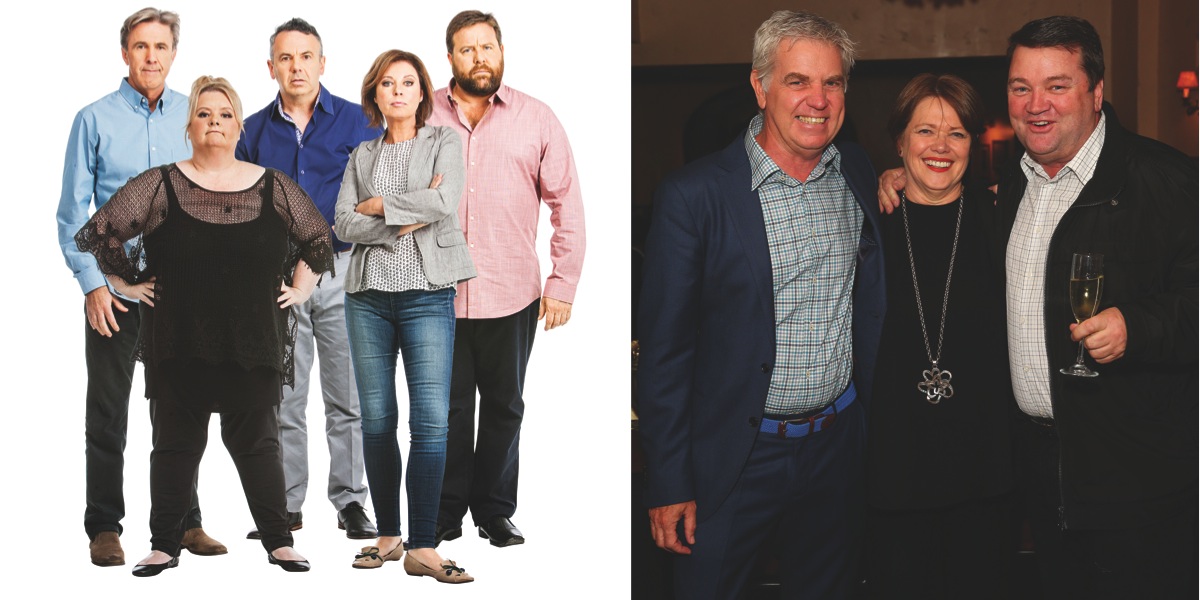 Asked if he was any wiser about what works on Open Slather at the start of the second half of the 20-episode season, co-executive producer Rick McKenna told Mediaweek he wasn’t sure. “These shows are always organic. The one thing we hear a lot is ‘Is it funny or not?’ There has been some fine-tuning and honing. There are so many areas we are delighted with. The areas we knew would be the toughest are what we are focusing on. The art of sketch comedy writing is almost a lost art in Australia. In terms of long runs, sketch comedy has had a very checkered past in the last 10-15 years.

“The short answer is there haven’t been jobs for sketch comedy writers for a long, long time.”

The series has been a substantial investment from Foxtel and when you watch you see that investment in the number of segments crammed into each episode. McKenna noted: “We work on a 30% attrition rate with about 30% of what we shoot we don’t air. It’s even higher than that at script level.

“The reasons we might not use filmed segments are: we didn’t think the performance came off, the tone wasn’t as we intended, or, sometimes, what looks hilarious on paper doesn’t come to life, and you have to bury it and move on.”

Asked who decides to axe a segment, McKenna said often it is just instinctual. “When you have someone like Glenn Robbins, Magda or Marg or even Shane and Stephen with an idea, I would never profess to know what works more than they do. If the performer pleads hard enough we will give it a run. We will then sit down together and look at it and see how it worked and maybe also share it with the network and get their feedback. Often it is very subjective.”

Foxtel has continued to be very supportive, said McKenna. “The passion is a strong as when they first had discussions with us about it. They understand this is a long-term process. Foxtel thinks the cast is very strong and they invested in a long development process for the series. We held weeks and weeks of workshops, which is almost unheard of for a comedy show.”

Plenty of people wanted to be a part of Open Slather. “Over 400 people applied for gigs on the series and we whittled that down to the 12 newbies that joined the show. Foxtel sees long term prospects for the entire cast and they know it takes time to build and get right.”

When asked if Open Slather could have survived on FTA television, McKenna said: “The FTA networks have played an amazing role in the development of comedy to this point in time. Television programming is very cyclical and the cycle at the moment is very much about big event shiny floor/shiny kitchen/shiny restaurant. I couldn’t imagine one of the FTA networks investing in a project like this. The nightly audience numbers are everything for them and you can’t afford a misstep and comedy is never developed in a short time.”

McKenna reminded us that when Fast Forward was developed there were no overnight ratings. “When they started the next day you were either dead or alive depending on that night’s audience, and that is not the way to nurture a comedy team – neither performers, writers or producers. You think all your scriptwriters are writing scripts the next morning, but they are working on their CVs because they have seen the overnight numbers!

“If you don’t smash it out of the park pretty quickly you will soon be moved to 9.30pm, then 10.30pm unless you are on ABC or SBS, who will put a show on and back it in and hold firm because they don’t have the commercial demands of what an advertiser wants to spend their money on.


After running for 10 weeks, Open Slather had a break and has just returned with another batch of 10.

“There is some continuity and an evolution of some of the characters. Part of our rhythm is what else is happening. Seven, Nine and TEN are launching new programs and we are very focused on those [as potential subjects] just as we focused on Shark Tank earlier this year.”

•  What about more song parodies?

“They are very hard to get right. You need a perfect storm of a broad appeal popular song, a great video clip to parody and the performers who can pull it off vocally and visually. We love doing them and they are the things that get shared the most. We are always on the hunt for a song.”

Best known for his work as executive producer of Kath and Kim, McKenna said there is just one project on his mind at present. “We are totally focused on this. This is an amazing opportunity Foxtel has given us and we are head-down on making this a long-running franchise.”


“We have divied up the roles and it often comes down just to who is available on the day to attend a shoot or to sit in on script sessions. When it comes down to working out what will go into each show, Laura and I do that with Paul the producer. That will often involve input from the experienced writer/performer/producers.”

•  Why is it okay to not like some sketches?

“On any sketch comedy show ever if you don’t like one thing there will be something else coming soon which is a key principle. On our show we have one of our great young performers, Eli, in a cat suit in an office environment. I have many people telling me it is stupid and it drives them mad. The next person will bang the table and tell me it is hilarious and the funniest thing they have ever seen. Some are sketches are hits with lots of people, others can be totally polarising.”


Some Open Slather writers made their feelings well known in the industry that they were not happy with the way the show was being run.

“I have never worked on a TV show where everyone was happy. Do you know how you make a writer happy? You tell them everything they do is amazing and great. You tell them you will use their work for the entire show. Not everything that every writer presents is going to be right for the show. We gave lots of writers a go, some writers wrote for 10-16 weeks without any of it getting on screen. They would argue that our taste is up our arse because we were not using their stuff. Laura and I would then say, ‘OK, go and make you own show.’ As producers we are entitled to say what will be in the scripts.” McKenna said most of the writers were paid regardless of whether the material was used or not. “And that includes the highly experienced writer-performers.

“We set out with 22 writers, the majority being well paid on retainers, some of it didn’t work out and only one or two writers were let go early and paid out.”

McKenna added that of the other half dozen who were replaced by other writers were contributors whose contracts had expired. “Some of those people said their work was not getting used and they were unhappy. We were going ‘We have paid you for 10 weeks, your work hasn’t got up, we’re unhappy. The contract is up, it’s been great, all the very best, no hard feelings.’”

One of McKenna’s biggest success stories wasn’t a comedy. He was the first channel manager and employee #1 of Fox Footy Channel which first launched in 2002. The channel originally had just three live games of AFL a week and they certainly weren’t the pick of the clashes.

“I think back to those days when Gary Fenton, Pete Campbell and myself thought up different shows and then to see them kicking on today is just great. We started some of those for peanuts and its great to see them thriving.

“It is also wonderful to see so many people from both behind-the-scenes and on camera still there.”


“Pace is really important so we don’t lock in specific times. However if it is over two minutes it better be bloody good and have a structure to it that almost verges on a scene from a sitcom and it better be heading to a significant punchline – the pay off had better be worth the wait.”