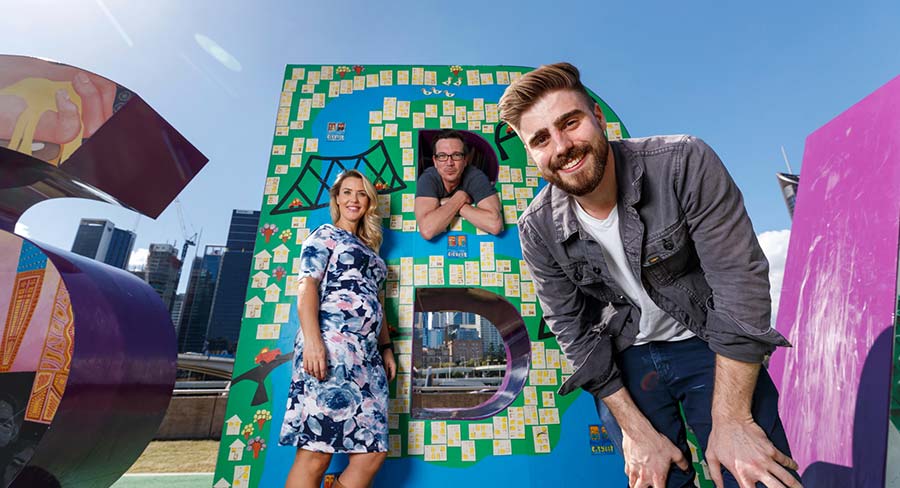 Wake up with Stav, Abby and Matt on hit105 from 6am to 9am weekdays.

Southern Cross Austereo has announced new contracts for its hit105 breakfast hosts in this release:

They talk to the most interesting people in Brisbane, do things no ordinary Brisbanite would consider and in between they take the pulse of the city every morning, telling the stories that matter and bringing smiles to hundreds of thousands of faces – they are hit105’s Stav, Abby and Matt and their early morning wake-up calls will continue, with news the show has been locked in until the end of 2020.

“We are so excited to have Stav, Abby and Matt confirmed as our hit105 breakfast show until the end of 2020. They have had a fantastic 12 months at the top of the radio surveys here in Brisbane so it’s not only brilliant for us as a station, but for all the listeners out there who tune in daily knowing their favourite show is locked in long term,” he said.

“We kicked off the year with a raft made from goon sacks and then Stav, Abby and Matt paddled it across the Brown Snake; we gave away a year’s salary; Matty broke his leg in a footy game; and Abby has just announced she is pregnant. So, keep watching this space – it’s going to be a fun ride. “Waking up with Stav, Abby and Matt on hit105 means rolling over and hearing exactly what you need to know every morning – what’s happening in Brissie and the world, what’s hot, which celebrities have taken the worst selfies and who in Australia is creating all the fuss. Stav is everyone’s funny best mate, Abby is Mrs Brisbane and Matt is the cheeky family man. Together they are one big breakfast feast of fantastic.”

Southern Cross Austereo Queensland executive general manager Damon Rielly said: “With Brisbane being the most fiercely contested radio market in the country, and other Brisbane breakfast shows experiencing instability, locking in Stav, Abby and Matt was an important move to provide Brisbane consistency to start their day.

“Breakfast sets the tone for the rest of the day, and we are thrilled to have Stav, Abby and Matt locked in until the end of 2020. This gives our listeners security, our partners and advertisers security and it allows our breakfast team to think long term and create some wonderful experiences for the city.”

The news follows a recent announcement by Southern Cross Austereo Brisbane that it would relocate from its current North Quay home to a new custom-fitted headquarters at The Barracks in 2019, representing what will be one of the largest and most technical moves in the country.

Wake up with Stav, Abby and Matt on hit105 from 6am to 9am weekdays.