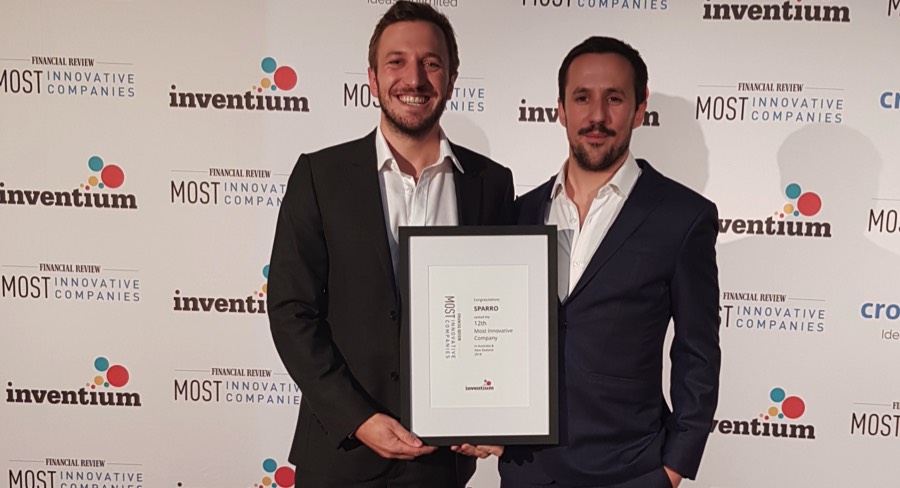 Sparro ranked 12th on the overall list from more than 1,000 nominated organisations across Australia and New Zealand.

Independent digital marketing agency Sparro has been recognised as one of Australia and New Zealand’s Top 100 Most Innovative Companies by The Australian Financial Review. The annual list, published by the AFR, is based on a rigorous assessment process managed by Inventium in conjunction with a panel of industry expert judges.

Sparro ranked 12th on the overall list from more than 1,000 nominated organisations across Australia and New Zealand. The list was announced last night at a sold-out event at the Four Seasons Hotel in Sydney.

Sparro co-founder and partner Morris Bryant said, “To be recognised on the AFR’s Most Innovative Companies list is a huge honour for us – testament to our fantastic, forward-thinking people – and, more importantly, for an independent Australian agency.”

“We’ve always wanted to change the idea of the traditional agency model by recruiting people without a preconception of what an agency is and does. Cameron (Bryant) and I both studied degrees outside of marketing, so we aren’t interested in what experience or degrees applicants have – we just want to recruit the sharpest minds to help us grow our vision. So, we developed our own interview process that valued character, approach and potential over industry experience. We place value on problem-solving abilities and willingness to learn.”

Cameron Bryant added: “During interviews, we test applicants against our unique Sparro values: agility, transparency and providing value. We’ve since hired more than 40 people from diverse backgrounds such as engineering, business, geography, journalism, statistics and the arts. This collaborative, creative process strengthens our team, our work and our relationship with clients.

“We have no traditional account managers – just doers. Everyone is in both a hands-on and client-facing role, and we have no secondary functions – no sales, HR, finance or even a receptionist. We believe having channel experts on the tools is critical to our clients’ success, and we’ve made this a priority since our first hire.”

Sparro has achieved 85% revenue growth this year and its paid media business is up 119% year-to-date. The company was also recently named Asia Pacific Innovator of the Year at the 2018 Bing Partner Awards, which were announced in Seattle, USA. The agency’s clients include Estee Lauder Companies, Catch, Bing Lee, Rydges, QT Hotels, TAFE NSW and Domino’s Pizza.