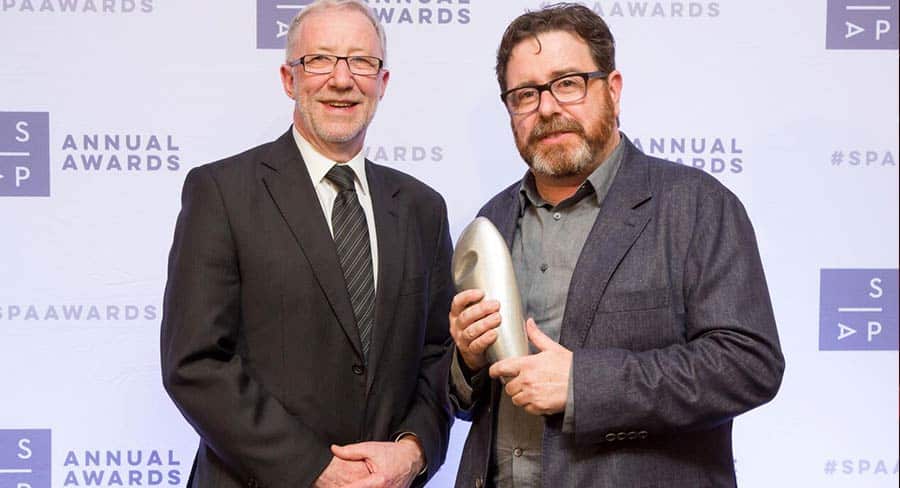 Guesswork Television was named Media Super Production Business of the Year and shared the win for Comedy Series Production of the Year for Rosehaven with What Horse?

Guesswork’s talent-focused approach sees it working collaboratively with writers, performers and directors who are the driving force behind projects. In 2017-18 Guesswork continued to make waves in the comedy world, not only with its second successful season of Rosehaven for ABC and Sundance, but also Hannah Gadsby: Nanette on Netflix and the loud and proud debut of Get Krack!n. Guesswork made strides in other genres too – with the smash hit debut of game format Hard Quiz, provocative factual series Corey White’s Roadmap to Paradise, digital-first comedy series The Edge of the Bush, and the return season of satirical hit The Weekly with Charlie Pickering.

Aquarius Films walked away with the Screen Business Export of the Year award. In the last 18 months, the profile of Aquarius has risen significantly both in Australia and on the international stage. Lion was a phenomenal international success, nominated for six Academy Awards and winning 12 AACTA awards. Berlin Syndrome was selected to screen at Sundance and Berlin and sold to Netflix in a seven-figure deal. These two projects significantly raised the profile of the Australian film and television industry overseas and brought money into the local industry, as well as providing hundreds of jobs for local crew.

Bunya Productions was the biggest winner on the night, taking home three awards for Telemovie or Mini Series Production of the Year, Feature Film of the Year and Breakthrough Business of the Year.

“The strong slate of productions this year by Guesswork and Aquarius have continued to open new pathways for Australian producers, both overseas and at home. I congratulate them both on these latest accolades – along with all of our winners tonight. The Awards have showcased the strength of the Australian independent production sector and I trust that our members will continue to innovate, create and push forward like true mavericks in the year ahead,” said Screen Producers Australia CEO Matthew Deaner.

The full list of winners at the 2018 SPA Awards: