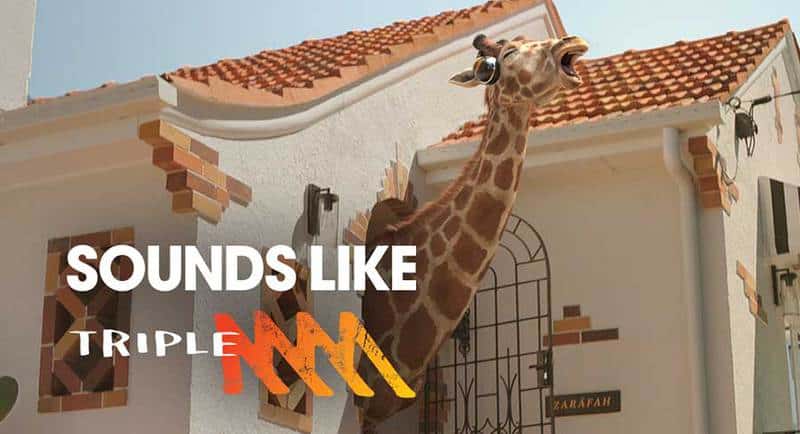 • The Sounds Like Triple M campaign was created by Thinkerbell

Triple M has launched the next phase of its ‘Sounds Like Triple M’ advertising campaign with Bruce the giraffe who busts out of his living room and takes to the streets to share his enthusiasm for rock music.

In the next stage of the ‘Sounds Like’ campaign, created by Thinkerbell, veiwers see Bruce on the streets to the surprise of neighbours as he belts out The Choirboys’ Run to Paradise rock anthem.

Bruce encounters another giraffe, Babs – head out the sunroof of her red Toyota Supra – singing the same song with just as much enthusiasm, and both rock out to Triple M.

Bruce the animated giraffe was introduced in March this year thrashing around his 1970s style lounge room, singing along to Whitesnake’s iconic power ballad – Here I Go Again. Why? Because it’s too hard to describe what ‘Sounds Like Triple M’ with words, so instead the network decided to show it…and a singing giraffe thrashing around a lounge room gave the audience a pretty good idea.

Head of Triple M, Mike Fitzpatrick, said: “Bruce is just like every Triple M listener coming out of 2020 – excited to be out, with the world’s greatest rock station in their ears and wearing their inner rock star on their sleeve.”

SCA chief marketing and communications officer, Nikki Clarkson, said: “We are excited to be able to continue with this campaign, bringing Triple M to life in a memorable and never boring way, especially with an Aussie classic track such as The Choir Boys’ Run to Paradise.”

Thinkerbell Co-founder & chief creative Tinker, Jim Ingram, said: “In this latest iteration of Bruce we thought it was important to get him out of the house –  he’s been cooped up for a while and was going a bit stir crazy.  So, it’s good to see Bruce exploring his neighbourhood and rocking out to Triple M at the same time.”