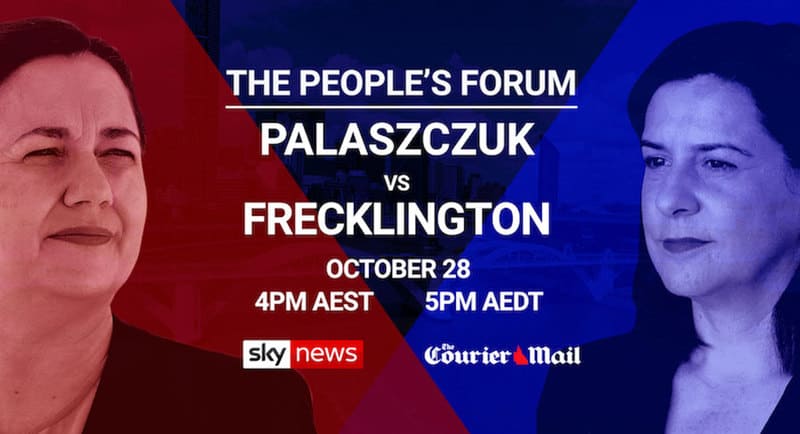 Sky News and The Courier-Mail will host the People’s Forum on Wednesday 28 October in Brisbane with Annastacia Palaszczuk and Deb Frecklington taking questions from undecided voters three days out from the Queensland Election.

Gilbert said: “The People’s Forum approach is the best for a leaders’ debate because it’s real voters face-to-face with the contenders. Sky News has established this forum as a key element of both state and federal election campaigns and a crucial chance for leaders to make their final pitch to voters.”

Paul Whittaker, Sky News Australia chief executive officer said: “The stakes are high for the upcoming Queensland Election, with the winner securing the state’s first fixed four-year term. The Sky News/The Courier-Mail People’s Forum is the only opportunity for Queenslanders to see the leaders go head-to-head and answer questions from undecided voters about their vision for the Sunshine State’s future.”

Chris Jones, The Courier-Mail editor said: “Election campaigns are usually a series of stage-managed picture opportunities where the ‘real people’ have been vetted by party advancers. This will be the first time the leaders won’t have had the chance to see who’s coming – and so the People’s Forum will be the most authentic event of this campaign, with real undecided voters having the chance to ask their own questions of the two women vying to lead our amazing state.”

At 3:00pm AEST/4:00pm AEDT political reporter Tom Connell will host a pre-forum analysis as he anchors Afternoon Agenda with Kieran Gilbert live from the forum venue.

Palaszczuk and Frecklington will then face the group of undecided voters live for questioning from 4:00pm AEST/ 5:00pm AEDT.

The result of the audience votes and who won the debate will be announced when Kieran Gilbert joins Peta Credlin during Credlin at 5:00pm AEST/6:00pm AEDT.

On Saturday 31 October as Queenslanders head to the polls, Sky News will deliver comprehensive coverage and analysis of the Queensland Election 2020.

The Sky News/ The Courier-Mail People’s Forum will also be streamed on skynews.com.au, on ‘Sky News Radio’ through the iHeartRadio App and to Courier Mail subscribers at couriermail.com.au.