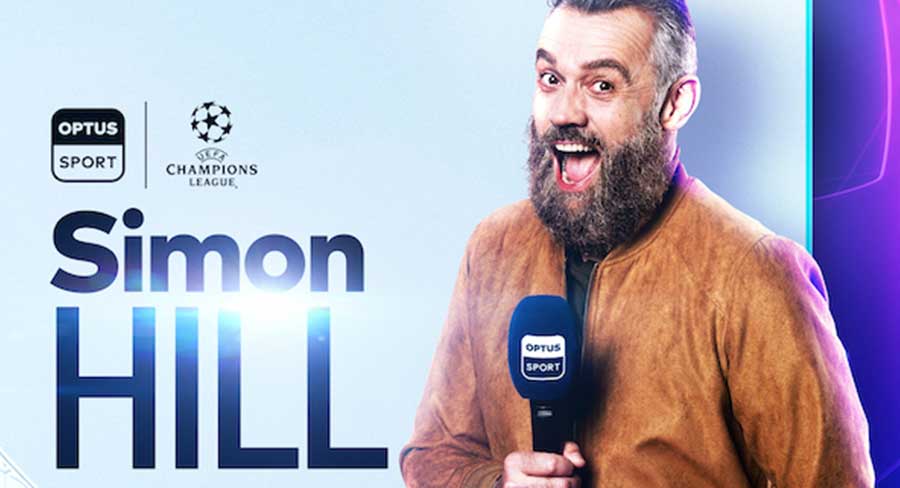 Optus Sport has announced commentator Simon Hill – Australia’s voice of Football – will join its coverage of the UEFA Champions League and Europa League competitions this month.

One of the most respected voices in Australian sport, Hill will add his distinguished tone to the featured game on every matchday of the Champions League knockout stages, in addition to the finals of both European tournaments.

“To have the privilege of calling the world’s best club competition is a huge honour, and hopefully I can do it justice for our Australian audience,” Hill said.

“Many people rate it a better standard of football than the World Cup, and it’s easy to see why. The world’s best all want to play in this competition, and it has a history that resonates with so many around the world.”

Hill’s voice is the soundtrack to some of the biggest moments in Australian football, such as the Socceroos’ 2005 World Cup qualification, the nation’s first men’s World Cup goal in 2006, and the Asian Cup Final triumph in 2015.

The Manchester-born commentator will call the Champions League for the first time since 2005 and brings a wealth of experience from his time living and breathing football in Europe.

Whilst always neutral in the commentary box, the Manchester City supporter’s first task will be to call the second leg of City’s Round of 16 tie with Real Madrid this Saturday – which will be a unique moment in his career.

“Twenty odd years ago, I stood on an open terrace at York City watching my team lose in the third division, so that win at the Bernabeu in the first leg had me rubbing my eyes in disbelief,” Hill said.

“All the remaining Round of 16 ties are finely balanced, and of the others I’d say Napoli v Barcelona holds the most fascination, especially as I love the firebrand that is Gennaro Gattuso!”

“Of the players – to get to watch and call the likes of Ronaldo, Messi, Neymar, De Bruyne, Lewandowski – I think that speaks for itself.”

“To add Simon to Optus Sport’s Champions and Europa League coverage really is a privilege for us,” said director of sport and presenter Richard Bayliss.

“The hair stands up on your neck when you hear Simon’s great calls of those seminal moments in Australian football, and to have him call the best club competition on the planet will be something to savour.

“After the Round of 16 ties are completed, there are no more return legs; each match is a knockout. This mini tournament where games come thick and fast means it will be one of the most unique spectacles European football has ever seen.”

Hill will also appear as a weekly columnist on sport.optus.com.au, and on Optus Sport’s European matchday podcasts.

In addition to live studio coverage which includes extensive post-match discussion for breakfast-time viewing, Optus Sport will provide Mini Matches and highlights for each game, as well as magazine shows, features, interviews, press conferences and behind the scenes material, as well as in-depth written features.

The UEFA Champions League resumes on Saturday morning at 4.45am AEST when Manchester City take a 2-1 advantage into their tie with Real Madrid, while Juventus look to overturn a 1-0 deficit to Lyon in Turin.