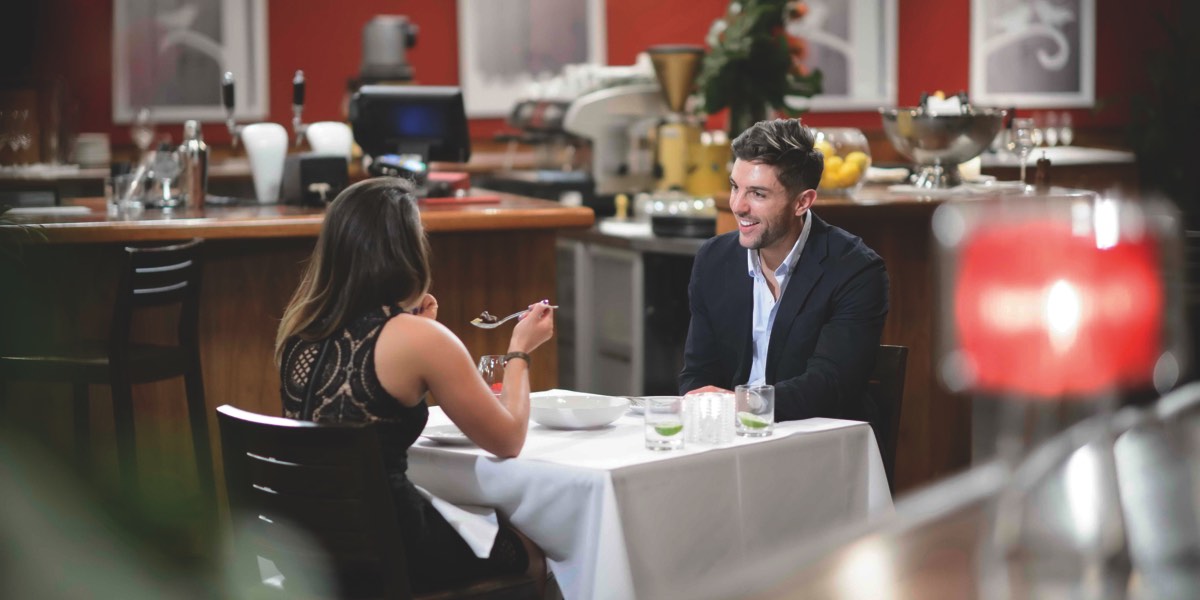 The way that singles are dating and relating in 2016 has vastly changed from the way many singles were dating even five years ago. “I think a lot of people don’t go on first dates any more,” explained Rikkie Proost, the producer of Seven’s new reality dating show First Dates.

“We’re losing the art of romancing because quite often it’s swipe right and see you two hours later. There’s no romance in that at all. The old-fashioned way of romancing someone is the beauty of this format.”

First Dates matches singles to go on a blind date at a restaurant with audiences at home watching every nervous conversation and glance between prospective lovers. The series, produced with Warner Bros for Seven, is based on a UK format which has had four seasons and a celebrity edition go to air.

Despite the way many of us date having changed, Proost believes that it will still be easy for people to connect with the show. “I think everyone knows what a first date is. Though it may be a dying art, most people, even the Tinder generation, do have an inkling of that first moment of being with somebody and whether you connect or not.

“I think that very simple core of two strangers meeting who might be a match is what is embellished upon in the show. Those nerves, it’s those things that come out of your mouth. It’s those incredible looks across the table. It’s that electricity. The art of dating might be dying, but the chemistry, nerves, and exhilaration of an initial connection with somebody is universal.”

To get the chemistry between participants right, casting the show was a significant challenge. The casting team itself consisted of people of different ages and genders at different stages of their own relationships in order to ensure the show reflected a broad range of participants. Initially the team put out a call for people via social media channels, but later sought some people out in real life.

“It’s very important to the integrity of the format that there’s no matching for a car crash,” Proost explained. “There’s matching for the genuine best outcome for both parties involved. Of course, with only a limited amount of applicants on the board. Matching people isn’t easy. You’re not going to have 50 easy matches straight up. Quite often we’d have perfect matches in terms of likes and dislikes, histories, and personality types. But often we’d have stand-out characters that we’d want to find a match for. Then the casting team would go out and bespoke cast. They’d go out looking for the type that somebody is hoping to find. There was a pretty long and involved casting process for that reason. It is always trying to find the right match for the best outcome.”

In casting the show, Proost insisted that his team wasn’t gender-specific in its casting. The open call for applicants did include a number of gay singles wanting to be involved. Proost admitted that there weren’t very many that applied, but that episodes further into the show’s run do feature gay participants. Proost said that if they do reach a second season of the show, they hope that they will be able to feature a stronger representation.

Proost and his team also sought out genuine participants looking for a relationship and not just people looking for their moment on television. “Generally those people don’t end up in the cut because you can tell it’s insincere,” Proost said. But judging a person’s motivation is often more complex. Proost recounted a participant in one episode who seemed like he was putting it on, but was simply like that in real life.

“He’s unbelievably unbelievable,” Proost said with a laugh. “That’s part of being a good producer and being a good caster. It’s being able to spot the sincere and authentic upfront and also the quirky and outrageous upfronts. Or just the different and interesting human beings that are on this planet. I’d like to think that anyone in it for the wrong reasons we flush out quite often before they end up even in the restaurant.”

The First Dates team worked hard to ensure that the authenticity of a date is maintained by the show. The dates are miked-up in a different building and then sent into the restaurant where they will meet their date. On the restaurant floor there are no camera operators or producers, with the hidden cameras operated remotely. The dates are encouraged to be themselves.

“It’s a genuine environment,” he explained. Participants on the show are welcome to have a drink to calm the nerves down as they meet their dates and proceed on to dinner – just as they may on a date in the real world. It’s a real restaurant and they’re grown-ups and they can do what they want,” Proost said.

When considering the series as a whole, Proost likens First Dates to a David Attenborough documentary about the mating habits of the human race. “That’s what the show is like to me. It’s like the pigeon pair off in the corner and the hermit crabs and the way they do their dance. It’s unbelievable how fascinating human beings are in that environment,” he said.

First Dates commences on Seven on Wednesday 3 February at 9pm.