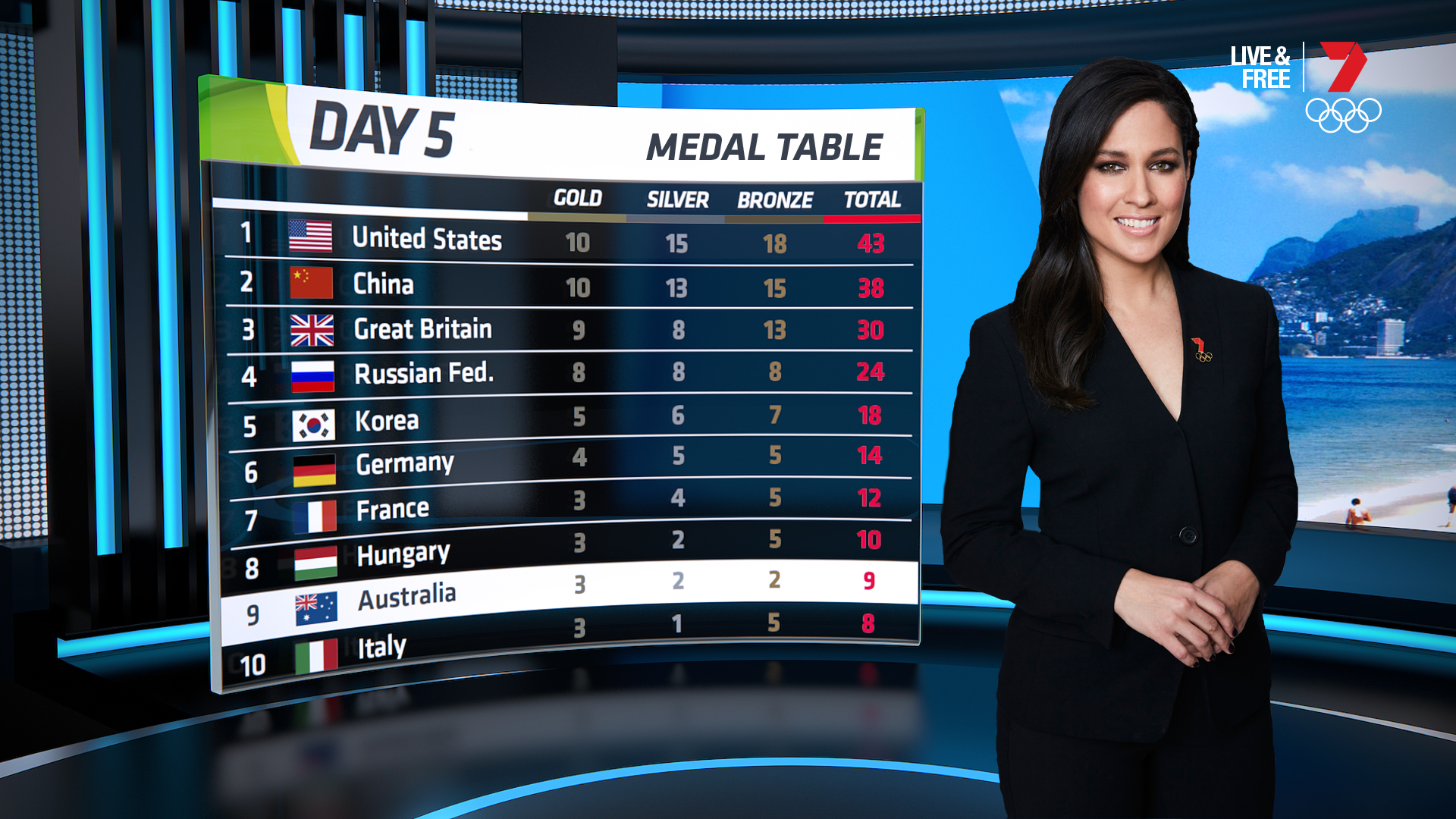 With 3,250 hours of events, Rio 2016 may be Australia’s most ambitious broadcast to date

Considering the anticipation for the Olympic Games by viewers across Australia and the complexity of the broadcast split across three channels, Seven network head of sport Saul Shtein is surprisingly relaxed.

He certainly rejects the idea that the broadcast is a logistical nightmare. Instead he’s leaning firmly into the challenge.

“I’d call it logistically complex. It’s exciting. It’s a dream. People have asked me if I’m worried or concerned – my only concern is I’m not as concerned as I probably should be.

“Having been through a number of these projects over decades, I feel more comfortable about this project than I have about any others. I’ve been lucky enough to do some pretty big projects including Olympics in Athens, Beijing, and Torino, but none of those projects have come close to what we’re having a crack at here. Nothing I’ve ever worked on has been of this magnitude, I’ve got to say,” he admitted.

Of course, the work on the Olympics isn’t just related to the technical challenges of the broadcast. There are also business considerations. Chief revenue officer Kurt Burnette has been working with sponsorship partners in the lead-up to the event. “We’ve been working, in some instances, 14-15 months out, with major partners and sponsors around their lead-ins and integrations. Those conversations have been going on for a while,” he said, but advised that the work with advertisers isn’t finished just yet. “Now we’re getting to the discussions around people who are trying to get to the biggest audience possible in new ways – that’s what the Olympics does. Those conversations will continue right up to the closing ceremony.”

The proposal to advertisers has been an engaging prospect for Seven’s advertising clients. “What we are able to present is a very comprehensive proposition of what they are getting from broadcast, digital and social. We even have live streaming of radio in there,” Burnette said.

The 2016 Olympics coverage Seven is undertaking is the most ambitious we have yet seen in Australia. In addition to the broadcast on the primary Seven channel, the network will also broadcast events on 7TWO and 7mate, delivering up to 900 hours of Olympics live events. Seven will also offer its new Olympics On 7 app. Available on Android and iOS, it will offer video on demand highlights, curated free content from the Olympic Broadcast Service, additional live channels, medal tallies, statistics, and a photo gallery. Altogether, the app will offer 300 hours of additional live competition streams not broadcast on television.

The app is free for Australian viewers, but a paid option for $19.95 per month will unlock all of the Olympics broadcast coverage. With the premium content, a Seven viewer can watch 3,250 hours of live sports.

“This will be the most comprehensive and innovative event that has ever been delivered in Australian media history to the extent that it is offering everything from virtual reality– 200 hours of it – live streaming on radio, every single sport available, the Olympic Games on three free-to-air channels. We’re calling it the future of TV content delivery and it is,” Burnette said proudly.

With so much content available, some viewers may find it overwhelming and difficult to keep track of what is on at any given moment. Through the use of signifiers on screen and other advisory techniques, Shtein believes most viewers will easily find their way to events of interest. 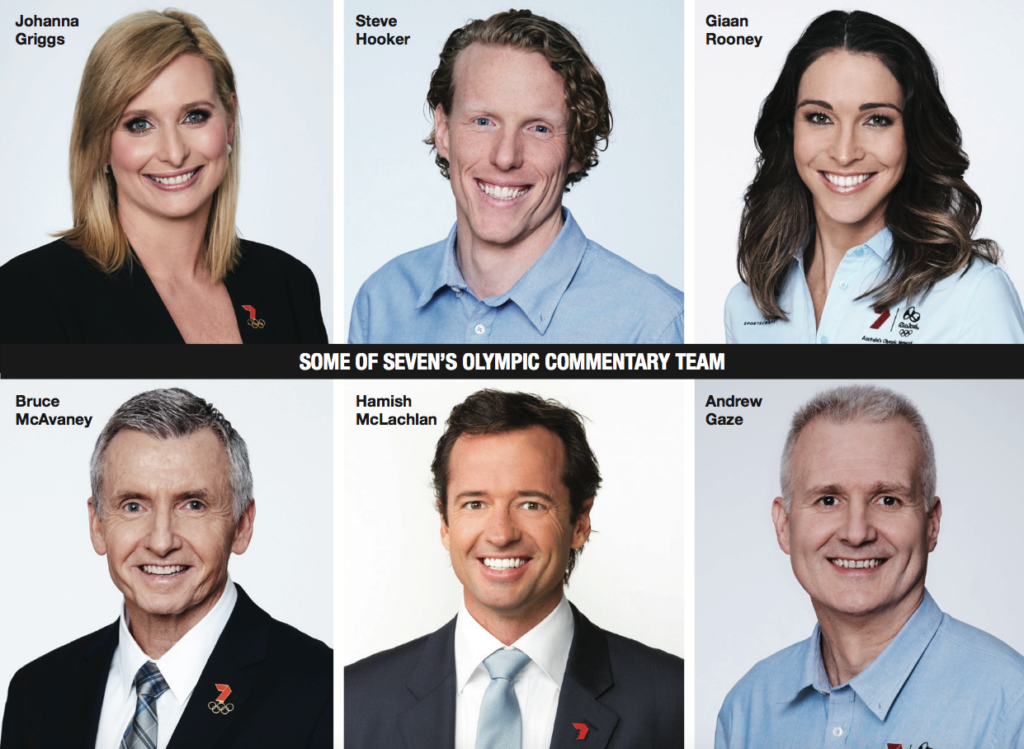 “We’re not going to suddenly be flicking stuff around and jumping around live. Where possible with all of the gold medals and Aussies competing, we’ll try to get those over on Seven, but there may be occasions where there are Australians competing live on all three channels and so it’ll be a matter of steering people to know. We’ve done that in the tennis with our megawalls. There will be Aussie medal alerts or Aussie competing alerts on other channels. A lot of the learnings we’ll be putting towards this have come from our tennis coverage.”

Viewers will find most of the high-profile events are carried on the Seven primary channel, with additional events found on 7TWO and 7mate. Both of the multichannels stick to their channel brands to an extent.

“Only a few years ago when there was just the one channel, if things were happening concurrently you’d do one live and replay something else,” Shtein recalled.

“That’s not going to happen any more.

“Of course, if it’s a big ticket item it will be played live on another channel and then replayed on Seven. It is a bit of a jigsaw puzzle, but the important thing is that we’ve got enough to be able to see everything live. The genre with 7TWO is an older skewing audience and more female. Sports like gymnastics and swimming are more for 7TWO, while boxing and weightlifting are more 7mate. Having said that, if there are three Aussies competing, common sense will prevail,” he said.

The mobile delivery of the Olympics has presented some challenges to the team, but Shtein believes it will be a seamless experience watching from one screen to the next. The graphics on screen have been tested and will look just as good on the smaller mobile screen as a large display TV.

With the time difference between Rio and Australia too, it means many viewers will be wanting to watch events in the morning before work and during the workday. Multiscreen delivery, Shtein believes, is going to be a well-used resource.

“Our three channels will be streamed on any device. The swimming finals are at 11am. There’s the ability for people in the workplace to be able to watch it on their laptop, desktop, or their phone. If your boss comes over and rouses on you, I’d pop into his office to see what he’s got on his screen. That’s one of the beauties of this,” he said.

Approximately 100 Seven team members will be on the ground in Rio, with the rest of the team working on the Olympics back in Seven’s Sydney studios. Having commentators and presenters on the ground in Rio is crucial to a quality broadcast, Shtein advised.

“We’ve got a lot of our main commentators. Bruce McAvaney, Phil Liggett, and Andrew Gaze – a lot of our commentators will be over there as well as our reporters in the field. There’s quite a large on-camera, on-ground presence in Rio.

“For some sports you’ve got to be there to watch them. Try to call a sport like swimming or athletics off a monitor – you’re relying on a director showing you where the Australian is. If the Australian isn’t in the shot…

“You’ve got to be there on the ground to interview the Aussie athletes, to do the colour. Rio is the most spectacular city and we’ll be bringing a lot of the flavour of the city throughout the telecast. It’s not just about the competition.”