Seven has launched its dedicated Olympics app ahead of the Games, which begin on 5 August 2016.

Seven has launched the digital cornerstone of its plans to make the Rio Olympic Games available to all Australians across broadcast television and connected devices: the Olympics on 7 app.

Seven will deploy its Olympic Games content and coverage across an array of platforms – each leveraging, complementing and extending the network’s broadcast television coverage. Seven’s free-to-air television coverage of the Games represents the single largest technical and logistical undertaking by an Australian television network and, building on this, Seven is delivering a suite of digital products (including a premium upgrade option), to ensure Australians can have the Olympic Games to hand at all times. It will be the unmissable Olympic Games for all Australians.

Seven’s free streaming products will offer all three television broadcast channels, plus extra selected content, to people living in Australia — all available through the Olympics on 7 app (Android and iOS) and online at www.seven.com.au/Olympics. *

The free product will include a live simulcast of Channel 7, 7TWO and 7mate, as well as selected curated bonus live sports event content from the Olympic Broadcast Service (OBS) channels not already featured on Seven.

VOD highlights, medal tallies, alerts and photo galleries will also be available. The live and free simulcast of Seven’s channels can also be accessed via PLUS7 (on Telstra TV, Apple TV (4th gen), mobile and web), and existing Seven products 7tennis and 7live.com.au.* 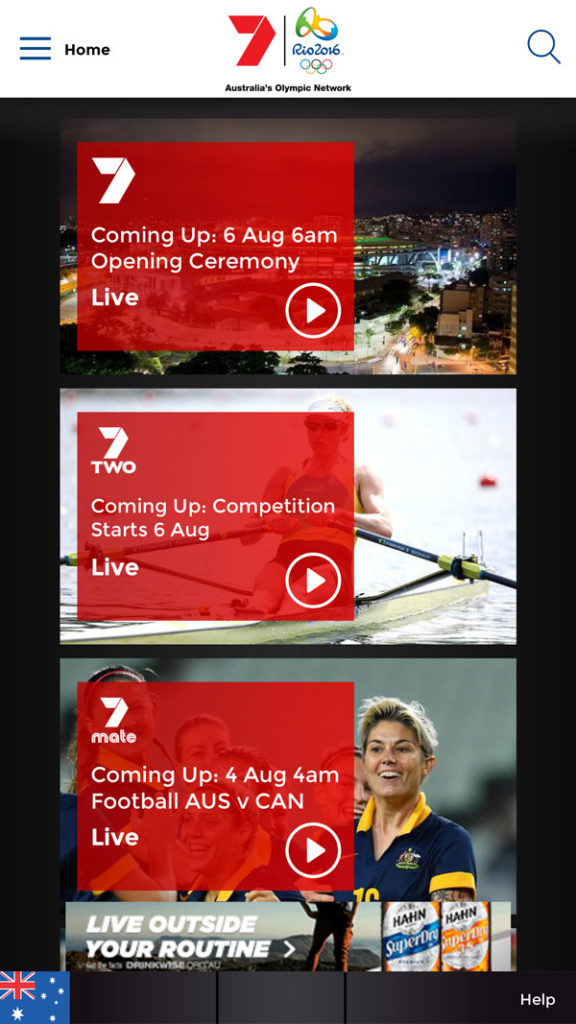 A premium option for $19.95* upgrades the Olympics on 7 app and website to include:

Premium Access to “Olympics on 7” can be purchased at seven.com.au/Olympics/premium/

Kurt Burnette, event director, Olympic Games, and chief revenue officer, Seven West Media, said: “No matter where, no matter when, Australians will see the Olympic Games as never before, accessible to Australia like never before. We will engage with audiences across multiple devices to leverage the extraordinary power and reach of broadcast television.

“Our teams across the country and in Rio will play a part in the delivery and creation of some of the most powerful storytelling there is, the emotions, the highs, the lows — the great moments only the Olympic Games can bring.

“The premium version of our “Olympics on 7” app will have more than 3,000 hours of live event coverage and will be created and delivered by Seven, and made available to all Australians.”

“This is the first time OBS has developed digital products for a Summer Olympic Games and we are really pleased to launch it today to what we hope will be millions of Australian mobile users between now and the Closing Ceremony.”

Seven continues to take the lead in the development of applications for digital television – building on our commitment to new broadcast technologies through our digital network broadcast centre in Melbourne and the construction of a state of the art digital facility in Sydney for our coverage of the Games of the XXXI Olympiad.

Seven’s Olympic Games online presence is built to provide a similar depth of service as the network’s enhanced digital television channels but adds greater interactivity, as well as the ability to navigate deeper into Seven’s content offering.

Yahoo7 will include the latest medal tally, Olympic results and news, and online polling, as well an Olympic program guide for Seven’s coverage. And building on these initiatives, Seven, and its partner Yahoo7, will deliver live streaming and highlights direct from the Games on the PLUS7, 7News and 7Sport apps.

This is the first truly mobile and social Olympic Games. Our objective is simple: nobody needs to miss a single moment of Rio 2016. Across all social channels, the #7Olympics and @7Olympics conversation is open to everyone in Australia.