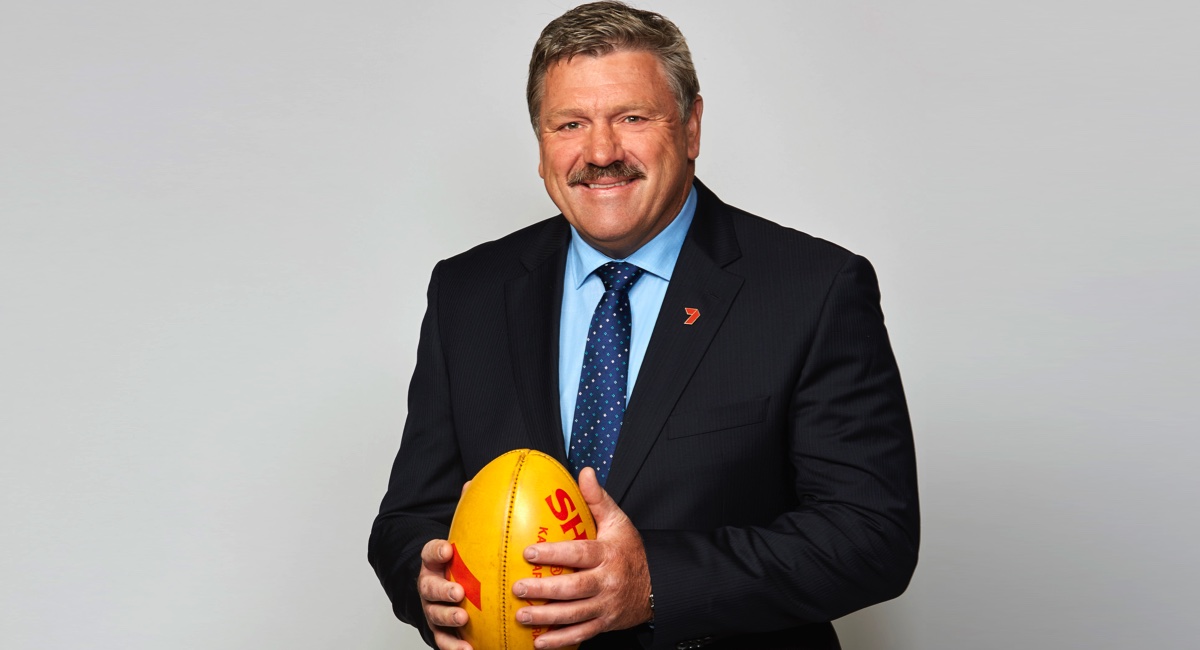 Brian Taylor was facing his biggest seven days of the year when he spoke with Mediaweek at the start of AFL Grand Final week.

Taylor is an AFL commentator for Seven and also is part of the Triple M Melbourne football team. At the start of this year he expanded his role at Seven, taking over some of the duties on Friday and Sunday from Dennis Cometti.

A few days before our interview he was awarded the Lou Richards Medal by the Australian Football Media Association in its annual awards. Taylor told Mediaweek it was a special moment given the time he had spent with Richards across his career.

“I got to spend time with Lou while I was at Collingwood and then during my time with Channel Nine [before Taylor joined Seven]. I spent a lot of time with him before and during the Sunday Footy Show and he passed on a lot of information to me.

“Lou was the forerunner in what we [in the media] all do now. There were a lot of straight callers back in those days, and he was the first guy to take a bit of entertainment licence. That has given others, and me in particular, the chance to impart a little bit of that in what we do as well.”

On Grand Final day Taylor is on call for Seven, but he will slip away for one hour at 12pm to join the Triple M pre-show. “I will be part of their outside broadcast at the MCG.”

Taylor played in the AFL for both Collingwood and Richmond, and he said because Richmond are playing this week it was it bit more special for him. “I definitely have a soft spot for the clubs I played for and I feel very excited for all the Richmond guys.

“All we hope for when it comes to calling the game is that it is close. I will be barracking for the team that is coming second. If Adelaide is four goals down I want them to be one goal down so it becomes an exciting contest.”

Taylor left football when he was just 28 and his first media role was a column for the Sunday Herald Sun. He later joined radio 3UZ working on the breakfast show with a 5.30am start. He then went to late night working from 10pm until midnight.

He noted there were fewer footballers going into media than there are these days. “It was highly unusual then for a player to enter the media. It wasn’t considered a realistic full-time career path. When the opportunity came a player had to show they were capable and would be able to make it a full time job.”

Taylor said he had an idea he’d like to get into the media a couple of years before he stopped playing. “I was a plumber at the time and I knew I didn’t want to do that. There was quite a bit of awkwardness in the last couple of years I played. In those days the club and the coach didn’t want you to do any interviews. I was saying that I wanted to do any interviews I was asked to do. I knew that by doing the interviews people would form an idea if I might make a capable media person.

“I treated every interview I did as a possible job interview. That is what ultimately worked for me.”

Taylor was a regular on Nine’s Sunday Footy Show for a remarkable 14 years. Across those years he also worked at Triple M, went to 3AW and then returned to Triple M.

He explained that working on television calling matches was a very different experience from what radio demanded. “TV is a lot more restrictive and you don’t have as much time as you do on radio. You have to talk less because people see what’s happening. On radio you need to paint the picture as well as you can.”

There was still a place in the game for career journalists, said Taylor, but he noted: “It is certainly tougher for them because of all the footballers moving into media. The electronic media jobs, including those at Seven, seem to be going to more footballers.

“Having a journalism background though is always going to be a way of getting into the football media and I can’t see that changing.”

The explosion of coverage of AFL online has been good and bad for the game he explained. “When I am calling a game of footy I will use the internet to gather information. But you can also find plenty not to like about it at times.”

Taylor preps himself before each round but he also noted he relies heavily on the stats team at Seven – Josh Kay and Dave Frith. “They are both exceptional at what they do – they are brilliant.”

“While they are able to give us updates throughout the game you really need to consider it yourself and have a look a day or two prior. I spend a couple of hours looking at each game, although that is not a lot in comparison to some other callers.

“I feel that’s all I need because I don’t want my commentary to be consumed by stats. Other people who perhaps didn’t play will do that so you don’t want to have two people delivering the same thing.”

Taylor said he is lucky to have worked with many great broadcasters from Bruce McAvaney to Dennis Cometti, Lou Richards and Ted Whitten. Other names he rattled off include Sam Newman, Basil Zempilas, Eddie McGuire, Stephen Quartermain and Sam Kekovich. “There’s not many people I haven’t worked with across the years.”

When asked about personality clashes in the sports world, Taylor replied: “I stay clear of people I don’t get on with. Generally I have got on with everyone I needed to get on with in a work situation. If I have needed to get on with someone professionally then I just find a way to do it regardless of personal thoughts about that person.”

Taylor told Mediaweek he didn’t have too much trouble trying to manage his time effectively in Grand Final week. “It’s really easy…you have a diary and first in is first served. In the media we are like the players – we like to be part of Grand Final week and we do what we can to be involved. That includes some functions and different things for Seven including a Talking Footy special midweek. There is a lot going on and it can be a challenge to fit it all in.”

Taylor added it helps that the end of the season is only days away. “But come early next week and I will be asking myself, ‘What had happened to my life?’ No one wants anything and no one will be ringing me. After just over six months of football it becomes something of a lonely existence.

Although he gets a substantial break from football, because he lives on a farm Taylor has no shortage of chores to keep him busy after the footy finishes.