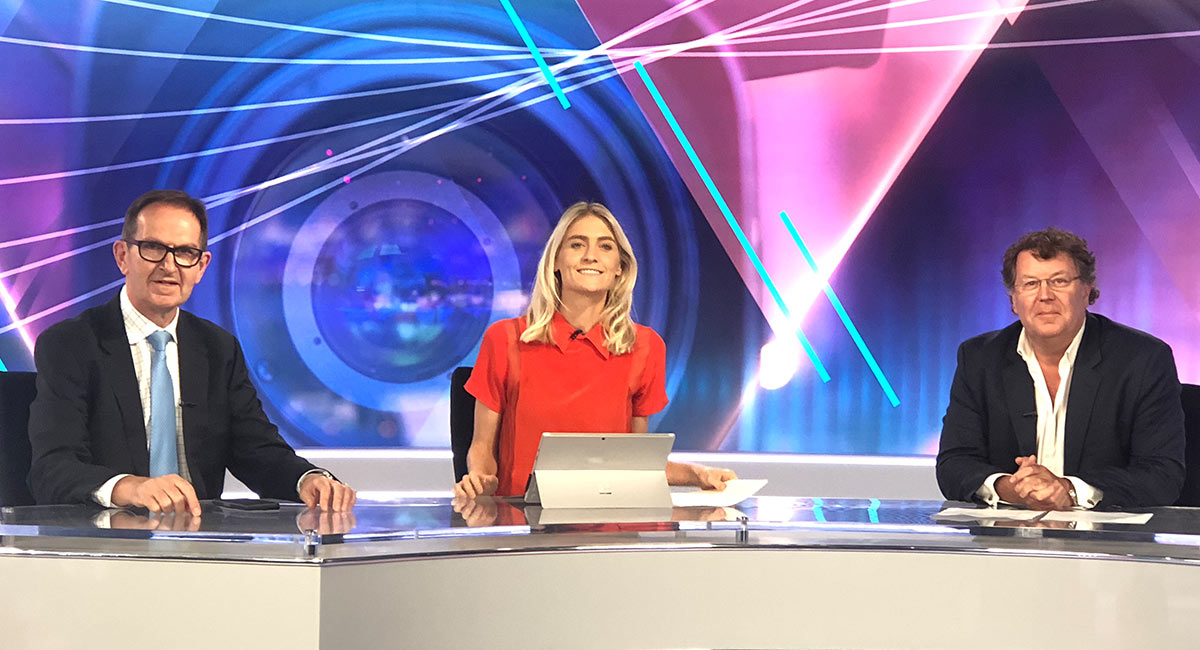 By Ingrid Willinge and James Manning

The chief executive of Southern Cross Austereo Grant Blackley was a guest on the Mediaweek TV segment on Sky News Business this week.

Blackley was asked initially if he was seeing good trading conditions as recent SMI data seemed to suggest.

“Yes, we are, and it is certainly better than the previous six months. There is improvement broadly in the radio sector and that seems to be strengthening on a quarter-by-quarter basis.

“Radio is a very resilient medium. In regional television we are growing at a reasonable clip because of the transition we have made as a Nine affiliate and the continued effort to get the full values of those ratings and revenue.

“We are also seeing our PodcastOne business getting some returns after an initial investment period.”

As to a question about the strength of regional revenues for the business, Blackley reminded viewers: “We are the only media company with assets in both television and radio. Regional is still under-represented with investment from agencies and advertisers.

“We have had a concerted effort to educate the market about the 40% of Australia that is being undercooked. National advertising was up about 12% for the December 2017 half and we are seeing that continue this year.

“Advertisers are starting to see the economic benefit of further investment in regional Australia.”

“We were pleased with the final outcome, which was debated over many years.

“A lot of people are getting their house in order with respect to where they want to be this year. We have a clear view of what we want to do and a clear strategy.

“Just about every media company would be running the numbers on each other. It is certainly not consuming our company and we are very comfortable with the organic development.

“We are acutely aware of media assets that could be attractive to us, but there is no burning desire to commit to them at this point.”

When asked if he thought SCA could be attractive as an acquisition, as a group or broken up, Blackley replied: “We have always been attractive. [Laughs]

“We are the largest radio group in Australia with 84 stations that have been rebranded and it is a scaled and simple business. We have the largest range of local clients out of any media.

“We have very strong television assets as well, affiliated with the Nine Network. Our audio-on-demand development also makes us attractive.

“But we are getting on with business – we are not waiting for any other event.”

Blackley explained how SCA is giving all its radio advertisers extended reach on those digital brands.

SEE ALSO: Brian Gallagher on a Southern Cross Austereo brand on the move

“Regarding PodcastOne, the beauty of the model – and we seem to be alone with this at this point – is that it is original content. We hit 10m downloads in the first 22 weeks from launch in April 2017. It took us 12 weeks to hit the next 10m. It has become investable media because we have sustained growth with 35 original authors, which we expect to grow to over 50 this year.

“The revenue is starting to flow. In the first six months it was in an investment phase. In the US it took about four years to get some scale. In Australia in a few years we might have a $50m market and we want to be a substantial player in that market.”

When asked how the ban on gambling ads during live sport could hurt Southern Cross Austereo, which covers much live sport on TV and radio, Blackley responded:

“The short answer is no.

“We have known about this for some time and have been prepared. We supported the Government on this. The concern we have is that advertisers are confused about the process. We have been very aware of the potential impact on us and we have worked with clients to mitigate wherever we can.”

When asked about Nine getting a deal with Tennis Australia, Blackley replied: “I think Nine should buy the cricket as well.” That’s one wish not getting fulfilled.

He did note however: “We are delighted with the tennis. We have always admired the tennis and Seven has proven that it is a successful launching pad for the start of the year.”