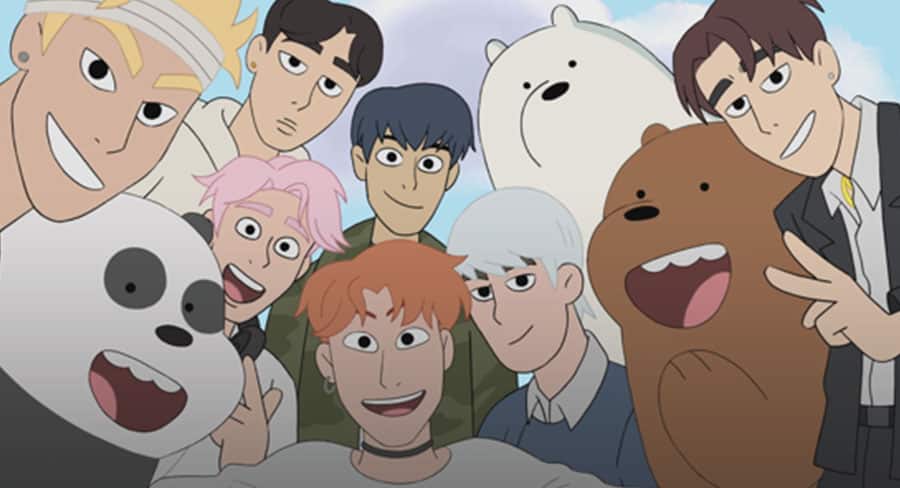 Part one of our interview with Robi Stanton, Vice President & General Manager – Turner Australia, New Zealand and Pacific Territories, covered Cartoon Network’s marketing strategy in bringing international shows to an Australian market. In Part two of Mediaweek’s conversation with Stanton, we will be taking an up-close look at the most recent campaign for Cartoon Network’s We Bare Bears.

We Bare Bears is an animated series about the adventures of three brother bears in civilised society, which Stanton describes as, “We Bare Bears is a huge show for us. There’s something so cute but also so relatable about the bear-bros and everyone has a favourite. Mine is Ice Bear. He probably talks a little less than me but he’s super talented and uber cool.”

We Bare Bears has developed a bear sized footprint globally for Cartoon Network with a baby bear spinoff and a TV movie scheduled for 2020. Also in Australia, We Bare Bears has a partnership with retailer Miniso who sells a varied line of popular bear merchandise.  In 2018, Cartoon Network estimated that We Bare Bears engaged its fans through more than 200 million touchpoints in Asia Pacific. The show has also recently held promotional campaigns in Singapore with Fraser’s Malls, South Korea with professional baseball team the Doosan Bears, and Temuera Morrison voiced the character Grizzly for Cartoon Network New Zealand to celebrate Maori Week. 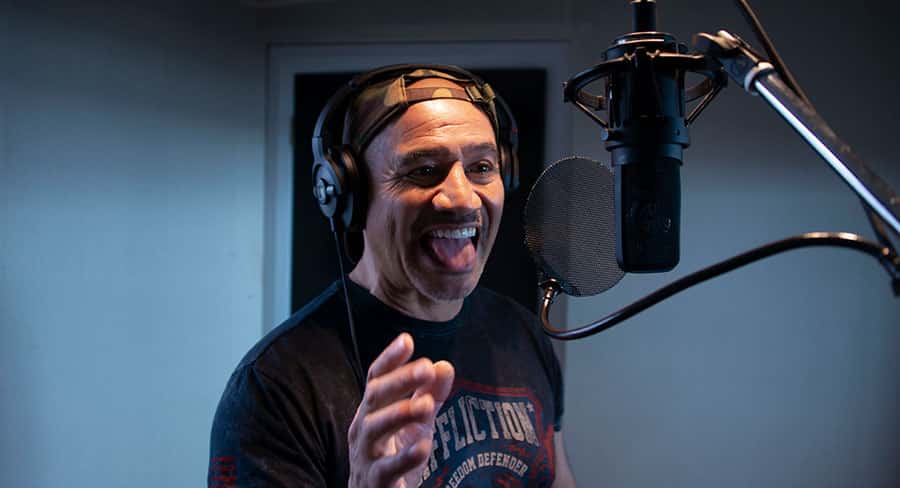 Stanton explains that series has engaged with international audiences due to the likeable and relatable nature of the content that resonates with both kids and adults,

“The We Bare Bears are very likeable and relatable. The bears are three unique characters trying to find their place in the world and we think a lot of people can relate to that on a personal level. The series juxtaposes a somewhat mature sense of humour which relates to both kids and adults. Australians have a similar sense of humour and they don’t take themselves too seriously either.

“Fans also respond really well to the diversity aspect of the show. The series takes place in the Bay Area around San Francisco which is very multicultural. The show also has a high ‘cuteness’ factor since Daniel, the creator, has a soft spot for the Japanese ‘kawaii’ or cute aesthetic which you can see has influenced the show.”

To continue the promotion of the animated series Cartoon Network recently held a fan tour of Australia and New Zealand to promote the show that started with a visit to the Opera House, Harbour Bridge, Pitt St Mall, China Town, and Bondi Beach. Stanton says that a lot of planning went into the tour to create a marketing campaign that was true to the brand, 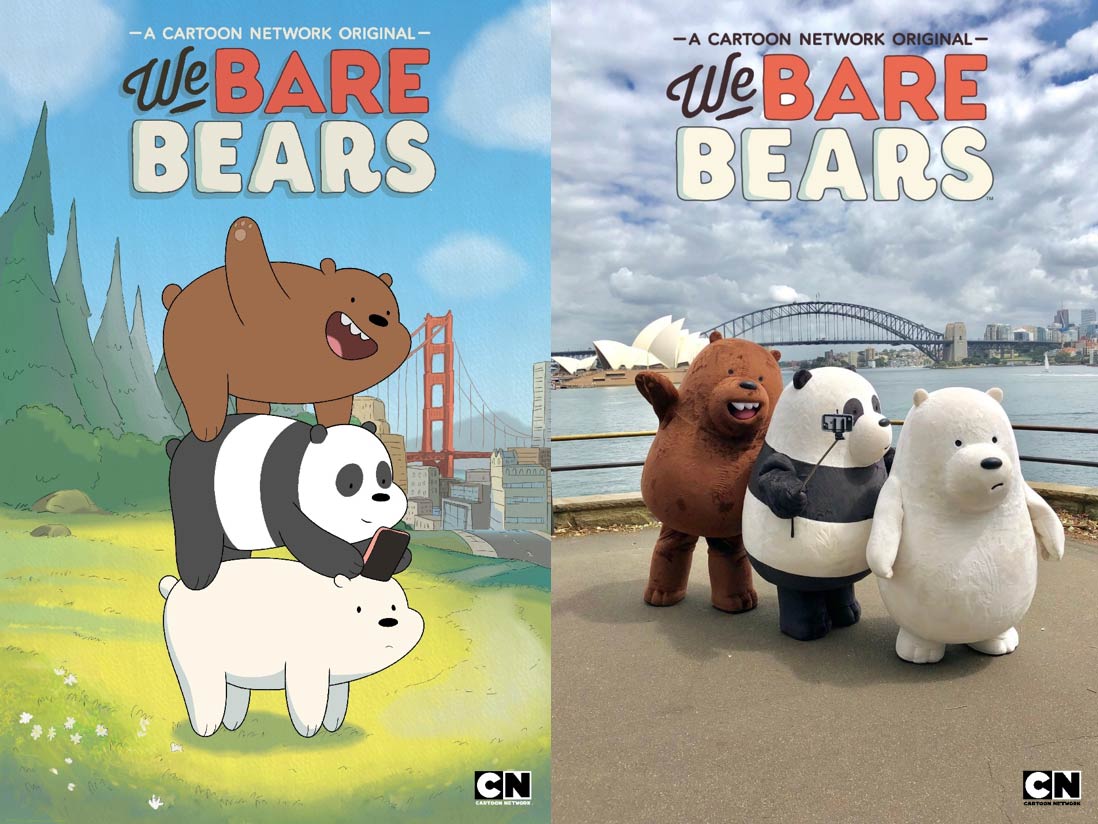 “A lot of planning went in to their tour of Australia and New Zealand. It was important to create opportunities for fans to engage with the bears in person. We also looked at their characteristics and created a campaign that stayed true to them. The bears are always looking to make friends, so spreading bear-hugs and meeting new people is completely on-brand for the show and a “fun” thing to do which is core to the Cartoon Network brand DNA.

“We wanted to take the bears to places that are frequently visited by tourists, as that is essentially what they are. They are having so much fun visiting iconic locations such as the Harbour Bridge, which made them feel right at home as it reminded them on the Golden Gate Bridge. The bears are obsessed with food so we had to factor that in to the tour also by creating a life-size food truck.” 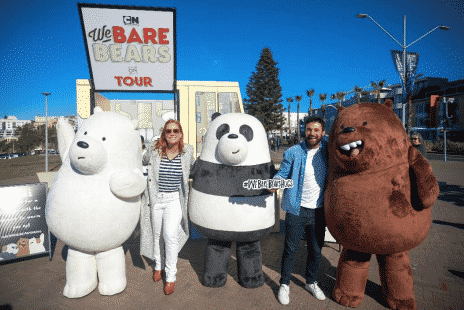 This isn’t the first time that Cartoon Network Australia has used a campaign like this to drive fandom, Stanton explains how Cartoon Network tries to use technology to connect with its fanbase,

“At Cartoon Network we continuously look at ways to drive fandom. We know that fans love to engage with our brands in real life, so on the ground events are a very important part of the way we connect with them. In the past we have run multiple OTG campaigns, of which our Ben 10 AR experience is a good example. We used technology to enable fans to do what they have always imagined being able to do. To morph into their favourite Ben 10 alien and brought to life on a big screen where they could use their superpowers. This activation toured the country and kids loved being able to play their favourite hero.

“A few years ago we created the world’s largest skill tester – a 10×10 metre contraption filled with toys where kids controlled the joystick and parents were the claw!”

This builds on the influencer campaigns that are a heavy component of the Cartoon Network strategy. In May this year, We Bare Bears announced a partnership with K-pop group Monsta X which saw the members voice characters in the series. This continues a string of celebrity partnerships that include NBA stars Charles Barkley, Damian Lillard, Kyrie Irving and Paul George, and rapper T-Pain (who has a tattoo of the We Care Bears character Panda). Stanton says that it is important to connect with their audiences in different ways, and a partnership allows both brands that are involved to widen their appeal,

“It is important to us to engage with our audience in unique and creative ways. Brand collaboration and partnerships where there is a shared or overlapping fan base is an incredibly powerful way for both brands to bring joy to the fans of both brands and to widen the appeal of both brands respectively.

“We know a lot of the fans of both We Bare Bears and Monsta X cross over so it was really great to make this happen. The original idea actually came from a fan on Twitter and the creator, Daniel Chong, loved the idea so we approached Monsta X who themselves are fans of the series, so it all aligned. We had a similar experience when we engaged with T-Pain, Daniel Chong discovered that he had a Panda Bear tattoo on his arm and thought it would be brilliant to have T-Pain feature in an episode.”

Along with the tour of Australia, Cartoon Network has also created an online platform for fans to vote on the next destination of the We Bare Bears Tour at hugstour.cartoonnetwork.co.nz This is accompanied by an APAC “We’ll be There” journey official Facebook page allows fans to follow the Bears’ journey at We Bare Bears Community Page. Stanton says that it is important to provide their fans different ways to engage with the brand and to communicate what they want from the show,

“The response has been overwhelming. We understand that our fans use different platforms to engage with our brands which is why we used social avenues to engage further. Our campaign allows fans to determine the journey of their tour and also provides iconic meeting places for fans to have a bear hug with the adorable bear brothers.

“When you are able to engage your fans so deeply and immerse yourself into their everyday life, we believe that is the ultimate measure of a successful campaign which is really based on a broader strategy around ‘total consumption’ of our franchises and brands.”

Staton says that Cartoon Network is aware that they need to be where their fans are both online and offline and the important part that real-life experiences play especially for such a young audience,

“To drive fandom we need to make sure we are everywhere our fans are, whether that’s online, on social, on-air or on the ground. With kids brands in particular we know that real life experiences are very important as this grows connections with the brands they love. We’ve noticed while touring the We Bare Bears that they receive a very positive response from fans as the mascots are very soft and cuddly and fans can’t seem to keep their hands off them.

“That said, while the real life experience may be the highlight of a campaign, it is never done in isolation and we always take a 360 approach across digital, social and/or on-air which not only deepens the engagement but also amplifies it to a significantly larger fanbase.”

While most of the content on Cartoon Network Australia comes from its various studios all over the world, Stanton says that the local offices are given a lot of freedom when promoting the content to domestic audiences.

“Although our shows are created by our various studios, which are located in different countries across the world, we have a very localised approach to marketing. Each market is able to do their own campaigns as long as it’s on brand for both the franchise and the channel. Each year we decide which shows drive fandom and we design a campaign around it – it’s a lot of fun coming up with different ideas. With We Bare Bears we knew we needed to play into the cuteness factor of the show – who doesn’t want a bear hug?!”