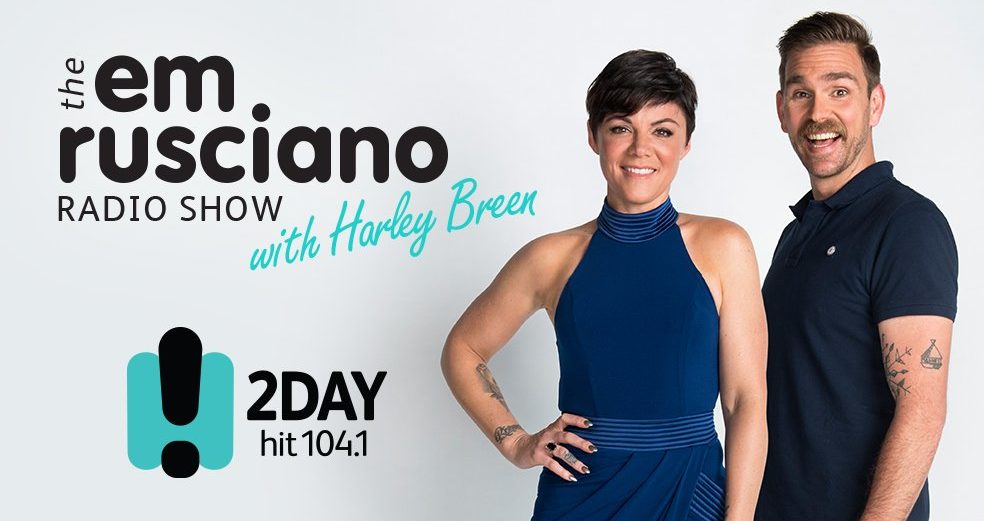 6am: Bang on 6am the show starts. Welcome from Rusciano and Breen. Rusciano has a story about getting stuck in the basement on day one. Reminds us of Marty Sheargold‘s day one at Triple M breakfast in Sydney when he was stuck in a lift.

First talkback topic is the Hemsworth brothers, with the hosts asking callers to name their favourite and why. Callers get a ticket to Luna Park. First caller Tamara nominates Chris Hemsworth. The show then takes a call from Christian Hull who Rusciano says, for those new to the show (!), is the show’s video producer and he gives the results of a Twitter poll on the Hemsworths the show started yesterday.

First joke about Breen not getting equal billing in show title.

Rusciano may not be in the market, but she was in Sydney for publicity last week and she took part in the Sydney Women’s March on Saturday.

No promos for what is coming up in the show for the rest of the morning, apart from plugs for Ed Sheeran tickets.

Just on 6.30am there is a lengthy segment about Trump‘s first weekend in Washington and some highlights from the Washington women’s march.

Rusciano talks about Shannon Noll‘s troubles in Adelaide recently. Commenting on the nightclub involved, Rusciano says: “If that is your choice of occupation ladies…terrific.”

Some funny discussion about Breen’s partner who is three weeks away from giving birth with some insights from Rusciano about how women’s nipples change after the arrival of a child.

7am: After the 7am news, the hosts congratulate each other for still being on air after 60 minutes of their new show.

Rusciano warns the listeners she gets to choose the first song at this time every day. Her choice on day one – Mariah Carey and “Emotions”.

A weather check has Rusciano giving a Sydney forecast and telling listeners in the west, “It would suck to be you because it’s going to be about 1,000 degrees.”

After a chat about Kylie Minogue‘s impending marriage, discussion turns to our Kylie adopting her husband’s surname. “I didn’t take my husband’s name because my name is better,” explains Rusciano.

First mention of a guest for show one – Tracey Spicer on the phone to talk about the women’s march in Sydney.

Just before 8am a caller rings in support of the women’s march and reveals she has never owned an iron in her life. “Why would you ever iron a man’s shirt?”

Rusciano reveals she will stop wearing G-strings, prompting a caller to reveal they are giving up Spanxs and the Brazilian. “Are you going 70s bush?” asks Breen.

8am: Time for their first radio competition. Contestants needs to answer each question with the letter B for the chance to get $1,000. Chantal gets just three correct for a $300 win.

Rusciano remembers what it was like for parents back in the 80s when life was more laidback.

Best calls of the morning come at 8.30am from people “guilty” of 80s parenting.

Lots of calls from people revealing they have been loving the new show. “You are now on the standby list,” Breen tells each of them.

Just before the show ends, Rusciano reveals that it is Breen’s birthday. Breen gets a meat platter for his 37th birthday.

“The first show and we didn’t manage to blow anything up!” says Breen.

Commentary from people on Twitter is read out at the end of the show: “Another 2Day FM morning failure” comments one listener. Rusciano reveals they now have close to 300 followers on Twitter, then notes that Kyle and Jackie O have over half a million.

“There has been some good and some bad,” said Rusciano.

Was it any good? This is the first new 2Day FM breakfast show since November 9, 2015. SCA will be hoping there won’t be another new one for quite some time. If day one is any guide the show is targeting women listeners and could be pretty much a celebrity-free zone.

The reigning FM champs Kyle and Jackie O commented briefly on the departure of Rove and Sam. Even Jackie admitted surprise Kyle didn’t go harder on the departure of his archnemesis. (K&J didn’t finish until 9.40am today – why has no other Sydney show ever tried to take them on staying on air well after 9am too?)

Sandiland’s advice for his competitor and former employer today was maybe they should sell the Sydney FM station! He couldn’t resist a mention of how much Rove seems to be getting paid now for one hour of radio a day.

Em Rusciano has a massive job ahead of her, but there were certainly glimpses this morning of how she and Breen could build a radio show. Giving listeners a reason to switch over will be the biggest challenge.

SCA chief executive Grant Blackley talked about hiring breakfast people you could put on a billboard when he arrived. It might take some time though for Em Rusciano to mean much to Sydneysiders when she appears on billboards.