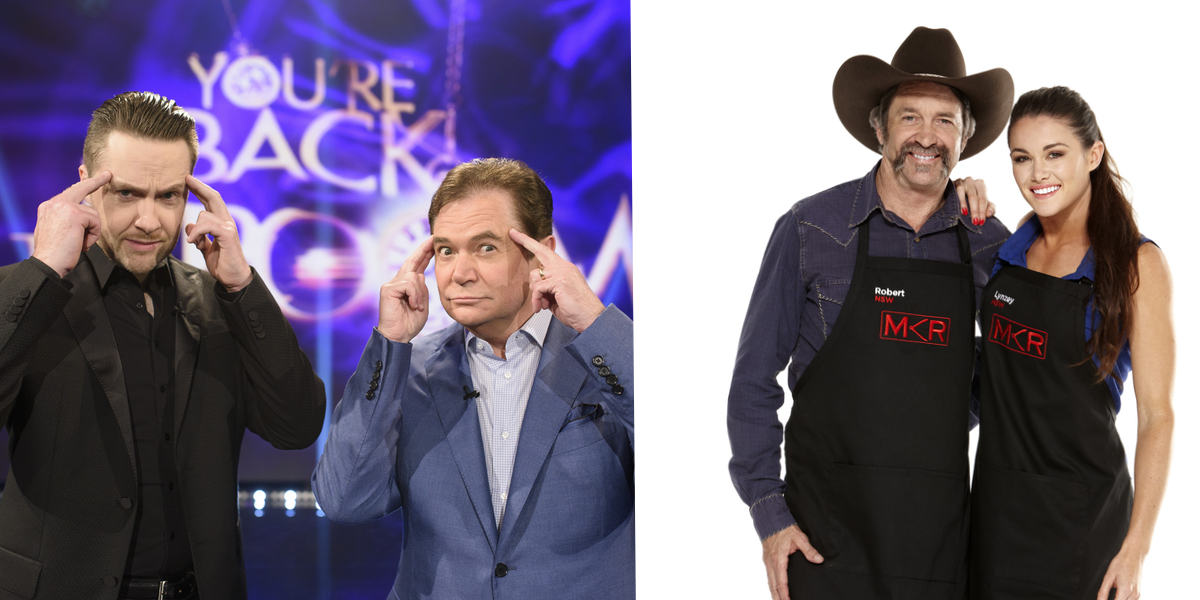 For the first time in the competition’s history, former MKR teams will return to Seven’s Kitchen HQ to judge contestants’ dishes in an upcoming cook-off.
Four of the lowest scoring teams from the Wednesday night (March 30) challenge will cook for the best of the best of MKR alumni on Sunday, April 3 at 7pm.
The program airs not just on any Sunday – the special Seven episode screens on the first night of the remaining 34 weeks of survey. That is also the night Nine has chosen to launch its new Daryl Somers’ series, You’re Back In The Room.
My Kitchen Rules has already grabbed a number of scalps this year – Australia’s Got Talent and Reno Rumble among them, could Daryl Somers be another one?

Seven has explained the format of the MKR special edition:
Two teams will cook main and two teams will cook dessert. They will have 60 minutes to impress the toughest critics to date with their signature dish.
The alumni, along with the judges Pete Evans and Manu Feildel, will decide who the lowest two teams are.

It’s an emotional return for many including MKR 2013 winners Dan and Steph Mulheron who now own and operate their own café and catering business in Hervey Bay.
“Walking through Kitchen Headquarter’s doors, I’m not going to lie, it’s very emotional. This is where our dreams started and came true,” said Steph.
2015 MKR winner Steve Flood agreed saying kitchen HQ is “a place where some pretty amazing things can happen.”

Seven’s programming move sees the special edition of MKR going head-to-head with the launch of Nine’s new series You’re Back In The Room.

Nine has detailed what to expect from their new format:
Showbiz legend Daryl Somers returns to television to host an uproarious new entertainment program when You’re Back in the Room premieres Sunday, April 3, at 7pm on Channel Nine.
Contestants in this truly hypnotic game show will have the opportunity to win big, but pocketing the cash will be anything but easy.
Standing between them and their fortune will be their own subconscious thoughts, because in You’re Back in the Room each contestant will be hypnotised by world-renowned hypnotist, Keith Barry.
Barry will put them through a series of crazy games where tasks need to be completed in order to win a maximum cash prize of $20,000 for their team.
After he has messed with their subconscious is when the fun really begins. Mayhem ensues as the contestants lose all inhibitions, making for the funniest television you’ll see all year.
The cash pot accumulates throughout the show before the contestants attempt to win as much as possible in a fast-paced final where they’ll have to work harder than ever to overcome their hypnotic hindrances.
You’re Back in the Room is a FremantleMedia Australia production of a BBC Worldwide format for the Nine Network.