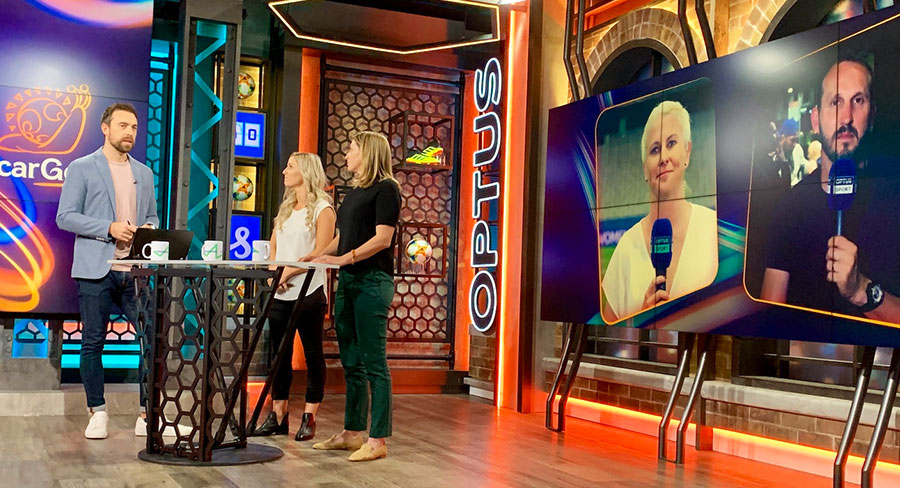 The day didn’t go as the former players and staff at Optus Sport would have hoped.

It’s just after 4.30am on a cold Sydney winter morning.

Inside the Optus Sport bunker the pre-game show before the Australia v Norway round of 16 Women’s World Cup game is under way from the recently completed new studio set.

Recently arrived Optus vice president of product development, television and content Clive Dickens is in the complex early as he is when there is a major live event underway.

Dickens normally sits at a desk in the open-plan Optus Sport office, this Sunday morning though he is in the “war room” sitting alongside Corin Dimopoulos, Optus’ head of TV and content, as they monitor the feeds from France and watch just how many Optus Sport subscribers are logging on for the early start. If fans sleep in, no worry. Customers can watch on demand from the start whenever they wish, or watch the compressed mini-match after Optus Sport post the edited highlights soon after the final whistle.

But first, let’s write about the end at the beginning.

The day didn’t go as the former players and staff at Optus Sport would have hoped. After a gruelling 120 minutes match, Australia and Norway are still locked at 1-1. It’s left to a penalty shoot-out to decide the game and it all goes horribly wrong for Australia.

What should have been a win for the Matildas turns into their poorest Women’s World Cup performance since 2003.

The result dampens the confident vibe at the Optus Sport offices until that point. Even the staffer who was exposed for supporting a Norway win looks gutted.

When I first arrive at the Optus Sport complex, former Matilda-turned-Optus Sport pundit Heather Garriock asks, “Are you nervous?” Turns out I should have been.

The Optus Sport team spread across a floor in one of the group of buildings making up the Optus complex on the edge of Sydney’s lower north shore. 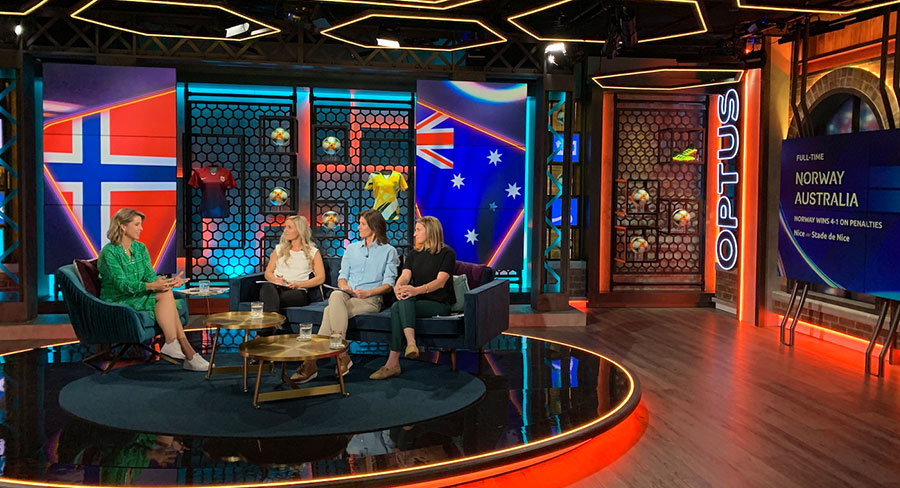 The Optus Sport coverage is powered by former greats of the game. Hosting coverage on the day I visit is Amy Duggan, who is joined on the couch by Heather Garriock, Cheryl Salisbury and Amy Chapman.

Optus has also invested in basing a team in France who cover the matches – Alicia Ferguson, Mark Schwarzer, Jules Breach and Niav Owens. Although as Dickens explains, the tech needed for live crosses now anywhere in the world is considerably cheaper than it once was.

The busiest room during the match is where rows of content specialists sit filing stories, social media pieces and video clips before, during and after. Dickens explains this has been one of the recent changes at the business, growing the online content. Optus Sport editor David Weiner watches the game on a big screen adjacent to the TV studio, trying to manage both messages on his laptop and the match.

The Sunday result aside, Optus Sport has been riding a football wave since the Premier League got underway in August 2018 after the bungled World Cup coverage this time last year.

Since then the sports streaming service has sorted out its issues and has had a good year of presenting many games of football – including just under 400 Premier League clashes.

Optus holds the master rights for the Premier League and UEFA competitions and its sub-licences FIFA World Cup games from SBS.

Optus Sport doesn’t have a need to reveal viewer numbers, yet, but after the European action in early May it reported Optus Sport’s activated customer numbers soar 50% year-on-year. Optus Sport also reported its biggest ever week, with unique weekly viewers up +130% in a recent week compared to the same week last season.

That growth is coming partly from customers signing up to mobile or internet plans with a bonus Optus Sport subscription a key attraction.

Optus reported 11.2m mobile and broadband customers in Australia earlier this year. That’s an impressive number, but the total customer base of parent company Singtel is over 600m, with just under 400m of them in India.

While Australia being drummed out of the Women’s World Cup won’t boost audiences, people taking the Optus Sport feed (the only place to see every match of the tournament) will be interested in the thrilling football still to come from the remaining countries.

Dickens is guarded about what might be next for Optus Sport. He admits the telco-turned sports broadcaster is talking to everyone about possible rights acquisitions. Expect things other than football to be on the menu, eventually.