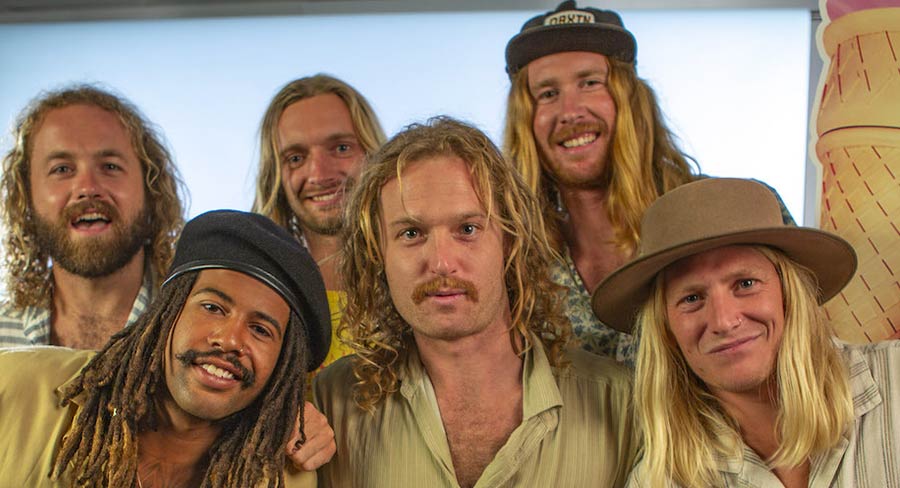 Local heroes Ocean Alley topped the Hottest 100 poll with their song Confidence securing the majority of the record breaking 2,758,584 votes.

We always knew 2018 was gonna be a big one for Ocean Alley. The Sydney six-piece built up a solid fanbase over the 12 months prior, touring their blistering live show after claiming their first Hottest 100 entry with The Comedown at #38 in 2017. Then in February 2018, while gearing up for the release of their second album Chiaroscuro, they dropped a slinky little number called Confidence on the nation. Almost a year later, proving its mass appeal and lasting power, it topped the poll as the fave song in the 2018 Hottest 100.

triple j’s music director Nick Findlay says of the song: “Dripping with a level of sun-drenched soul that’s straight out of a 70s surf flick, Confidence proved to be such an earworm that it transcended the usual garage-ska scene and straight into the hearts of the nation. It’s a song that led the votes from day one of polling and never stopped its huge trajectory to success. Confidence is Ocean Alley at their finest and a well-deserved jam to take out the #1 spot in the 2018 Hottest 100.”

• Ocean Alley’s Confidence marks the 15th Aussie song to hit #1 in the Hottest 100
• Ocean Alley placed with 4 songs, followed by Billie Eilish, Hockey Dad, RÜFÜS DU SOL, Post Malone and DMA’S at 3 songs each
• Ocean Alley bookend the countdown with #1 Confidence and #100 with Bones. That’s the second time ever, after Powderfinger did it in 1999 with #1 These Days and #100 Passenger
• 65 songs are from Australian artists and 21 artists appear in a Hottest 100 for the very first time
• 31 artists were first heard on triple j Unearthed and 6 songs were uploaded to triple j Unearthed in 2018
• 67 songs are from male artists, 22 from female artists, 8 from acts including both male and female artists, and 3 from artists who identify as Non-Binary or Genderqueer
• February was the hottest month with 14 songs released in that month, including 3 from Ocean Alley!
• 2 artists in the countdown had back-to-back entries: RÜFÜS DU SOL (#22 Underwater, #23 Treat You Better) and Vance Joy (#53 We’re Going Home, #54 Saturday Sun)
• Both Peking Duk and DMA’S celebrate their 5th consecutive appearance in a countdown, while Amy Shark, Cub Sport, Tash Sultana, Thundamentals, Vera Blue and Drake appear for a 3rd consecutive year
• Hilltop Hoods now have 19 songs in a Hottest 100, catching up with record holders Powderfinger and Foo Fighters (22 each)
• The shortest song is Up In The Clouds by Skegss (2:30min) and the longest song is Underwater by RÜFÜS DU SOL (5:49min)
• Music truly came from all over Australia, with regional Hottest 100 hometowns including Byron Bay, Forster, Forbes, Windang, Castlemaine, Blue Mountains, Arnhem Land, Delungra, Newcastle, Gympie and Menangle