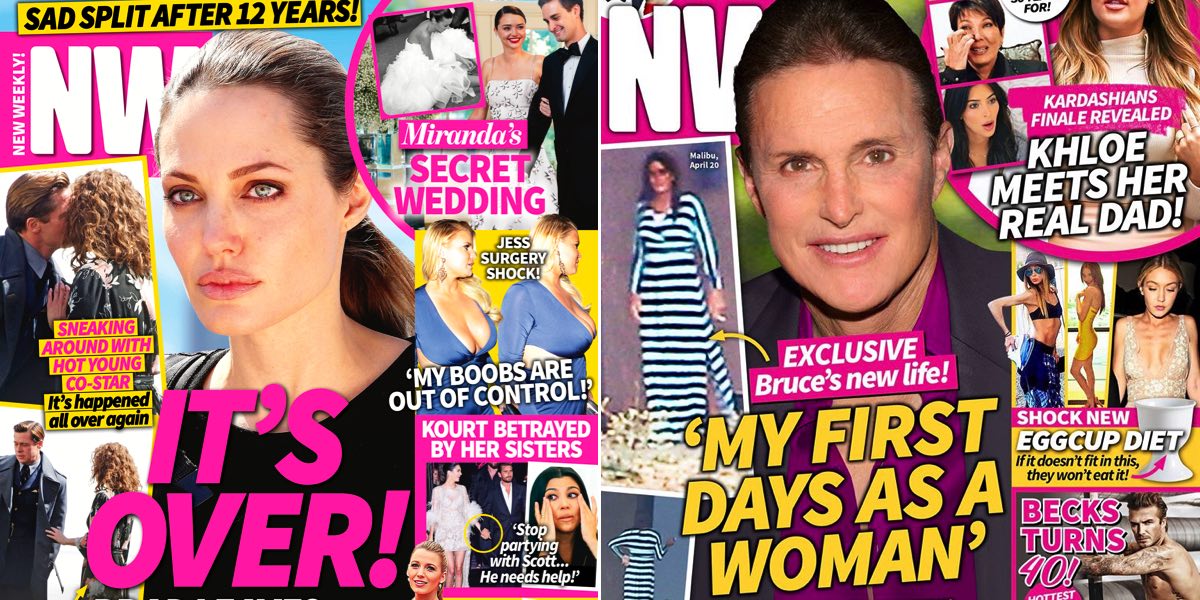 There is still a market for celebrity gossip titles, says editor Mark Brandon

Move over, Kylie Jenner and Gigi Hadid, the old cover stars of weekly entertainment magazines Brad Pitt, Angelina Jolie and Jennifer Aniston are making a comeback. At least this is the case for the audience of Bauer Media’s NW magazine.

A cover featuring Jolie in May 2016 with the cover line “It’s over” has been NW’s biggest-selling issue this year. Editor Mark Brandon described this as “the most surprising comeback of the year”.

“No one would consider putting them on the cover,” Brandon told Mediaweek, “but in May we decided there is still a lot of emotional investment in these guys.

“We’ve done more covers on them with more success. Other mags have followed too. It’s exciting when some old faces come back.” Bauer Media is perhaps the biggest publisher of weekly entertainment titles in Australia. It has four magazines coming out each week including NW, Woman’s Day, OK! and TV Week.

Most of the competition in the market comes internally, but two notable forces come from another publisher, Pacific Magazines’ New Idea and Who.

Woman’s Day and New Idea are the third and fourth most-read on-stand magazines in Australia. Despite readership falls of over 10% each, more than 1.6 million people read each title. When compared to this, NW had a readership of 294,000 in the emma figures for 12 months to June 2016. However, Brandon is unfazed by this. He said that NW falls into a different category to the other two.

Brandon said: “We fall in the celebrity category, which is NW, Who magazine and OK! We group ourselves together because we are pretty much 100% celebrity titles and have similar price points, whereas Woman’s Day and New Idea are significantly cheaper than us.”

In the digital age, NW content is not only facing competition from other local entertainment print titles, but also celebrity content published by entertainment brands around the world, blogs and people on social media.

“Our social audience is organic,” Brandon stated. “We don’t pay to boost posts. We don’t pay to get our message out there. Everyone who engages with NW content is choosing to have it in their feed – that is super important. I know that our competitors pay for their Facebook posts because I see them come up in my feed even though I don’t follow them. They comes up as sponsored posts.”

Pacific Magazines closed down the print edition of its weekly celebrity title Famous earlier this year and kept it alive as a digital-only property.

Asked if he still considers Famous Live as competition, Brandon said, “Not really. I consider them as one of the many websites out there that cater to celebrity news.

“NW is in a very different league. We do have print at heart, but we also have a very strong social and digital offering as well. This makes uo the whole package.

“There is a lot of stuff being pumped out on the internet. It’s just quickly pumped and dumped, whereas in a magazine it is very carefully edited. We are thinking about what the readers want. We are also trying to give them a few surprises.”

One of the most common criticisms faced by celebrity titles is that the stories published by them are untrue.

“Someone asked me that the other day as well. They asked what’s your strike rate of getting things right and what’s your strike rate of getting things wrong. I said, ‘It’s kind of the same as real life when people are talking about their friends or giving gossip about someone that they know. Sometimes it is right, and sometimes it turns out not to be right’.

“The nature of our magazine, and our readers know this, is that we are a gossip magazine,” Brandon said.

The NW point of difference to everything that is out there in the local and global market, Brandon said, is that it seeks to speak to people who are young at heart and not young by age. “Our brand is about being shocking, surprising and entertaining,” he said. “We don’t report on celebrity news. We are a celebrity gossip magazine. We are the fun cheeky best friend in the category, rather than Who, which is the older, more serious friend in the group.”