Lachlan Murdoch’s Nova Entertainment generated an outstanding financial performance during calendar 2015, according to Bob Peters from Global Media Analysis.
The metropolitan radio broadcaster realised a 39.5% leap in adjusted operating profits last year as a result of an impressive 13.1% increase in advertising revenues significantly outpacing a lesser 5.6% rise in adjusted operating expenses, as shown in Table One.
Nova’s above-average increase in advertising revenues to $187 million was substantially better than the 5% rise in total metro radio advertising revenues over the same period and it represented the best revenue growth performance on a like-for-like basis of any metro radio group last calendar year.

Much of Nova’s sizeable revenue increase in 2015 is believed to have been the result of the group’s successful monetisation of both the ratings surges at its two smoothfm branded stations in Sydney and Melbourne, which over the past three years have grown their combined audiences by two-thirds, and also the continuing popularity of the group’s flagship five station Nova branded network, which in CY 2015 retained its position as the #1 commercial metro radio network, as measured by total listeners, despite a modest 3.3% decline in average listener numbers at the network during the year.

Last year’s exceptional earnings improvement enabled Nova, for the first time, to become metro radio’s second most profitable group, as measured by both adjusted earnings before interest tax and depreciation (EBITDA) of $62 million and adjusted EBITDA profit margins of 33.0%, thereby displacing its long-time arch-rival Austereo, who up until 2013 had been the industry’s perennial top profit performer, as shown in chart five below.
During the year, Nova managed to limit increases in its adjusted operating expenses to only 5.6%, which gave it a cost structure almost identical to that of the Australian Radio Network (ARN), but more than 23% lower than that of Austereo, as shown in chart four.

Critical to its cost containment success was Nova’s ability to limit employee benefit expenses, which accounted for just over half of all adjusted operating costs in the year, to a modest 4.9% rise. On the other hand, production costs and advertising expenses rose by 16.0% and 14.5% respectively, probably reflecting the intense and on-going competition between the three major FM broadcasting groups for both listeners and advertisers.

In order to facilitate an as accurate as possible like-for-like financial comparison between the three commercial FM radio groups, Global Media Analysis (GMA) has used its best endeavours to adjust, where necessary, Nova’s reported financial results to bring them in to line with those of ARN and Austereo.
Whereas the radio operations of ARN and Austereo are each owned by pubic companies whose shares are listed on the Australian Securities Exchange and whose subsidiary operations are therefore subject to certain statutory financial reporting requirements imposed on their respective parent companies, the ultimate owner of Nova Entertainment is a private corporate entity, which in certain instances may be subject to financial reporting requirements which differ from those of Nova’s two major competitors. 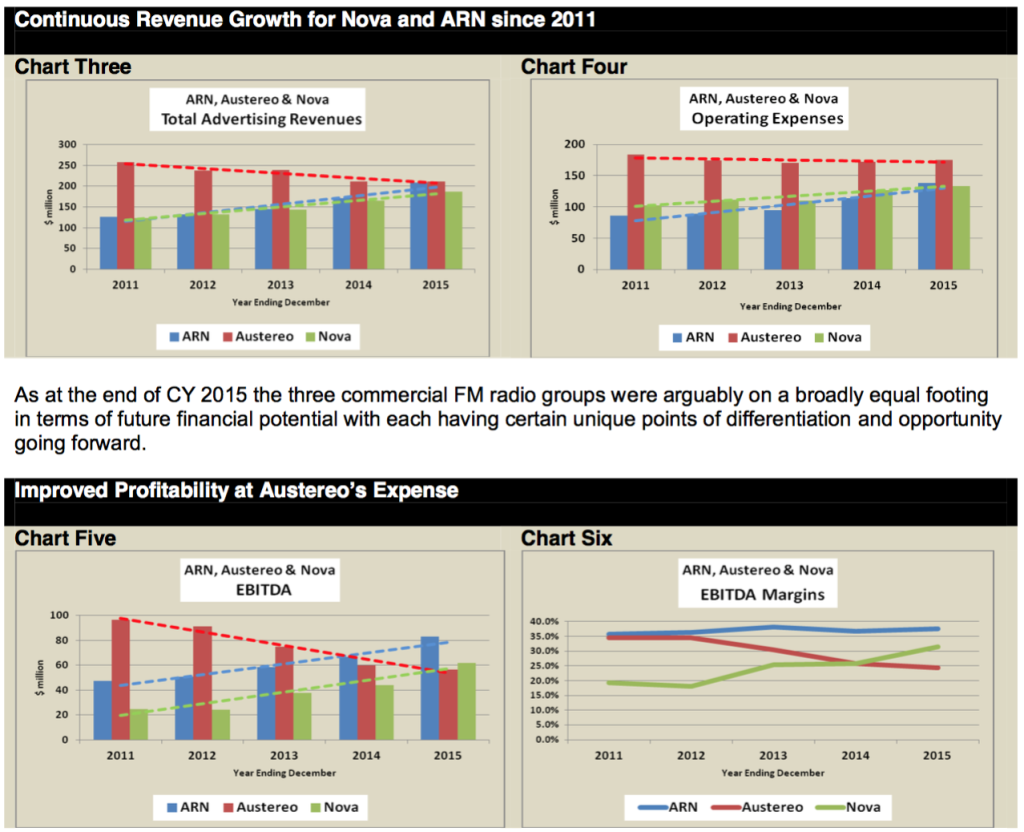 Perhaps as a precursor to a possible future sale or merger, a corporate restructuring occurred within the Nova Entertainment group of companies on 1 January 2015 when the operating assets of the group were transferred in to a new corporate entity at a price which appeared to represent an enterprise value (comprising equity plus external debt) of $420 million.
That valuation may reflect the owner’s starting point in any negotiations to either sell or merge the Nova group at some time in the near future as part of a much-anticipated consolidation within the local media industry.
Source: Global Media Analyis