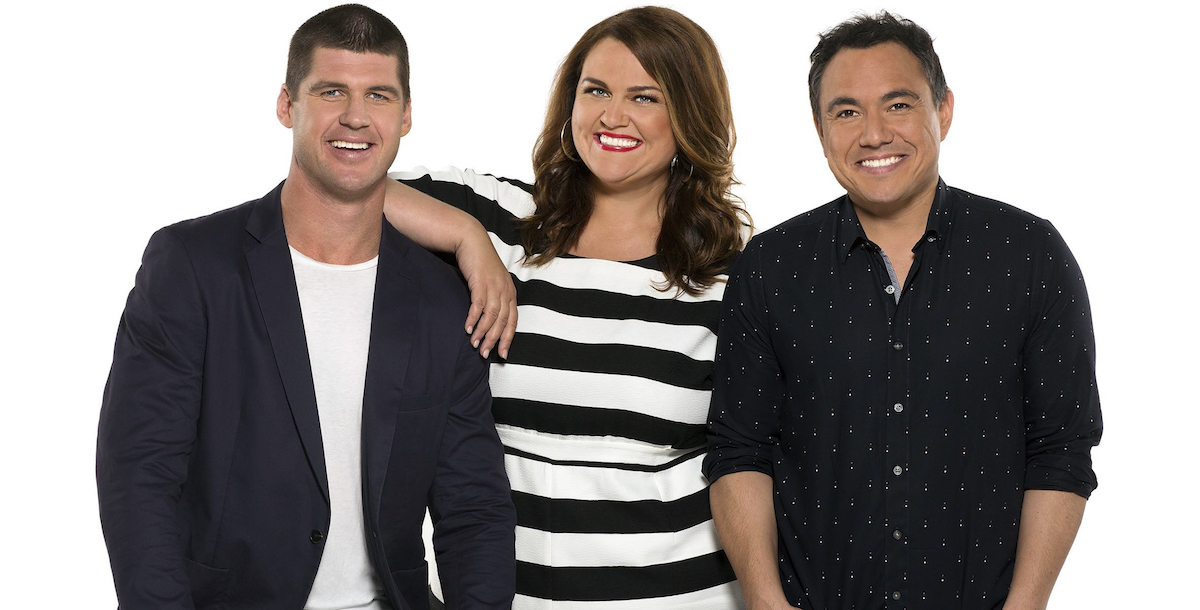 Nova Entertainment has revealed the lineup of its new breakfast show at Nova 100. The new trio will replace Meshel Laurie, who moves to KIIS 101.1, and Tommy Little. The new team won’t be starting this year though – the show will debut in January 2016 at the start of the first radio survey of the new year.
This is how Nova made the announcement:

After much speculation Nova 100 is delighted to announce that AFL great Jonathan Brown and talented comedian Sam Pang will be joining the amazing Chrissie Swan in 2016. These three passionate and iconic personalities will deliver a daily breakfast show that lives and breathes what’s important to Melbourne.
Louise Higgins, Nova Entertainment COO said, “We have made a bold move in creating a show that has a real point of difference, is distinctly Melbourne and will appeal to a broader demographic ensuring its success with all Melbourne audiences.”
Nova 100’s new breakfast show will be topical, entertaining and above all funny! These distinct personalities will bring their own very different points of view on everything the city wants to talk about.
Chrissie Swan said, “I’m a huge fan of Sam Pang and I’m really excited to be working with him and Browny – what’s not to love? I’m not too across the footy but Browny loves The Bachelor so we’ll be fine!”
Jonathan Brown said, “I’m ready to drag my backside out of bed again after 18 months in retirement. I can’t wait to get some motherly advice from Chrissie and for Sam to bring my coffee in every morning.”
Sam Pang, “I genuinely can’t believe Nova gave me a job. I’m so thrilled to be working with Chrissie Swan – other than Gabi Grecko and Mark Latham I can’t think of anyone I’d rather do radio with – and Jonathan Brown, who played 256 games of AFL and now he’s got five mornings a week to tell me all about them.”
This new line up demonstrates how important Melbourne is to Nova Entertainment and how serious Nova 100 is about delivering the number one breakfast show in 2016.
Chrissie, Browny and Sam will be heard on Nova 100 in January 2016.