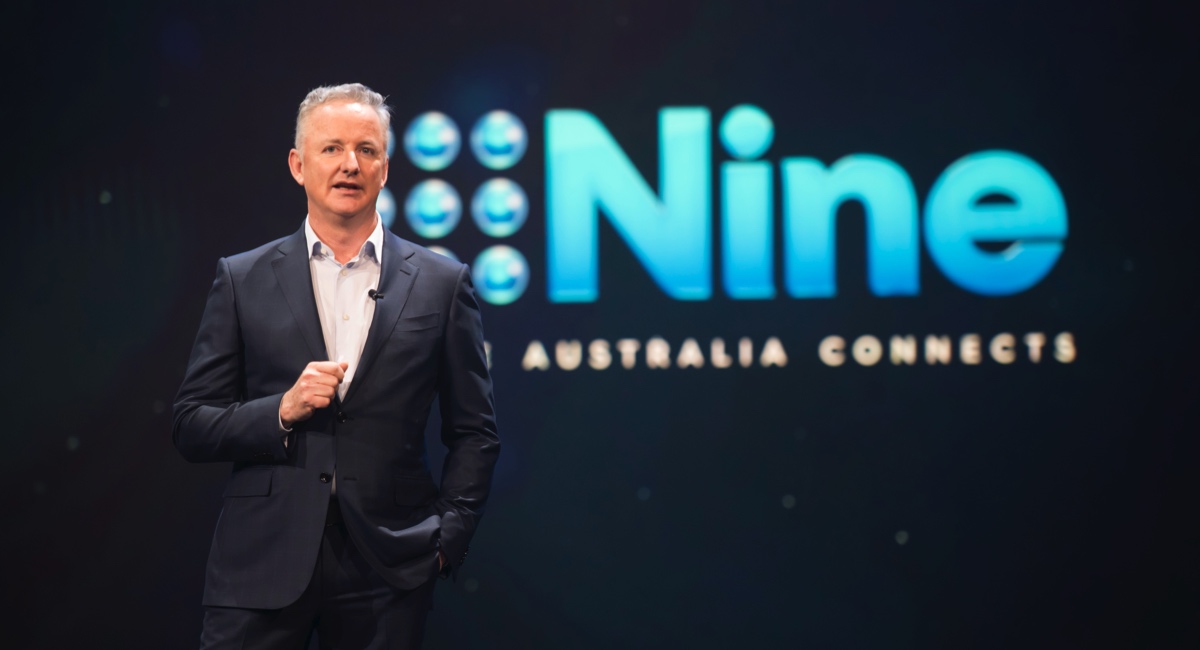 4:50pm Karl Stefanovic appears in pre-record talks with colleagues about making the Nine Upfront better. Lots of jokes and ideas about making it better…and shorter.

Hugh Marks then takes the stage: “A year ago we committed to deliver a range of things that would improve the opportunities we can bring to you, our partners.

“I’m pleased to stand here today and reflect on a year that I’m incredibly proud of. A year in which Nine has really lifted its performance.

“A year that sets us up brilliantly to work with you to achieve the outcomes we all want. Brand building, awareness and most importantly, sales.”

5.00pm: Nine reel then group content strategy director Lizzie Young on stage: “Our premium content sees us spending with our largest ever content budget. Local stories and characters are the key driver for brands to sell their product.

We offer the broadest distribution possible. From the heart of the Australian home to a device in the palm of your hand.”

Young shares a case study for Hotels Combined which reported a 40% lift in revenue and a 30% lift in bookings.

“We are serving our content to more people than ever before – extending TV’s traditional primetime to the early morning and the evening commute.

5.05pm: Another reel featuring interviews with Michael Healy, Adrian Swift, Hamish Turner. “A return to family viewing. Our shows speak to the heart of the Australian audience.”

The content kings talk about making 7.30pm stronger than ever.

Clips from Married At First Sight are played with a note the show this year gave Nine its best start in eight years. Short updates too on the following:

Sixth year of The Voice will feature “a completely new vibe”.

Australian Ninja Warrior – nothing at 7.30pm was better than this. Healy: “Australian audiences like event television and we have delivered something special. Prize money jackpots to $250,000.”

The new shows include the real estate/renovation series Buying Blind, and then “the drama event of 2018”, The Underbelly Files.

5.14pm: Lizzie Young back onstage. “I’m going to call it, 2018 looks very exciting. We have more consistency than ever before. You can leverage our connection with the audience.”

Another case study, this time from one of The Block ad partners: Domain achieved +30% for new users to the Domain app.

“Real and measurable results. This is not an isolated case.

“We are working on ways to reach the harder-to-get younger demographics with the commission of Love Island Australia, which has taken the international market by storm. The UK version has been one of our most-binged shows ever. It is best described as accelerated reality. It is a show with enormous potential for brands.”

5:20pm Shaun Micallef onstage talking about his new home for Talkin’ ’Bout Your Generation and then he introduces Karl and Georgie Gardner who talk about Nine News.

The network offers a video first service for Australians across all platforms.

“We are a 24/7 operation. Later the Nine News Alert app will be expanded. Nine News delivers over 15m video streams each month to a unique audience over 4m. News for all Australians of all ages.”

5.26pm: Nine Sports segment starts with test highlights and then highlights from netball, NRL and State of Origin. Head of sport Tom Malone onstage with Erin Molan. Emphasis on Nine’s commentating teams. “When a legend off the game steps of the field they step straight into the Nine commentary box.”

This summer, ball tracker will be enhanced.

Malone talked about success of some key netball finals that have been screened on 9Gem. Next year from April to August the Suncorp Super Netball.

The Women’s Ashes for the first time on FTA – three back-to-back tests starting October 22 this year.

Nine next year has full digital rights for NRL with new opportunities to integrate brands.

Helen McCabe onstage and she talks about their close to 2m monthly unique users. Relaunch coming – rebuilding the site and expanding the Honey brand. More podcasts among other things.

“We are also bringing Honey to TV starting with Love At First Sight panel show on Wednesdays at 9pm next year on 9Life.

“It will be for women who are hungry for professional and personal advice. Membership will also allow access to events etc.”

“From 9am Thursday we are ready to begin trading. There has never been a more critical time for marketers to invest to drive sales growth. Nobody can do it as well as Nine with a combination of our television and our digital assets.”

5.50pm Final highlights reel including Hamish and Andy highlights plus Scott Cam hosting a trip around the Gatwick Hotel, the location for the next season of The Block, which Scotty promises will be “huuuge”.

6.00pm Karl Stefanovic back onstage as event ends, “six hours ahead of schedule”.

Special performance by Kelly Rowland who is also in Australia for the Hit Network RnB Fridays Live Tour which started last night in Sydney.