The Media i Awards are the only awards dedicated to the contribution of media owners.

The 10th anniversary of The Media i Awards, recognising media sales excellence, were announced in a virtual first for the program due to Covid-19 restrictions.

Voted by peers, the Media i Awards acknowledge the important role media sales representatives play in the continual pursuit of media advertising excellence.

Introduced in 2011, the Media i Awards are the only awards dedicated to recognising the contribution of media owners.

Charles Parry-Okeden, CEO Media i, spoke during the ceremony of the importance of collaboration between media agencies and media partners noting the challenges faced during 2020 and praising the efforts of the media owner fraternity.

“Whilst there has been universal impact across our industry, evidenced by year on year declines in spend levels across the board, the degree of impact has of course varied by sector.

“Initially, when Covid struck teams dived headfirst into crisis management with a strong emphasis on communication and a focus on staff and company wellbeing. Whilst individuals dealt with the increased workload of significant campaign management demands and all from their isolated home environment.

“In many cases working more for less, Media sales people have required an abundance of self- motivation, resilience, and creativity to navigate this year. These have always been the core attributes of a great media sales professional and no more have these skills been required than 2020.”

Chris Winterburn, managing director Media i, declared this year’s awards the most important in its 10 year history.

“We are extremely proud of tonight’s event. We questioned often whether holding tonight’s awards was the right thing to do given what many individuals and business in our industry have faced in the last 6 months. It has been a very difficult period. That said we have also seen and heard our industry’s response – a response headlined by its positivity and punctuated by its empathy and collaboration.

“We have witnessed individuals and teams rise to the challenge and collectively arrived at the realisation that our industry, and those who comprise it, deserved to be celebrated – and that this year’s awards were perhaps the most significant that we have held.

“The response from our finalists has been overwhelming reinforcing the significance of this initiative to sales teams and individuals across the country. We would like to congratulate all of tonight’s winners on their fantastic achievement.”

Run by Media i, the awards are sponsored by the Media Federation of Australia and returning category sponsors; Carat, Kaimera, Mediabrands, OMD, PHD, Starcom, The Media Store, UM & Zenith.

This year saw the 4 of the 6 team awards presented to sales teams from television networks.

Overall, the awards were hotly contested with Nine the most awarded media company on the night receiving 7 awards, followed by Network 10 and News Corp Australia with 4 awards apiece and Verizon Media and ARN with 3 awards.

Nine were presented with the National Sales Team of the Year award by MFA CEO Sophie Madden, and MFA Chairman and CEO of Omnicom Group Australia, New Zealand Peter Horgan. 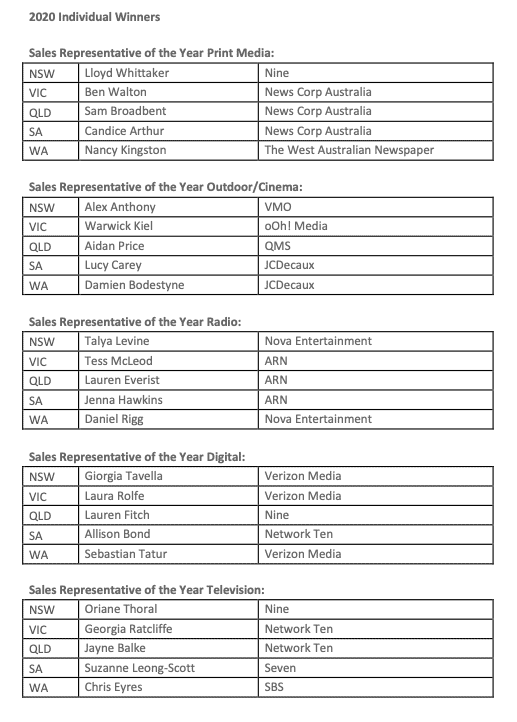