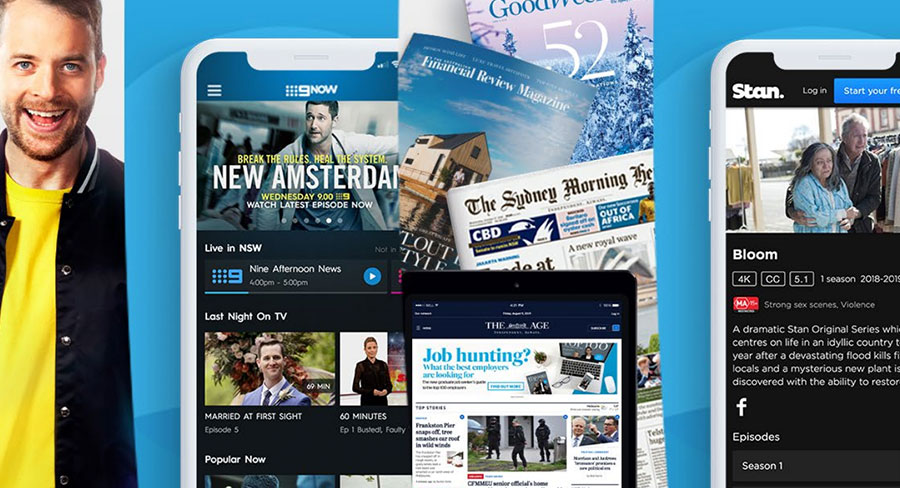 Nine Entertainment Co has released its H1 FY20 results for the six months to December 2019.

On revenue of $1.2b, Nine reported Group EBITDA of $251m, and a net profit after tax of $114m. Post specific items, the statutory net profit was $102m. (The numbers are stated excluding discontinued businesses.) 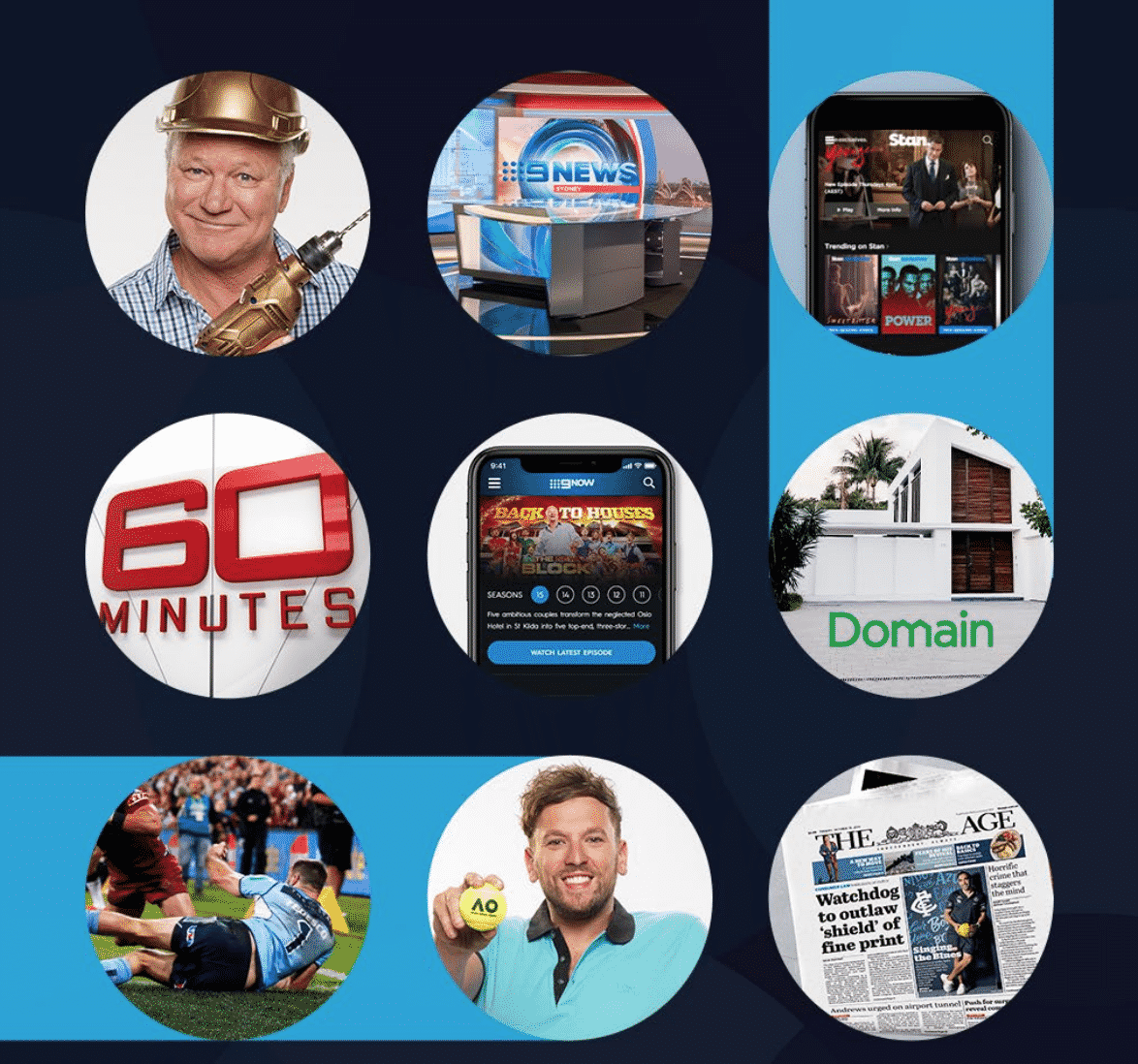 Highlights from the results presentation: 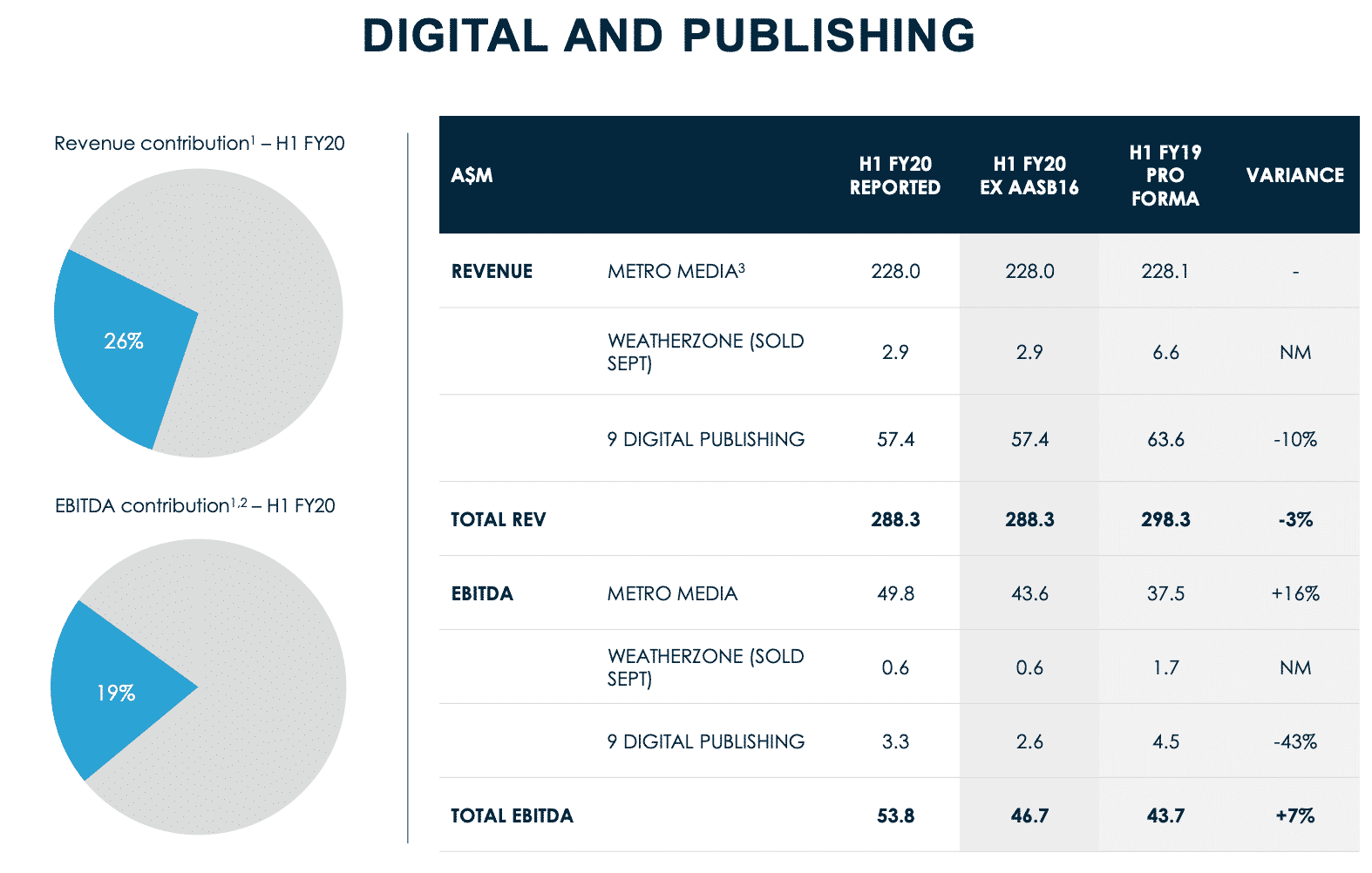 Hugh Marks, chief executive officer of Nine Entertainment Co said: “This result is a testament to the work we have done over the last four years to reposition Nine for a digital future. With strong growth in our digital businesses helping to offset some of the cyclical headwinds faced by our traditional media assets.

“We have now clearly established Nine as the leading domestic player in the digital video market with both 9Now and Stan recording very strong growth in the period. Growth that we expect to continue into H2. We have successfully unified our first party database across all of our owned and controlled businesses, meaning we are in a position to offer our partners the benefits of more targeted advertising across the Nine suite of assets.

“Recognising this company-wide evolution, we believe there is significant potential to refocus the cost structure of our FTA business, targeting the removal of up to $100m in annualised costs over the next 3 years – costs that will not inhibit our ability to continue to invest in the growth opportunities around premium revenue and digital video, as we have done successfully over the past three years. 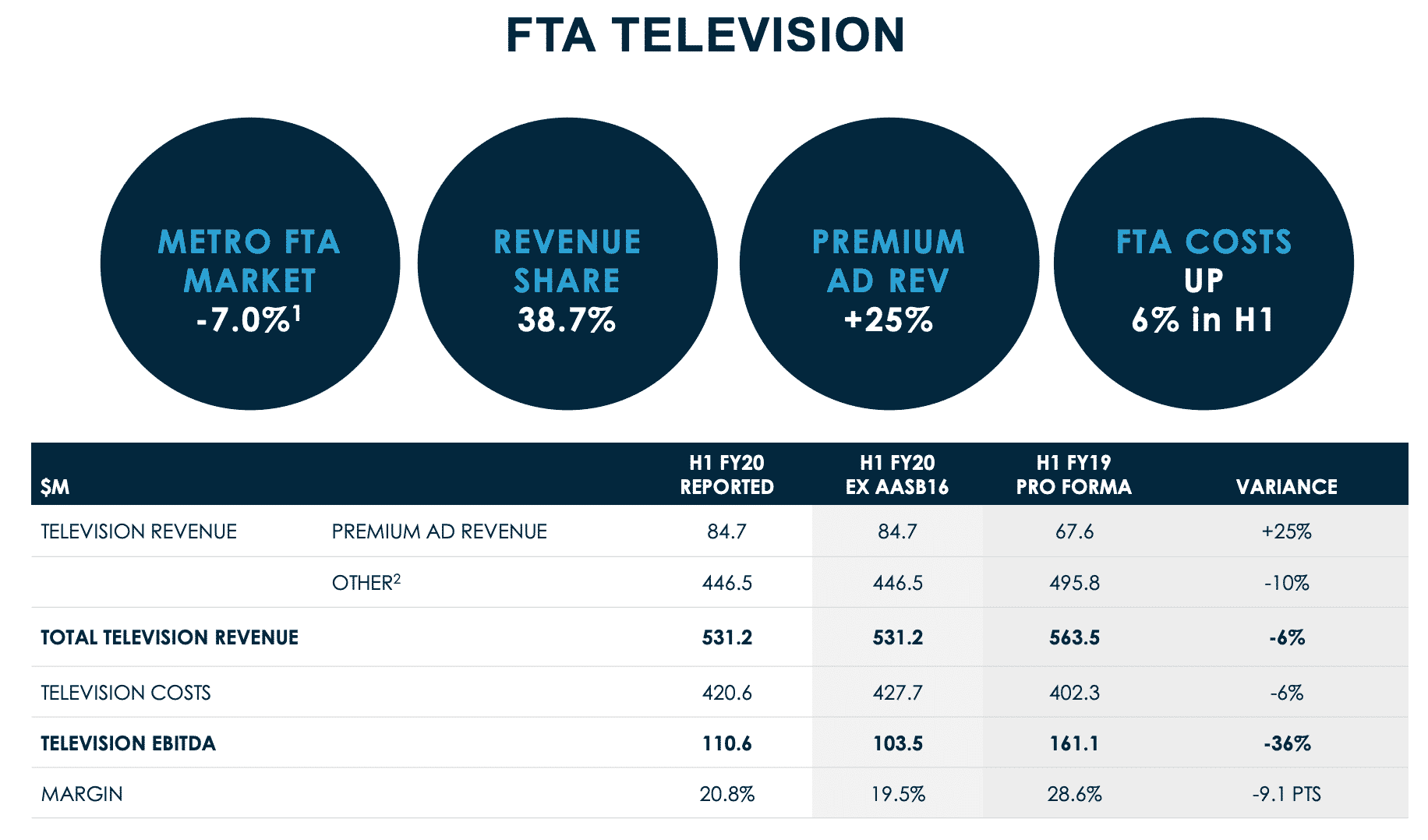 Nine Network reported a revenue decline of 6%, from $564m to $531m for the half. Reflective of a very difficult overall advertising market, the Metro FTA ad market declined by 7% . Nine’s Metro FTA share of 38.7% was marginally down on pcp and was disappointing in light of Nine’s strong ratings performance.

In the December half, Nine also won all of the key demographics .

Ex the impact of AASB16, FTA costs rose by 6%, or $25m. This reflected the one-off broadcast of the UK Ashes and World Cup Cricket ($16m) as well as a contracted $8m increase in NRL rights costs. Full year costs are expected to be up by around 2.5%, equating to a slight reduction in the second half.

In a BVOD market which grew by 43% for the half to $87m , 9Now held its share ~50%, for revenue growth of 44%. Users and engagement continued to grow with long form VOD minutes increasing by 31% across the half on pcp, and live streams up by 137%. 9Now increased its EBITDA contribution from $16m to $27m, up 65%. 9Now will continue to invest in incremental content to further expand its position in Australia’s fast-growing digital video market. 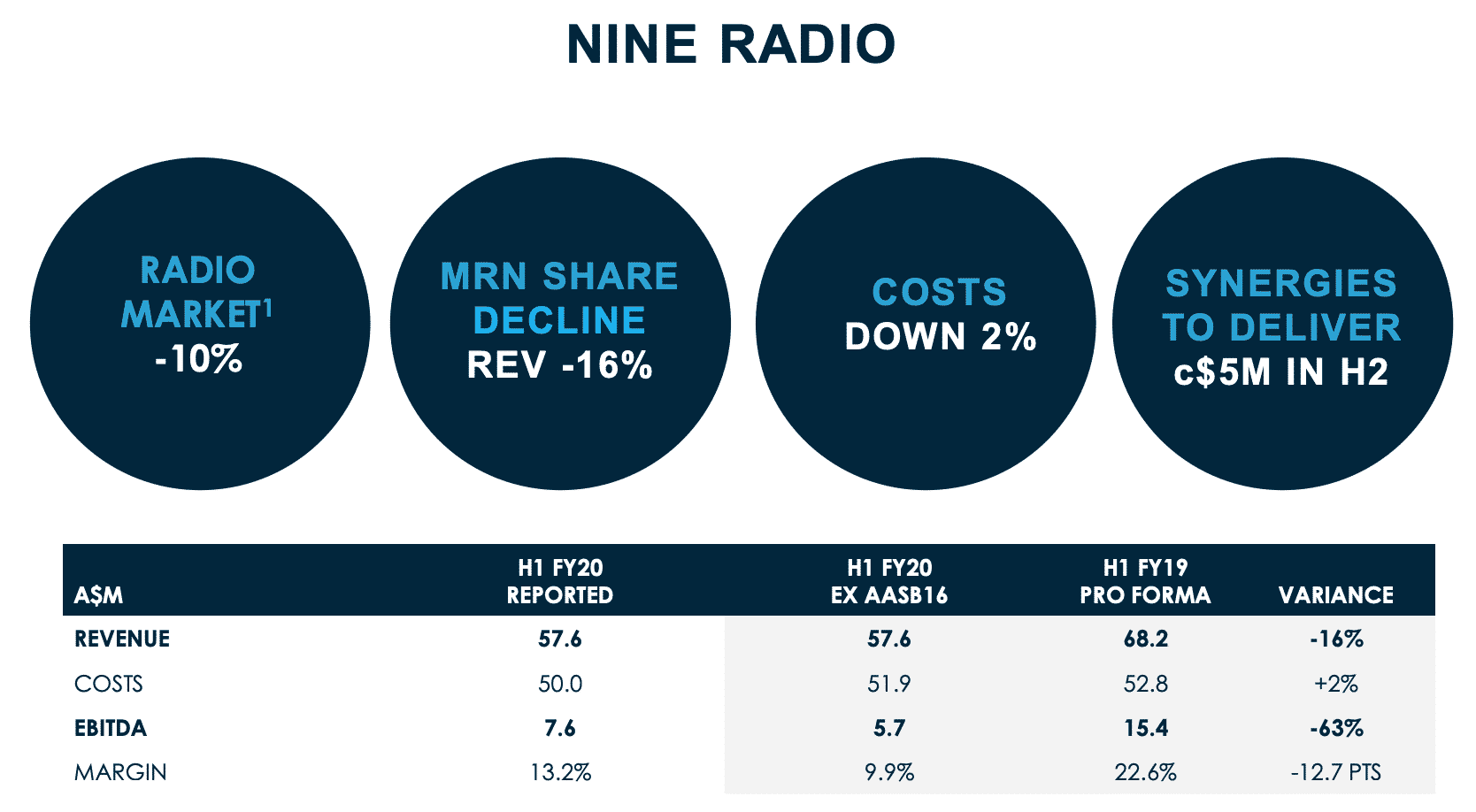 Acquisition of the minorities in Nine Radio (previously Macquarie Radio) was completed in November. For the six months, revenue was down by 16%, to $58m, reflecting both the slower metro radio ad market (down 9.7% for the half) as well as well-documented issues specific to the Macquarie business. Notwithstanding a slight cost decline, Nine Radio reported EBITDA of $8m.

Since taking full ownership, Nine has made significant changes to its Radio business – consolidating back-office functions, sales and news into Nine and reformatting the loss-making Sports Network. Coupled with continued audience strength, this should underpin leverage when the ad market improves. 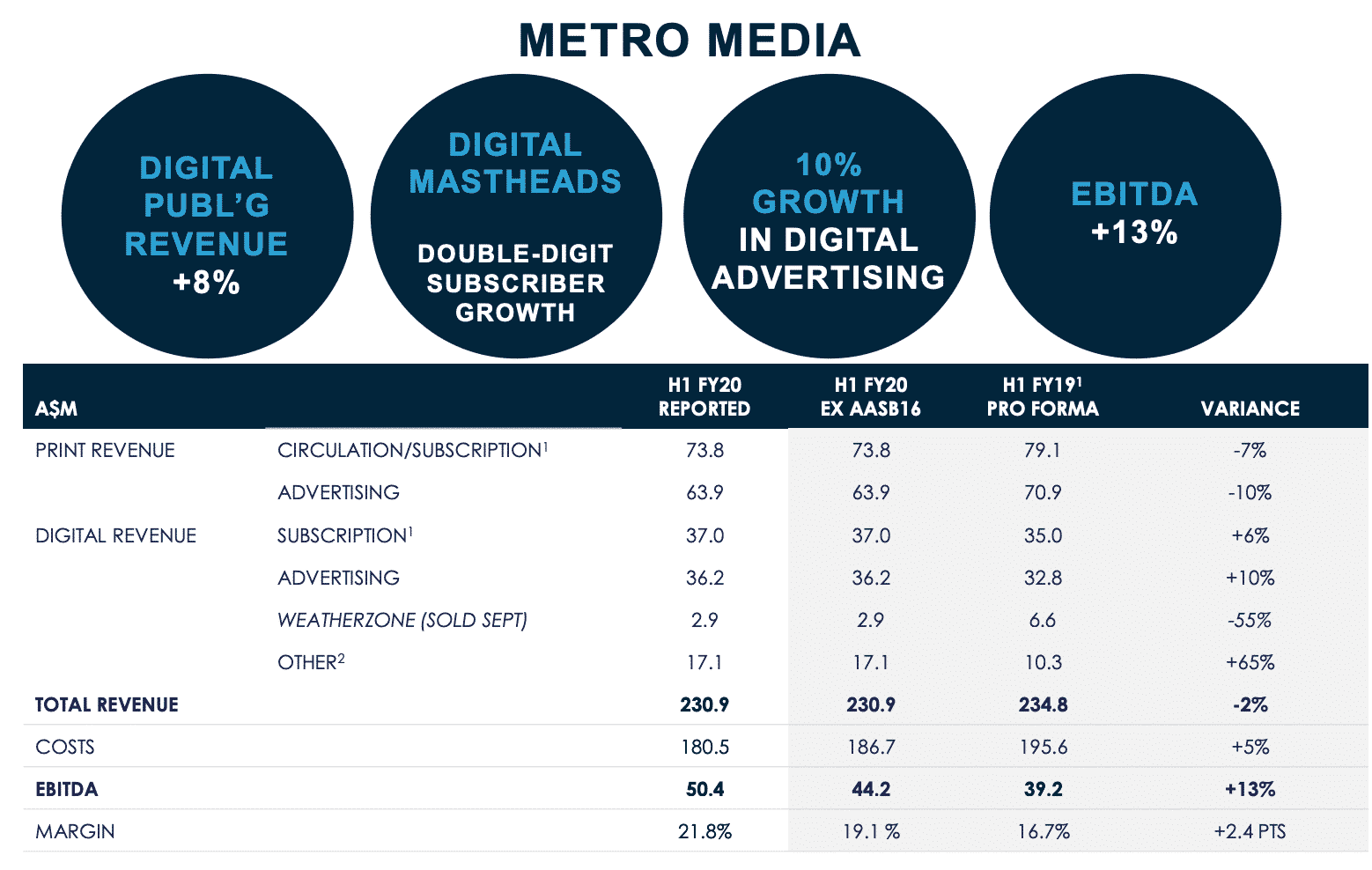 Metro Media reported flat revenue in a challenging ad market. Share gains in print offset part of the ad market weakness, while Digital (subscription and advertising) revenues grew strongly. On average, double-digit growth in digital subscriptions across The Age, The Sydney Morning Herald and The Australian Financial Review reflects the reweighting of the business to both the digital platform and consumer revenue.

Digital advertising revenue growth of 10% was underpinned by growing premium audiences across all mastheads, as well as the benefits of being part of the broader Nine Group. Excluding the impacts of the Weatherzone sale and Events inclusion, Metro Media costs were down by 8%, consolidating previous cost initiatives.

Stan subscriptions up to 1.8m

During the half, Stan grew its active subscriber numbers to more than 1.8m currently. The combination of ongoing subscriber build and the $2 price rise from March 2019 underpinned the 79% increase in Stan’s revenue across the half. Further investment in content and marketing contributed to the 18% increase in costs. In combination, EBITDA improved by $35m, for an H1 total of $14m.

Stan continued to consistently build subscribers across the half – driven by the expansion of the group’s iconic series, led by new content from Fox/Disney, as well as Stan’s biggest summer of originals. Average weekly viewing hours per subscriber increased by more than 25% over the summer weeks.

Nine’s March quarter FTA revenues are expected to be broadly flat, year-on-year as Nine’s superior ratings performance in 2019 and the start of 2020, has underpinned clear growth in revenue share. For the June half, Nine expects the FTA market to decline by around 5%, offset by growth in share of around 2 points (on pcp).

Continued strong growth is expected at 9Now, with EBITDA growth tempered by increased investment in content, as the business expands into the broader digital video market. The market is expected to continue to grow around current rates and for Nine to remain at the forefront of this growth.

Second half results at Nine Radio are expected to show a marked turnaround, as the cost base is reset. Revenue performance has been impacted by the rate of advertiser return to 2GB, which is expected to improve moving into 2021.