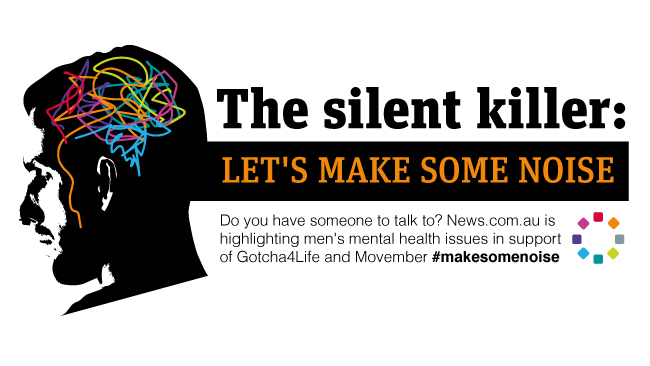 Suicide is the leading cause of death in men aged 15-44 and the number of men who die every year exceeds those killed in road accidents. In Australia, about 75% of suicides are committed by men. They are three times more likely to self-harm than women.

Over the next four weeks through news.com.au editorial and video content, the campaign The Silent Killer: Let’s Make Some Noise will encourage men to talk to each other, and their family and friends, about what’s going on in their lives.

The campaign will also be supporting the work of Gotcha4Life and Movember.

News.com.au editor-in-chief Kate de Brito said: “We are seeing these stories every day and the statistics are horrifying. It is a crisis we cannot ignore. News.com.au has an audience of over 9.5 million each month and we want to use this reach to help bring about positive change on important issues.

“Crisis services are doing their best. However, some believe we must begin to focus on the way they deal with men and women differently in order to reach the men who so desperately need help but are afraid to reach out.”

Triple M radio host Gus Worland and his friend Gareth Pike co-founded Gotcha4Life. Its aim is to improve the mental health of men and boys, to save lives through better connections with friends, family and community, and to encourage men to reach out to a mate they can confide in. Gotcha4Life powers educational workshops, which help teach about resilience, friendships and the strength in vulnerability and support a scholarship program with Lifeline to train more men to be online crisis supporters.

Movember is dedicated to changing the face of men’s physical and mental health in part through its successful campaign to Grow A Mo, Save A Bro that inspires donations, conversations and real change.

The Silent Killer: Let’s Make Some Noise campaign will also include a list of services aimed at men in one place on the site, as well as links in all content pointing to Gotcha4Life and Movember.