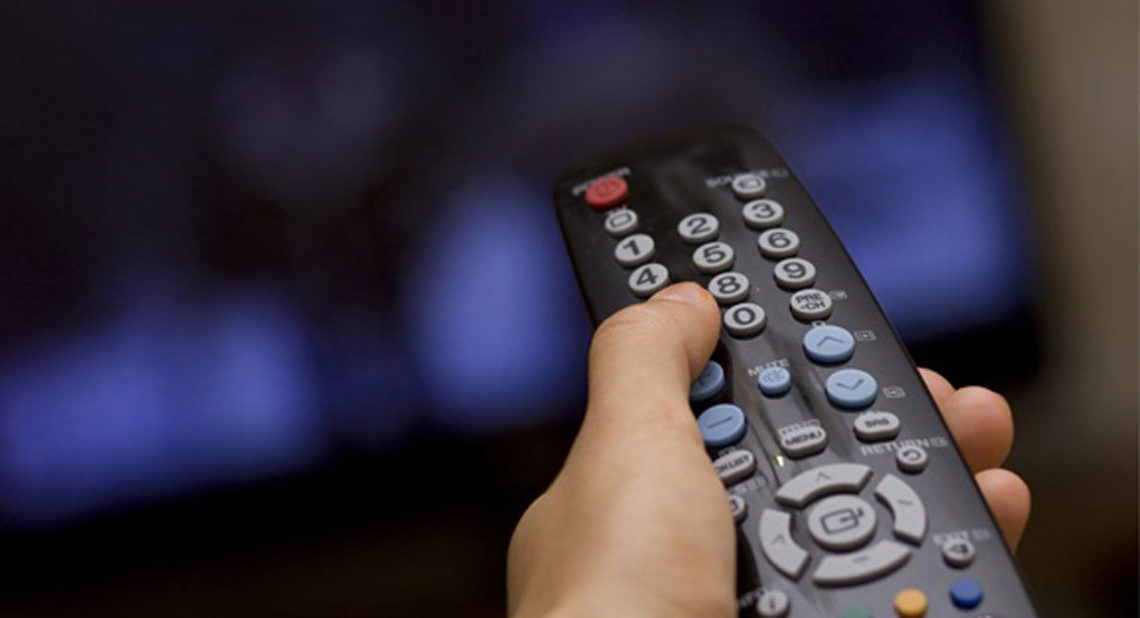 The ACMA surveyed 1,505 Australian adults in May and June 2015 and found a massive increase in SVOD use, with strong preference to Netflix

The ACMA surveyed 1,505 Australian adults in May and June 2015 and asked about their use of subscription online video services.

Launch and take up of SVOD services
Subscription video on demand is growing rapidly in Australia, becoming an increasingly popular way to watch video content. SVOD services provide users with unlimited access to a wide range of video on demand content that can be viewed at any time, for a flat monthly fee. SVOD services are distinct from other online video services such as pay-per-view, catch-up television or other professionally-produced online content.

From January to March this year, Australia saw the launch of new SVOD services, including Netflix, Presto TV and Stan, and the take-up since then has been rapid. With the introduction of these services, Australians now have a greater range of video content viewing options.

This snapshot distinguishes between ‘SVOD users’ and ‘recent SVOD users’:

‘Recent SVOD users’—those who watched video content via an online subscription service in the last seven days at June 2015.

Use of SVOD services
The ACMA survey found that an estimated 3.2 million adult Australians (17 per cent) watched video content via SVOD in the six months to June 2015, and 2.2 million (12 per cent) in the last seven days at June 2015.

Launched in March 2015, Netflix accounts for the majority of SVOD services used in Australia. An estimated 2.5 million adult Australians (14 per cent) used Netflix Australia to stream TV shows or movies in the six months to June 2015.

SVOD user profile
Those with the following demographic characteristics are more likely to be SVOD users if:

• live in a household with children (of any age)

• own an Apple TV 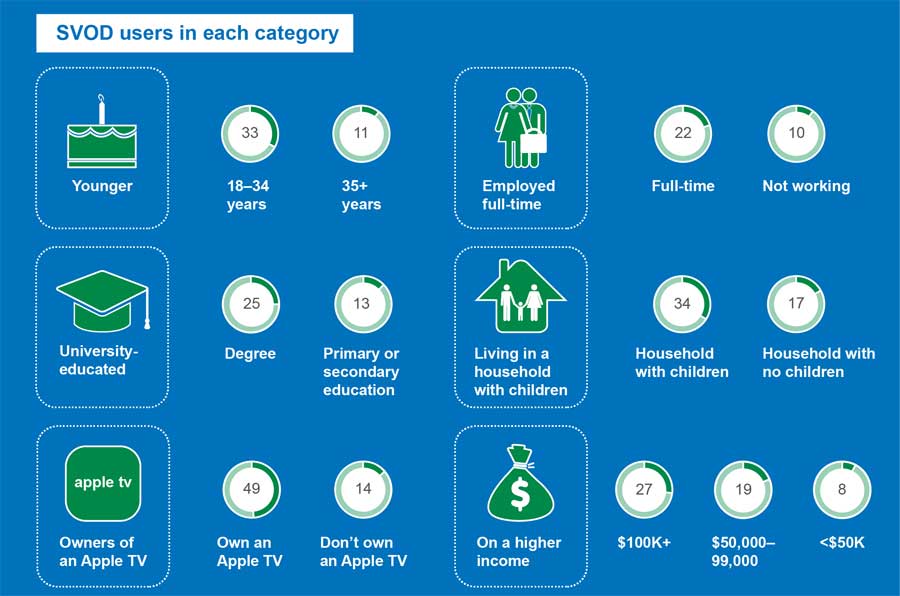 Why are SVOD services becoming so popular?
Streaming services allow a user to watch video content on their own terms—at any time that suits. Almost half of SVOD users (49 per cent) reported this as one of the main benefits of accessing video content online, as compared to watching content on pay TV or free-to-air television. Greater choice of content (44 per cent) and lower cost (21 per cent) were other major benefits reported by SVOD users.

SVOD users are more likely than non-users to recognise these benefits, with only 30 per cent of all adults identifying ‘watching at a time that suits’ as a main benefit of watching video online.

Time spent using SVOD services
Recent SVOD users spent an average of eight hours watching video content via an online subscription service in the last seven days to June 2015. Those aged 18 to 34 watched almost double the hours of SVOD content (9.9 hours on average) compared to those aged 35 and over (5.2 hours on average).

The television is the most popular screen used for viewing video content via an online subscription service—59 per cent of recent users viewed SVOD content on a television set in the last seven days to June 2015. The next most popular device was a desktop or laptop computer, used by 41 per cent of SVOD viewers, followed by a tablet (21 per cent) and a mobile phone (12 per cent).

The majority of SVOD users (78 per cent) are satisfied with the technical quality of the online video content that they access. Four in 10 SVOD users (40 per cent) reported to be ‘very satisfied’ and a further 38 per cent ‘somewhat satisfied’.

While satisfaction with the technical quality of online content is high, more than half (55 per cent) of recent SVOD users experienced technical problems associated with viewing online video content in the seven days to June 2015.