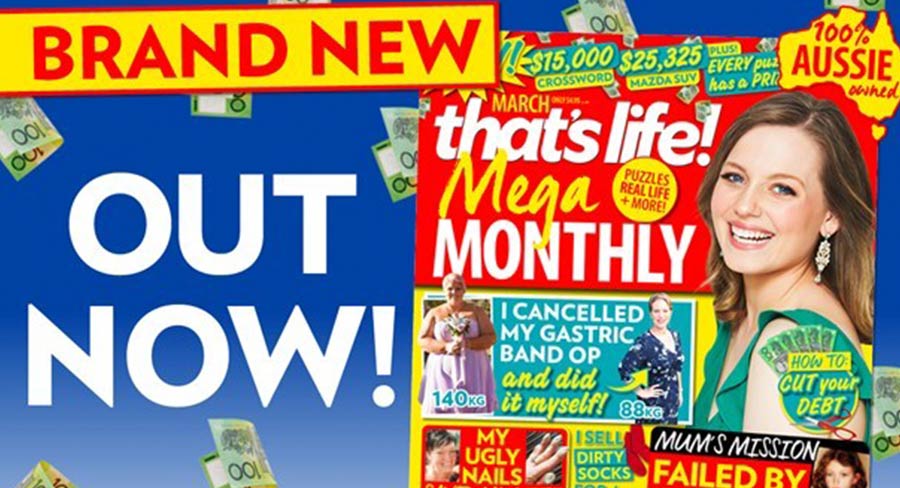 Around 750,000 That’s Life! readers were very interested in a major development for the brand this week. Otherwise celebrations around what is a major publishing event seemed muted. (The magazine did thoughtfully supply lamingtons to key media though!)

That three quarter of a million readers now have another chance to engage with the brand via a monthly print edition now being published in addition to the weekly print magazine.

Those readers have been enjoying their weekly dose of amazing real life stories mixed in with recipes, puzzles and the chance to win prizes. The new monthly That’s Life! delivers on all fronts. In the first monthly edition of the magazine there are over 30 competitions with chances to win a new Mazda, $15,000 in cash in addition to many other cash and gift prizes, some for less than $100. The magazine competes in a small category that is also home to Bauer Media’s Take 5, which has also recently launched a monthly version. That’s Life! editor for 13 years, Linda Smith, is confident her Pacific title outsells its Bauer competition.

Smith indicated That’s Life!’s share of the real life magazine sector had been stable for the past four years. “We have remained #1 in the category for 25 years,” she told Mediaweek.

Reflecting on her time editing the title, Smith calculated she has written over 600 weekly editors letters to readers. She insists she doesn’t recycle them either! “That gives me a close connection to the readers because they always generate responses. They feel like they know me because of what I write about my life and my family. It helps to personalise the magazine.” With the new launch, Smith said she strived to make it clear it was a new title, not a replacement. “The weekly is not changing and will continue to publish weekly. The new magazine looks very different apart from the use of the same masthead. The format is noticeably bigger which helps ensure there is no confusion about our two titles.”

Retailers should love this magazine because it continues to sell in both newsagents and supermarkets and it remains strong too in regional and metro areas.

The new monthly is priced at $4.95, just a small increase on the $3.60 Pacific charges for the weekly.

The magazine was originally launched by pioneering Aussie independent publishers Steve Bush and Deke Miskin back in 1995 when they teamed with publisher John Motion when Attic Press and Southdown Press became Pacific Publications.

It’s not just all puzzles and prizes that have kept the readership strong for quarter of a century. The editorial mix is key.

“And it’s not all good news they want,” said Smith.

“They do want to read crime and sad stories. If anything the monthly might have a little more editorial warmth than the weekly. We have reader tributes to people plus we have someone revealing their personal diary.

“There continues to be hunger for real life stories. The success of something like The Teacher’s Pet podcast is proof of that.”