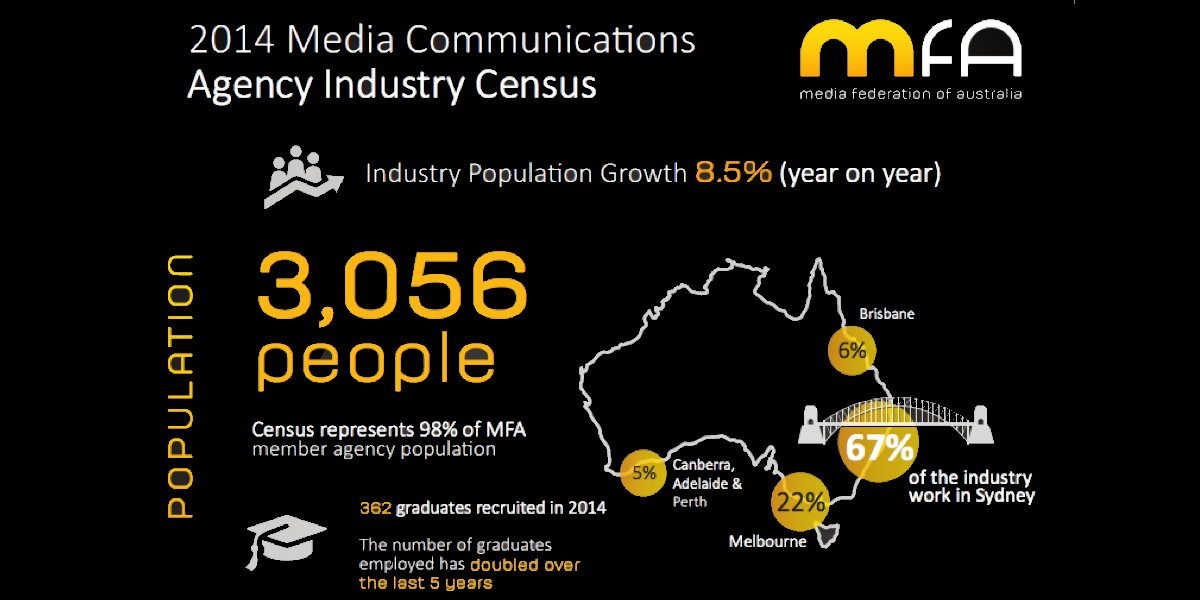 Results of an industry-wide census released by the MFA reveal a thriving and dynamic media industry, with 8.5% year-on-year population growth driven by the transformation and change to media agency businesses. The 2014 Media Agency Census is based on MFA member agencies, and those contributed represent 98% of the MFA member agency population.

According to the census results, non-traditional media services such as social media, digital, mobile operations and creative now represent 37% of MFA member agencies’ roles – a significant increase from 32% year prior. Population numbers have grown too: 3,056 people are now employed by MFA member agencies, which is an increase of 51% over the last five years, while the number of graduates employed has doubled in the past five years to 362.

Regrettable loss is now at 26.8% – a dramatic reduction of 14 points since 2008, the year that NGEN was established.  People leaving the industry permanently are at 4.9%.

The results show there are more women in senior management positions in media than across other industries in Australia – 40% compared with the national average of 31.7% (according to the Workplace Gender Equality Agency, 2014 report).

“The census provides valuable insight into the changing landscape of our industry and the requirements of our clients,” says Peter Horgan, chairman of the MFA, and CEO of OMD Australia. “We are encouraged by the data – it shows a healthy and versatile industry, with many of our member agencies experiencing significant growth in areas that didn’t exist five years ago.”

Sophie Madden, CEO of the MFA, concurs: “The Media Agency industry is no longer just about planning and buying, we have the capability to offer multidisciplinary expertise to clients through a growing number of services such as search, social media, content and data analytics.” Growing population numbers, she says, are also good news and highlight the importance of MFA programs such as the Intern program, NGEN and MFA 5+, not just in attracting new graduates but in retaining and inspiring existing talent.