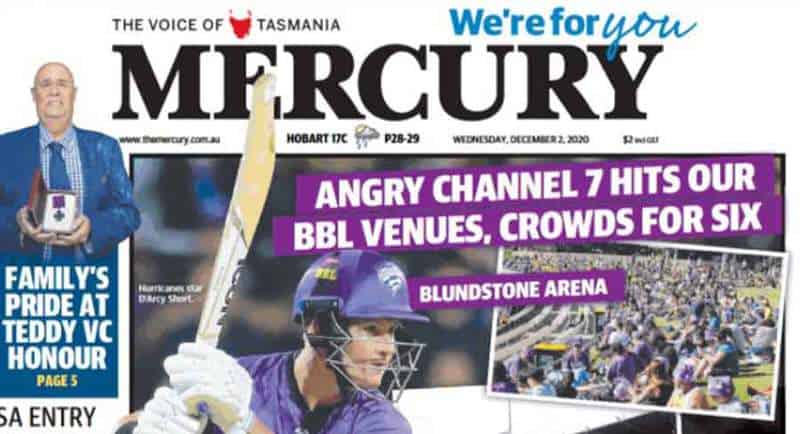 Channel 7 is threatening to sue Cricket Australia for “many millions of dollars”, claiming it was subservience to India and inducements from state governments – not COVID-19 – which drastically altered the summer schedule, report News Corp’s Ben Horne and Peter Lalor.

In an affidavit filed to the Federal Court as part of a ‘pre-discovery’ process, Channel 7 head of sport Lewis Martin outlines his belief that Cricket Australia has breached its contract with the free-to-air network.

Channel 7 claims it has suffered significant commercial damage because Cricket Australia changed its original schedule, which included three Test matches before Christmas, to a new schedule with only one Test in that key ratings period where they would be up against Channel 9’s The Block.

Instead, six white-ball matches against India – all exclusive to Fox Sports – were put to the front of the schedule, pushing two Test matches until after Christmas and delaying the start of the BBL.

Cricket Australia caved to the power of India in making a “radical departure” from its summer schedule, according to an extraordinary affidavit filed by Seven West Media to the Federal Court containing a series of text messages and emails from the sport’s executives, report Nine’s Chris Barrett and Jon Pierik.

In a 25-page document, Seven’s Melbourne managing director and head of sport, Lewis Martin, also makes the explosive suggestion that CA may have been driven by a commercial agreement with the Tasmanian government in deciding to play eight of the first 12 matches of this summer’s Big Bash League in the state against the wishes of the media company.

“It appears to me that CA’s scheduling decisions may have been motivated by CA’s broader interests in relation to the BCCI, Foxtel and also a positive incentive given to CA by the State of Tasmania,” Martin wrote.

The Mercury: Channel 7 has launched a blistering attack on Tasmania

An extraordinary attack ridiculing Tasmania’s two premier sporting venues has been launched only eight days out from the Hobart Hurricanes hitting off the 10th anniversary Big Bash League with a blockbuster night game against Sydney Sixers in Hobart, reports The Mercury’s James Bresnehan.

In a coup for the state, 10 matches of this season’s BBL will be played in Hobart and Launceston, and the Hobart Hurricanes will play in six of them.

However, Channel 7 is not happy with the Tasmanian BBL hub and in a 28-page document presented in court in Sydney, as part of its growing legal battle with Cricket Australia, it launched an unprovoked attack on the home of Tasmanian cricket – Blundstone Arena – and Launceston’s AFL venue UTAS Stadium.

There can be few better places in the world to go along and watch the cricket than Hobart’s Blundstone Arena, writes The Mercury’s editor Jenna Cairney in an editorial.

Nestled on the banks of the tranquil Derwent River, with views across the water from the top of the stands. Our top-tier cricket ground is a wonderful reflection of Tasmania’s unique and pristine natural environment.

And yet, for reasons known only to Channel 7’s leadership and of course the team of supposed legal eagles the TV station has assembled in an effort to low-ball Cricket Australia on its broadcast rights, we’re told the network doesn’t like coming to the Apple Isle.

A member of a new oversight board that will scrutinise decisions by Facebook to remove posts from its main platform and Instagram has said the social media giant must do more to eliminate hate speech and misinformation, reports The Sydney Morning Herald’s Zoe Samios.

Katherine Chen, former commissioner at Taiwan’s national communications commission, is one of 20 members of Facebook’s new Oversight Board which also includes representatives from Australia, Taiwan, Pakistan, the United States and the United Kingdom and was first announced by founder Mark Zuckerberg in 2018.

The newly formed board will initially scrutinise six cases of hate speech, nudity and violence in Facebook’s first attempt to develop stronger standards. “The cases may change Facebook policy,” Chen said. “If we make a decision on a case, then Facebook has to follow and respond to our decision.”

Dr Stead, who was also previously the manager of the South Australian Venture Capital Fund, is suing Aston for defamation over a series of columns which she claims made her look “reckless” and “stupid”.

Nine Entertainment Co filed a defence in March which denied the articles published by the AFR made Ms Stead out to be “reckless” or that she “made stupid investments”, but also argued that “each of those imputations is substantially true”.

The matter is scheduled to continue until December 14.

The ABC is preparing to fire back at Federal Communications Minister Paul Fletcher after he asked board chair Ita Buttrose to explain how a recent Four Corners episode exposing alleged affairs and inappropriate behaviour between ministers and staffers was in the public interest, report The Sydney Morning Herald’s Lisa Visentin and Zoe Samios.

In a letter to Buttrose, Fletcher posed 15 questions to the ABC board requesting an explanation within 14 days as to how the episode complied with the ABC’s code of practice and its statutory obligations to provide accurate and impartial journalism.

Compelling as it is, there’s not a lot new in After The Night, a four-part documentary series about Australia’s most notorious serial killer. But given it is more than 60 years since Eric Edgar Cooke embarked on his campaign of terror in Perth, and 57 since his arrest, it would be a shock if there were, reports The Age’s Karl Quinn.

The facts are settled, but they’re also so far back that – for some of us – this will be their first airing. And for many who were there at the time, it’s likely their last chance to bear witness.

Writer-director Thomas Meadmore has built the vehicle in which we take this tour of a distant past in which people didn’t lock the door and often slept on the porch, or even in the garden, if it was hot enough. That was until the night in 1963 when Cooke shot five people, three of them fatally. But it is journalist Estelle Blackburn who steers the story, retracing the route taken in her 1998 book Broken Lives.

Meadmore and Stan clearly aimed to do something here in the vein of Making a Murderer (Netflix) and The Jinx (HBO), which have done so much to redefine the true-crime genre. After the Night tries hard, but it doesn’t quite have the chops to pull it off.

Kmart is taking its Christmas message to the next level with a TV special inspired by the challenges we have all faced through COVID, reports News Corp’s Kim Wilson.

Unlike anything the retailer has ever done, Kmart has partnered with Channel 9 to produce Small Gift, Big Heart: a 30-minute Christmas TV special celebrating the Australian Christmas spirit through the eyes of nine-year-old Riley who represents an Aussie kid navigating the difficulties of 2020 with his family ahead of the Christmas season.

“We all faced a challenging year in 2020 and this TV special allows us to take a moment to reflect and consider the ways we can continue to be there for each other as a community over Christmas and beyond,” he says.

“This is a first for Kmart, delivering a TV special that encompasses our values through an Australian story. The representation of community through authentic storytelling showcases the power of overcoming adversity.”

Lisa Wilkinson has touched on the bungled airport reporter clash on both Today and Sunrise on Tuesday morning, report news.com.au’s Andrew Bucklow and Bianca Mastroianni.

Hilariously, Mac grabbed the Today microphone and pretended to be a reporter for that network.

On The Project, Lisa was shown the footage and asked whether or not Mac had ever grabbed her mic.

“I dont know how the network bosses will feel about that, but good on Sam Mac!” Lisa quipped with raised eyebrows.

The rival breakfast shows jostled to get interviews with Qantas passengers arriving on first flights into Brisbane.