News Corp executive chairman Rupert Murdoch is “cautiously optimistic” that technology giants such as Google and Facebook will be made to pay for the news content carried on their platforms in the wake of sharpened scrutiny into their operations, reports The Australian’s Lilly Vitorovich.

“Our battle against the big tech platforms, for years a solitary struggle, has helped lead to scrutiny of their monopolistic and algorithmic abuses,” Murdoch said during the group’s first virtual annual shareholder meeting.

“With some finally providing some payment to publishers, the fate of a free press hangs in the balance, and I’m cautiously optimistic that we’ll see even more material benefit from this effort in the years ahead.”

Rupert Murdoch has told News Corp’s shareholders that the company does not deny climate change during a 26-minute virtual annual general meeting on Thursday morning, reports The AFR’s Max Mason.

When asked why the board could not accommodate his younger son James’ views, the executive chairman said: “We do not deny climate change. We’re not deniers.

“Our board is open to any discussions…James …claimed that our papers …covered the bushfires in Australia….without discussing climate change,” Murdoch said in his appearance which appeared to have technical difficulties while he was answering.

Market sources told The Sydney Morning Herald and The Age that BGH will offer two scheme arrangements that value the theme park and cinema operator’s shares at about $3, a significant improvement on the current proposals worth $2.32 and $2.22 respectively.

The shock resignation of Nine Entertainment chief executive Hugh Marks has exposed the divisions on the television, publishing and digital company’s board along historic fault lines. The members of the old Fairfax board on one side and Nine’s legacy directors on the other, comments The Sydney Morning Herald’s Elizabeth Knight.

Which of the two internal Nine candidates replaces Marks, who spectacularly announced his resignation over the weekend following revelations of romantic involvement with a staff member, may largely be a function of which of the board factions prevails.

While there will be an external process conducted, it is considered far more likely that either Nine’s chief of digital and publishing Chris Janz or the head of Nine’s video streaming business Stan, Mike Sneesby will be elevated to the top job.

If the Fairfax board faction has its way, Janz will have the front running. Yet Peter Costello, who retained the chair at Nine after the Fairfax merger and is a Marks supporter, is considered to look more favourably on Sneesby – such is the tribalism that remains at board level.

Former SAS corporal Ben Roberts-Smith offered up his prized Victoria Cross, and other wartime medals, as collateral for a $1m loan from billionaire businessman Kerry Stokes, which helped fund his defamation action against Nine Entertainment, reports The Australian’s James Madden.

Stokes, chairman of Seven West Media, has been a long-time backer of Roberts-Smith, and told The Australian in a statement on Thursday that the decorated former soldier retained his full support in the wake of the allegations arising from the Brereton report.

Stokes said the funding of the former soldier’s legal action was “a private matter”. “However he has put his medals up as collateral on a loan and will relinquish them if required,” he said.

TV legend Bert Newton is in hospital receiving tests but is on the mend, reports News Corp’s Fiona Byrne.

Newton was taken to hospital in recent days in Melbourne with his family and friends sending their love.

Newton’s wife, Patti took to social media to reassure fans that the Australian TV icon was in good hands and on the road to recovery.

“Bert’s been in hospital, all good. He’s got a lot of living to do,” Patti posted.

Patti’s Instagram account was flooded with comments from friends and show business identities who quickly rallied behind Newton to wish him a speedy recovery.

Where are they now? What your favourite Blockheads are up to

There can be no doubt that the juggernaut that is The Block can have a life-changing impact for contestants, reports Domain’s Jessica Dale.

Not only is there the opportunity to bag $100,000 in winners’ prize money as well as any profits from auction day, but the renovating show is often a launchpad for many former Blockheads.

While some embrace their 15 minutes of fame then return to their former jobs, others have embarked on successful new careers in interior design, construction and fashion.

Elyse Knowles was one of the most high-profile personalities to appear on The Block. The model and her carpenter partner Josh appeared on the show in 2017 and pocketed a cool $547,000 after selling the home to comedian Dave Hughes. 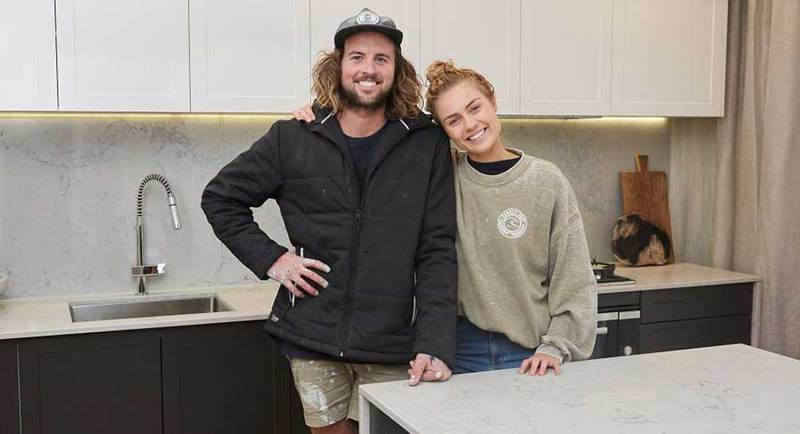 Since their winning stint on the program, the pair sold their renovated home in Melbourne’s Coburg before moving to Byron Bay in 2019.

They’re probably most well-known for the artistic flair they showed in The Block Sky High season, after judge Neale Whitaker dubbed their Jackson Pollock-inspired bedroom a “crime scene”. The renovated apartment in South Melbourne nabbed the pair a $250,000 profit and recently hit the market for the second time, selling for $1.9 million in July.

The Perth-based couple have since toned down their garish style, launching a highly successful concrete business Nood Co., specialising in bathroom basins and furniture.

Cricket will be forced to make a call on the Adelaide Test sooner rather than later with broadcasters hoping for an answer by Monday, reports News Corp’s Peter Lalor.

A call on the future of Will Pucovski and Cam Green is also fast approaching.

Any optimism felt when South Australia reported no new coronavirus cases on Thursday was tempered by news that Victoria had joined all the other states except NSW in imposing restrictions on travellers from Adelaide.

The 48-hour ban will stay in place until a permit process is introduced on Saturday night.

If travel between Melbourne and Adelaide was blocked though December it would create problems for production crews and others involved with the tour, with only four days between the Adelaide Test and the Boxing Day Test.